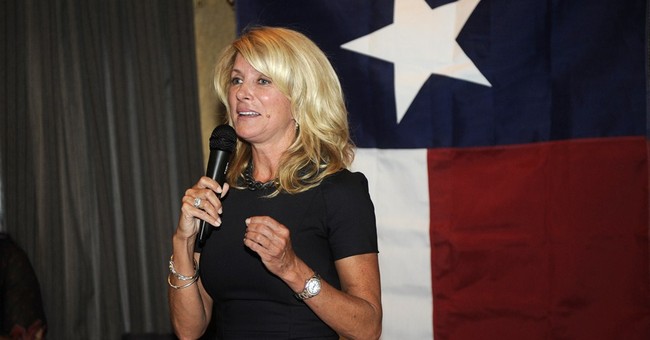 The Left’s latest political celebrity has made it official, with Texas state Senator Wendy Davis kicking off a bid for governor owing its genesis to a filibuster of legislation banning restricting abortion after 20 weeks.

That fact alone serves to undermine any rationale for her viability.

Yet that’s only the tip of the iceberg when it comes to Davis, who pivoted from abortion to gun control prior to her formal announcement.

Weeks ago, an interview with The Texas Tribune found her reaffirming past support for tighter gun restrictions on firearms sales between individual as well as prohibiting gun shows on county party. Though claiming it won’t be a priority, she made clear it was “still the right thing” and would sign into law any bill on the topic that came to her desk.

As an unexpected irony, the city of Austin attempted similar restrictions earlier this year, found themselves met by Attorney General Greg Abbott’s threat of a “double-barreled lawsuit,” and subsequently balked.

Abbott is the near-consensus GOP nominee for next year’s election, enabling contrast with his Democratic opponent before the opening bell of Round 1.

Absent yesterday’s proceedings was mention of either topic, both issues that have already served to alienate Davis from key constituencies in deep-red Texas. Instead, education, transparency, and the expected red state Democratic tact of stressing non-partisanship found their way into the rhetoric.

Yet does anyone think the reasoning behind Leftward pushes, both nationally and in-state, for her candidacy will be so easily swept under the rug now that its primetime?

To boot, Davis’s own alleged ethical misgivings already find themselves called into question, painting a picture of hypocrisy on the campaign’s second day.

Beyond apparent confusion about which state she’s running in, the political reality of Texas is that a path to victory simply isn’t there.

The state’s not given a Democratic presidential nominee its electoral votes since 1976, nor a gubernatorial candidate the keys to the mansion since 1990. Just last year Ted Cruz rolled to election on the same ballot with Mitt Romney, who captured 57 percent of the Lone Star State’s vote.

Davis’s own Senate district was carried by the GOP nominee, which could prompt casting the decision to run statewide as an out, lest a re-election bid found itself upended by her filibuster antics.

Moreover, Texas bucks demographic trends national forces so often point to as means of the Left’s would-be resurgence. Polling data from 2010 saw only 18 percent of Latino respondents describe themselves as liberal, compared to 54 percent conservative in some form.

Abbott himself netted 38, 42, and 48 percent of the vote in traditionally Democratic, heavily Latino counties running along the state’s southern border, providing further indication the state isn’t beholden to national norms.

Nor will it come from tapping a candidate whose issue positing makes her a better fit for California or Vermont than a state beaming with pride at the success of its conservative economic model.