Brad Slager
|
Posted: Jun 20, 2022 10:30 AM
Share   Tweet
The opinions expressed by columnists are their own and do not necessarily represent the views of Townhall.com. 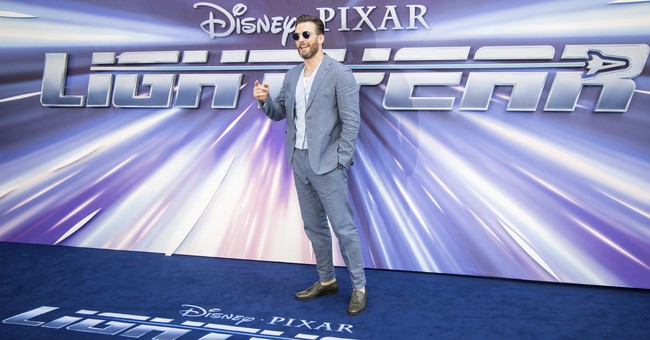 This weekend was a curious one for the animation giant Pixar, as it met some headwaters while it was primed to release its latest theatrical offering, "Lightyear." As the weekend culminates, there is some disappointment felt, as the reality of its underperforming has arrived. Projections pegged the family pic earning $70-80 million, but now it is regarded as more of a flameout on the launchpad. The final take this weekend was $51 million, and the movie was not even the top-grossing title, failing to unseat "Jurassic Park: Dominion."

This was the successful studio resorting to a current formula seen at parent company Disney of creating backstory releases for established characters. Like the streaming series "The Mandalorian" and "Obi-Wan," this is a look at the inspiration behind the toy character Buzz Lightyear from the massively successful "Toy Story" franchise. The future prospects do not look encouraging. With a production budget of $200 million, the box office cut and promotional expenses mean that likely this film needs close to a $450 million worldwide gross to break even.

While there had been questions from fans about whether this approach to the story was valid, there was also some hesitancy behind the decision to turn over the acting role to Chris Evans, a departure from the well-established years of Tim Allen voicing the popular figure. But much of this potential negativity was to be negated by all the favorable press the production received. This was another sign of trouble, in truth.

What had the press all abuzz was that there would not only be a same-sex couple featured, but the two female characters would share a lesbian kiss onscreen. Many journalists raved over how landmark and historical this would be. Then word came last week that the film would not be permitted to show in the United Arab Emirates and over a dozen other Muslim countries due to the embrace. But this was actually a negligible loss of commerce, as those are small markets.

But as I explored ahead of the release, the real question was going to be how much of a benefit would Disney realize domestically as a result? I had speculated that not only was the LGBT+ movie audience relatively small, but one had to also consider how many families would decide to forego the film for the very same content. This was, after all, a children's/family picture into which this significant messaging was being inserted.

Then it should have been factored in that Disney absorbed significant negative feedback from the public these past few months over the controversy in Florida and the parental rights in education bill. That entire battle – which the company elected to enter into – was centered around this very type of material being inappropriate for younger children. It can be theorized that the company made this move due to the flare-up.

Initially, Disney had approved Pixar to include the lesbian match-up but had balked at displaying the embrace. In March, however, Disney shifted its stance and gave Pixar the greenlight to restore the lesbian kiss; this was about the same time internal strife among LGBT+ employees at the two companies was rising, as those factions were vocal about the corporate positions on the Florida matter. After pledging to battle the Florida law, Disney suffered bad PR, a drop in approval in polls, and the stock plummeted even before the current bear market.

This all should be considered as influences on the poor performance this weekend. Yet, in looking at the title delivering at least -25% under the low expectations, the press will not acknowledge the prospect of this activism shoehorned into a kid's film having a negative impact. Variety posited that either it was a diluted offering from the established franchise or that due to the pandemic, audiences have been conditioned to watch animated titles on streaming services. CNN echoed these theories and pointed at tepid reviews and a less-than-excited response to the trailers.

It is quite notable that the press, which could not say enough about the lesbian characters last week, cannot manage to contemplate if the highly-touted content had any impact on the net result this weekend. That denial speaks as much as does the depressed turnout this weekend.