Brad Slager
|
Posted: Jan 28, 2021 12:01 AM
Share   Tweet
The opinions expressed by columnists are their own and do not necessarily represent the views of Townhall.com. 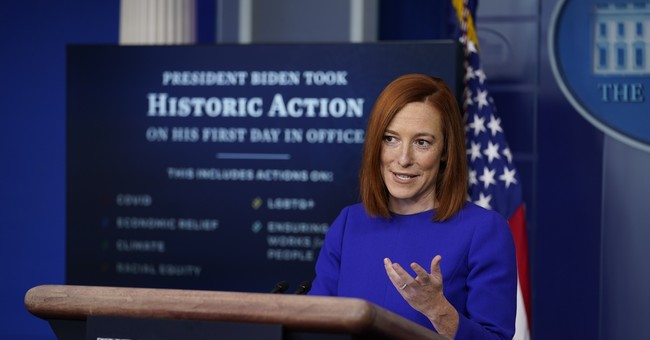 To suggest the media has been exhibiting a distinct tremulous excitement upon the arrival of Joe Biden’s administration is to traffic in understatement. These arrested adolescents have been singing the praises of a new era in truth and respect for the media...all while lying consistently and behaving in disrespectful fashion. What has become quickly evident is that as they are shouting praise for a new adherence to the facts those who are struggling with a Biden arrival are the media fact-checkers.

The past 4 years had been scintillating for these referees of verite’. They had a bumper crop of material from Donald Trump and no shortage of umbrage to deliver their corrective missives. Notepads and scorn were ordered in bulk as they worked feverishly to keep the vile leader in the White House in check, but now what are they to do? They have a President in Biden they favor, and therefore do not want to display as dealing in altered states of truth. They are arrested from enforcing their own stated goal.

For a perfect display of this  conflict we need only look at the flailing from Glenn Kessler. If unfamiliar, Kessler runs the Fact Checker at The Washington Post, and he has not appeared to be as giddy as his journalistic brethren with Biden’s arrival. For starters, last Wednesday as the media were aglow in beatific harmony Glenn was otherwise occupied; he spent the bulk of that inaugural day tweeting about Donald Trump. Over a dozen times he referenced the man on the day most were claiming they were happy to be rid of him.

The ensuing days were rather tough on Glenn. It began last Monday when, not unlike a movie trailer, Kessler teased his hands-off approach to the administration by declaring that newly appointed White House press secretary Jen Psaki was going to be delivering ‘’reality-grounded press briefings’’. Nothing like a fact checker announcing his findings on an individual’s performance before they even begin their job. (That Psaki managed to display challenges to his claim in the matter of two days is a bonus.)

With his declared permissive attitude established Glenn struggled to justify not reporting on Biden’s battle with the truth on a number of issues, in just his first week in office. We can start with the announced executive orders regarding travel. Biden first reinstituted restrictions on travel from Europe, which President Trump recently rescinded, and then President Biden added in South African restrictions as well, all in the name of Covid safety. These, of course, draw up memories of Biden referring to Trump’s actions as ‘’xenophobic’’ early last year, when he first instituted bans from China.

Then to compound the confusion, as he was banning travel from most countries Biden opened up travel from those listed in the misnamed ‘’Muslim travel ban’’. A purely political maneuver that defies logic, this means Biden was placing bans which he previously criticized while at the same time taking down other bans, despite claiming a need for safety. So has Kessler & Co. at The Post weighed in on any of these contradictions? Nope, they have quietly backed away from any corrections.

However Glenn did weigh in on another issue, the Keystone oil pipeline closure. He felt the need to fact check Senator Ted Cruz on his claim on how many jobs were being eliminated by halting the construction of the pipeline. Glenn found a curious qualifier in order to criticize the contention made by Cruz.

Accurate, but untruthful? This means that in order to dispute the 11,000 jobs figure we need to declare that temporary construction jobs do not count. That seems handy...and arbitrary. As Cruz noted, in a response to Kessler’s claim, ‘’ALL construction jobs are temporary. Presidents still shouldn’t destroy them.’’ Then, to make his summation even worse, Kessler was also disproving another source on the Keystone jobs -- Himself.

Glenn had previously provided a fact-check on Keystone work years earlier, asserting that only 16,000 jobs would be created. Now it seems Glenn is himself in need of a fact-check; this is not something that should be left to him, it is safe to say.

Compounding his reputable challenges, Glenn next attempted to appear diligent in covering Joe Biden’s ever-shifting stance on fracking. Considering Joe has been all over the map on the issue a fact-check was certainly needed. Instead, Kessler endeavored to defend Biden, a dicey proposition since whatever stance is taken is assured to be disputed by a previous stance.

One of Biden’s other executive orders was to halt licensing for fracking on Federal lands. He has declared during the Democratic debates that he would eliminate fracking, then on the presidential campaign - when in need of votes - he backtracked to say he supported the drilling. Now he tries to split the difference, banning some fracking, allowing existing fracking, and upsetting people on both sides of the issue in the process.

Miller had a firm rebuttal -- from The Washington Post.

Here's The Washington Post disagreeing with you. Fact check! pic.twitter.com/1YxyrXtGrN

Kessler thought he had a solid retort: ‘’I repeat: headlines do not equal policies. But play your games if you want! Always amusing.’’ Bypassing that the headline derives from his own paper, Glenn manages to overlook a basic (dare I say it) fact -- the quotation marks in the headline indicate they are Biden’s own words. Glenn’s apparent standard here is that he does not fact-check headlines, so if the quote appears above the article then he is above looking into the matter.

As if he was trying to defy his own practice of fact checking, Kessler practically dared people to correct him on a general claim. As he continued explaining himself Glenn stated that he had no foreseeable plans to begin a Biden lie tracker, and then managed to jump on a rake with 2 feet. ‘’We had no plans at this point to start a Trump tracker. The constant tweeting of falsehoods forced our hand.’’ To put this statement into a perspective he might grasp, you can rate this comment with 5 Pinocchios.

This is a laughably false comment by WaPo's ''fact-checker''.
Kessler and his crew were tabulating Donald Trump's lies on the day he was sworn in, correcting statements from his inaugural address. Last week he even stated he began tracking lies on Trump's first 100 days. https://t.co/1G5knM2KwP pic.twitter.com/2B9sxHuAbY

Get ready folks. This is the current state of journalism. They have shifted from 4 years of obnoxious behavior to now proudly engaging in malpractice and gaslighting.