Brad Slager
|
Posted: May 12, 2020 11:24 AM
Share   Tweet
The opinions expressed by columnists are their own and do not necessarily represent the views of Townhall.com. 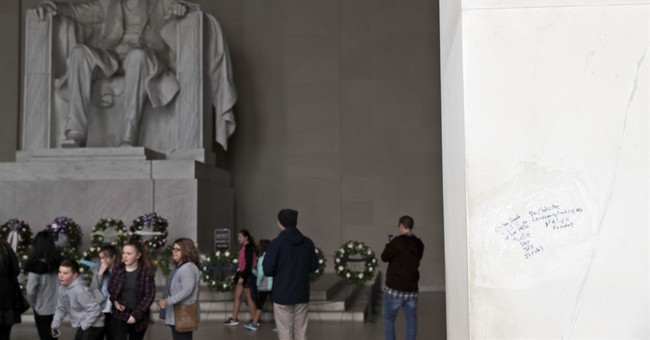 On May 4 news outlets ran excitable stories of a shockwave sent through the nation’s capital and felt directly in the White House. The cause of this D.C. detonation was a commercial, a political campaign ad that ran on Fox News. Entitled "Mourning In America’’ the spot displayed a nation in tatters and laid all of the carnage displayed at the feet of President Trump. Not a commercial for a candidate, it was an opposition piece produced by the political action committee The Lincoln Project, run by a collection of avowed Never Trump names and financial backers.

By Tuesday morning the president sent out a flurry of tweets responding to the commercial, touching off a wider media storm that greatly exceeded the public reaction. Trump’s reaction was seen as a windfall for the group and members of the PAC gleefully appeared before any camera and microphone to crow about how they needled Trump, who has a history of responding in this fashion to innocuous prompts, be it an impertinent question at a press briefing to a toss away comment made by Joy Behar. To the Lincoln Project contrarians this was something of a political coup.

Membership in the PAC is a rogue’s gallery of some of the loudest names who have risen to a layer of film atop the Never Trump sump pond. George Conway is a lawyer, recidivist anti-Trump tweeter and husband to White House fixture Kellyanne Conway. GOP campaign organizer and CNN vulgarist Rick Wilson is found, as is MSNBC fixture and former Republican campaign wonk Steve Schmidt.

Wilson gave an exuberant interview where he trumpeted what an accomplishment their commercial had been, with some curious boasts. “We were able to take an ad ...and freeze the Trump campaign for two and a half days,’’ claimed Wilson, not really detailing what this entailed, since Trump was otherwise occupied. I guess his campaign staff responding, as they are tasked to do, is regarded as freezing them...we presume? “They did nothing else but punch us, lose control of their messaging apparatus,’’ he continued -- referring primarily to tweets. That is ‘losing control’, these days; “and lost control of their campaign management system.’’ I am at a loss how a commercial accomplished this system breakdown, and Wilson offered no clues to his fantasy boasting.

However, the party poppers were barely done echoing on The Lido Deck aboard the S.S. Bulwark when bad news descended quickly. It turned out that despite the media giddiness over the enterprise not everyone was swayed by the claims in the commercial. By Thursday, Wilson had tweeted out a pithy but morose missive.

What had the cantankerous curmudgeon feeling cranky was the announcement that Facebook was placing a warning label on the video before playback on its platform. Wilson groused further about it: “The Trump allies at Facebook are censoring the ProjectLincoln "Mourning In America" ad page with a b.s. "fact check." They’re doing everything they can to stop you from seeing this ad.” Behold the unhinged emotional reactions from the OMB-TDS-afflicted. Facebook took this action as a result of its primary third-party fact-checking partner, Politifact. Anyone believing that this laughably leftist source is somehow in the back pocket of the White House must have a desperately vested interest in getting their video seen.

What Politifact took exception to in the video is when it declares the coronavirus relief funds from Washington were a big business payout. "Trump bailed out Wall Street, but not Main Street,’’ according to the voiceover. As Politifact noted, three quarters of the loans in the Paycheck Protection Program were paid out to businesses with 10 or fewer employees.

What Rick Wilson took exception to also involved payouts—his own. Prior to the Facebook lockdown, the Lincoln Project declared they experienced a huge surge in donations after the ad ran. Clearly any interruption in playback, and the announcement of false content, has to be seen as the money spigot being turned lower, because in true Never Trump fashion The Lincoln Project is nothing more than an enrichment program.

Since its inception late last fall the Lincoln Project has raked in millions. It is using some of that money to run ads like “Mourning In America’’, but the bulk of the funds - about 90 percent - is paid to enterprises owned by members or gets dispersed directly to them. We see this in how “Mourning’’ was used. Most viewers of Fox News woke to the media announcements Tuesday confused; they had not seen this impactful commercial. That is because it was a targeted hit.

The commercial only ran in a local ad slot in the D.C. broadcast area. This was sufficient to get notice from The Beltway media outlets, doubtless boosted by the video sent to other media offices outside of town. In his interview, Wilson bragged their outfit only spent $5,000 to have the commercial aired. We see their methods when we peer into their financials and see how they spent their cash.

The FEC filings for the PAC show that work for the Trump commercial in the DC area involved payments over $120,000. These payouts went to two production companies -- Summit Strategic Communications LLC, and TUSK Digital. Most of the money was spent with SSC, owned by Lincoln Project Member Reed Galen. TUSK is owned by member Ron Steslow. Not a bad grift if you can get it. As Wilson said in his interview, “Mourning In America’’ took them only a few hours to produce, resulting in over $100,000 in payouts to members.

When you go to the Lincoln Project website you are greeted with pleas for donations and the portrait of our 16th president, yet for all of the images they could have gone with they properly opted for that found on the $5 bill. The money they hoovered in since formation has primarily been derived from Democrats. The top money taken in so far in 2020 has come from the likes of Wal-Mart figure and Dem donor Christy Walton, and silicon valley Billionaire Ron Conway.

This follows the course of the Lincoln Project members, and their affiliated derangement sufferers. With the exception of Conway, the rest of the listed members all bear the title of ‘’political strategist’’, with the announced mission of taking down President Trump. Yet these political veterans have never managed to bring forth new names who espouse their claimed adherence to conservatism. You will not see GOP candidates being sold who are devoted to the Constitution and representing the new wave of conservative thought.

The result is an outfit that drapes itself in GOP iconography operating on a budget arriving from the left, working only on opposition hit pieces on Republicans, and pocketing the vast majority of its funds for themselves. The PAC has officially come out and endorsed Joe Biden.