The Left and Much of the Media Sow Division While Trump, Kushner, and the Administration Save Lives

Boris Epshteyn
|
Posted: May 12, 2020 12:37 PM
Share   Tweet
The opinions expressed by columnists are their own and do not necessarily represent the views of Townhall.com. 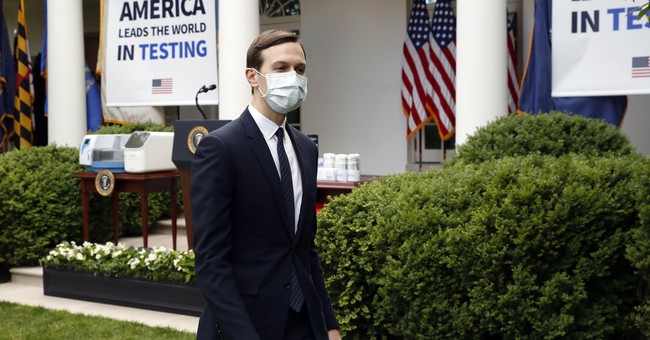 As President Trump continues to lead America in the war against COVID-19, he and his team continue to take unfair incoming attacks from the left and many in the media.

That onslaught is quite ironic, since the American people currently distrust the media at record levels because while we are living through the horrors of the COVID-19 crisis, Americans are sick and tired of many members of the media acting as leftist political operatives obsessed with going after the president and his administration.

Specifically, Senior Advisor to the president Jared Kusher has been a key part of the Trump administration’s efforts to save as many lives from COVID-19 as possible. Jared Kushner has done more for Americans in the past few months than most of the media will ever admit.

In a simpler, saner America, the media would be lauding Kushner for his efforts. But because Kushner is part of the Trump administration, and because the work he is doing is part of President Trump’s bold and comprehensive response to the Wuhan virus crisis, Kushner is attacked in a way that a member of a Democrat administration never would be.

The left and its many allies in the media choose to criticize and pounce on a man who does not seek out public credit for his own accomplishments, and who has given up a lot to serve and safeguard the American people during his over three years at the White House.

I know firsthand how tirelessly Jared Kushner is working to protect Americans from the emotional, physical, and economic impacts from this coronavirus outbreak.

As the president and his coronavirus task force have been publicly informing and guiding the American people since the start of the outbreak to help flatten the rate of the virus’ spread, Kushner has been working behind the scenes with FEMA and other agencies to secure the supplies our health care professionals desperately need.

Kushner is the White House “point person” for Project Air Bridge, which is a strategic mission to help speed the delivery of personal protective equipment and critical medical supplies from manufacturers overseas. Half of these supplies go to customers, while the other half are reserved for COVID-19 hotspots identified by the Centers for Disease Control and Prevention.

While these products would normally take weeks to fly into the U.S. from foreign factories, Project Air Bridge is getting vital resources to the people who need them within a matter of days.

Kushner has been in constant contact with medical supply distributors, as well as state and local officials across the country to make sure state stockpiles are being expanded and replenished. He has arranged for millions of face masks, gloves, respirators, and thermometers to be flown directly to New York City for immediate use by those at the center of America’s COVID-19 hotspot.

Most of the media, however, completely ignore these life-saving endeavors, and House Democrats are again cynically trying to use Kushner as their punching bag while falsely accusing the president of nepotism. Career politicians who have seldom produced anything of value themselves are now screaming “favoritism!” because Kushner is working with the private sector to rapidly mass-produce medical supplies needed to save American lives. Americans see right through these absurd broadsides.

In another ludicrous example, Kushner was attacked by The New York Times and other media outlets for the makeup of the staff helping source PPE at the height of the crisis, as states desperately search near and far for gear they can provide to medical professionals in order to keep them safe. This was yet another useless media smear on one of President Trump’s top advisors who is helping to save countless lives during this pandemic.

Anyone possessing a shred of honesty would have to acknowledge that President Trump’s bold leadership and the diligent, tireless work of Jared Kushner and many other top notch Trump administration professionals have saved this country from experiencing the sort of devastating medical supply shortage, and therefore more widespread loss of life, that many other countries have faced.

Unfortunately, the majority of Democrats and their cohorts in the mainstream media are determined to continue to stoke division and attack President Trump and the leaders around him at a time when our country needs unity most of all.