Claims of a Labor Shortage Are Just Not True

Bob Harden
|
Posted: Oct 19, 2019 12:01 AM
Share   Tweet
The opinions expressed by columnists are their own and do not necessarily represent the views of Townhall.com. 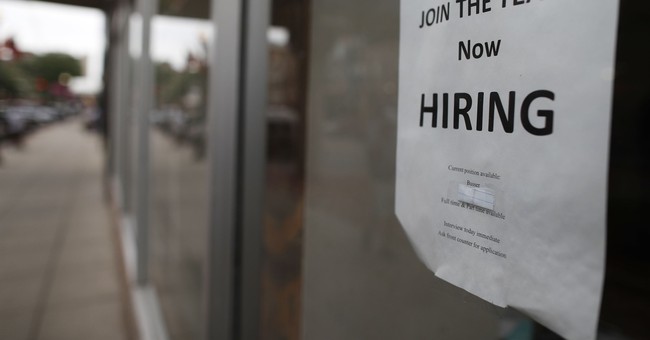 America's September unemployment rate fell to 3.5 percent, the lowest level since 1969, according to the most recent Department of Labor report.

The tight labor market is forcing companies to hire disadvantaged Americans. For example, New Seasons Market, a West Coast grocery chain, is actively recruiting people with disabilities and prior criminal records. Similarly, Custom Equipment, a Wisconsin manufacturing firm, recently hired several prison inmates through a work-release program and intends to employ them full-time upon their release.

For the first time in decades, these disadvantaged Americans are finally winning significant pay increases. Over the past year, the lowest-paid 25 percent of workers enjoyed faster wage growth than their higher-paid peers.

Unfortunately, this positive trend could be short-lived. Corporate special interests are whining about a labor shortage -- and are spending millions to lobby for higher levels of immigration, which would supply companies with cheap, pliable workers.

Hardworking Americans need their leaders in Washington to see through this influence campaign and stand up for their interests. Scaling back immigration would further tighten the labor market, boosting wages and helping the most disadvantaged Americans find jobs.

The U.S. economy is the strongest it has been in years. Employers added 136,000 new jobs in September, marking 108 months of consecutive job growth.

But there's still more progress to be made. Approximately 6 million Americans are currently looking for jobs but remain unemployed. Another 4 million desire full-time positions but are underemployed as part-time workers. Millions more, feeling discouraged about their bleak prospects, have abandoned the job search altogether. Indeed, among 18 through 65-year-olds, 55 million people aren't working.

Many of these folks have limited or outdated skills. Others have criminal records or disabilities. So they might require a bit more training than traditional job applicants.

Rather than put in this extra effort, some big businesses want to eliminate their recruiting challenges by importing cheap foreign workers. These firms have instructed their lobbyists to push for more immigration, which would introduce more slack into the labor market.

The CEO of the Chamber of Commerce recently claimed that America needs a massive increase in immigration because we're "out of people." Chamber officials said their lobbying efforts would center on sizeable increases to rates of legal immigration.

And the agriculture industry is lobbying for a path to legalization for illegal laborers and is seeking to expand "temporary" guest-worker programs to include stable, year-round positions on dairy farms and meatpacking plants -- jobs that Americans will happily fill for the right wage. The Association of Builders and Contractors, Koch Industries, and dozens more companies have called for similar measures.

There are already 45 million immigrants in the United States -- 28 million of which are employed -- and counting. More than 650,000 people crossed into the United States illegally in the past eight months alone, already exceeding last fiscal year's totals. And the U.S. government grants an additional 1 million lifetime work permits to immigrants every year.

Those figures will skyrocket even higher if business groups get their way. Such an expansion would hurt hardworking Americans.

The majority of foreigners who cross the border illegally or arrive on guest worker visas lack substantial education. Naturally, they seek out less-skilled jobs in construction, manufacturing, agriculture, and service -- and directly compete with the most economically vulnerable Americans. The labor surplus created by immigration depresses the wages of native-born high school dropouts up to $1,500 each year.

A recent bill from Senator Chuck Grassley (R-IA) would mandate all businesses use a free, online system called E-Verify, which determines an individual's work eligibility in mere seconds.

The system would make it extremely difficult for employers to hire illegal immigrants, roughly 40 percent of whom have been paid subminimum wages at some point. Without a pool of easily abused illegal laborers, businesses would raise pay for Americans.

It's time for our leaders in Washington to scale back both legal and illegal immigration. By doing so, they can further tighten the labor market and force businesses to bring less-advantaged Americans back into the workforce.