Bob Carlstrom
|
Posted: Mar 07, 2020 12:01 AM
Share   Tweet
The opinions expressed by columnists are their own and do not necessarily represent the views of Townhall.com. 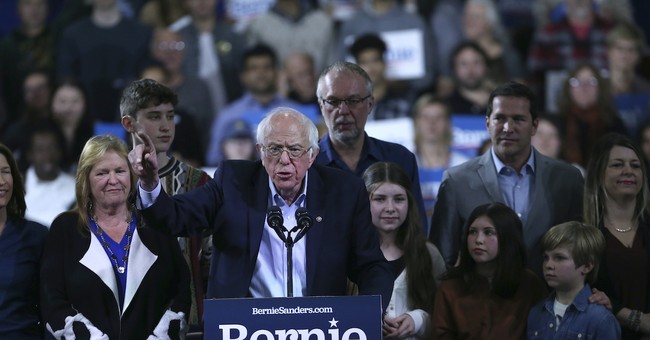 On the contrary, the presidential candidate’s sweeping promises to provide “free” healthcare, “free” college, “free daycare and solve the so-called climate crisis are illusions that, if enacted, would devastate our economy.

Indeed, flesh out the Vermont Democrat’s platform and one sees he’s definitely not peddling gum drops. He’s proposing a nationalized insurance system that provides “everyone in America with comprehensive health care coverage …”

It’s impossible to implement such a plan without disastrous effect.

As even the New York Times admits, “At the heart of the ‘Medicare for all’ proposals championed by Senator Bernie Sanders and many Democrats is a revolutionary idea: Abolish private health insurance.”

If we tear down private insurers, however, it would call into question the well-being of millions suddenly cut off from their private-health insurance.

As the Wall Street Journal says, “[Medicare for All] would upend the current health-care system and erase employer-sponsored coverage, which is how roughly 155 million Americans now get insurance.”

To add insult to injury, obliterating private health insurers would render certain stocks worthless and cause everyday Americans’ retirement portfolios to crash in much the same way they did during the Great Recession.

“We’re talking about changing flows of money on just a huge scale,” Paul Starr, Princeton University sociology professor, tells the New York Times. “There’s no precedent in American history that compares to this.”

Sanders and people who fall for his socialist schemes are wearing rose-colored glasses. And anyone who believes that “health-insurance-for-all” means “healthcare-for-all” will be sorely disappointed.

More importantly, if Americans thought times were tough a decade ago, they had better brace for impact because Bernie’s socialist candy isn’t so sweet after all.

In fact, a bitter taste will linger for decades if he has his way on health insurance as it will cost Americans an estimated $40 trillion over 10 years.

As Charles Balhous, a public trustee for social security and Medicare says, that’s “a federal tab so large that even doubling all projected federal individual and corporate income taxes couldn’t finance it.”

It’s neither a workable idea, nor is it a prudent one.

What’s the price tag on forgiving student-loan debt and paying for public higher education? It’s $2.2 trillion over 10 years. The plan is madness.

A recent study from the American Enterprise Institute shows that the more public funds that are pumped into higher education, the more costs grow.

That burden is going to fall on the American taxpayer, and it’s not fair to those who have already paid off their student loans.

Even Sanders’ plan to address climate concerns is so unfair and radical that it turns off more level-headed moderates.

“What the Sanders proposal would do is create an 800-pound federally owned power gorilla that would make it very hard for the existing generators to compete,” says Josh Freed, climate and energy expert at Third Way.

“I think a plan like this could turn off voters in large parts of the country. It would have challenges in Pennsylvania, Michigan—a lot of the states that are competitive for the election.”

Instead of creating competition in the energy market, as Bernie and his defenders argue, Sanders’ plan would put private energy providers out of business, leaving Americans with a single government-owned energy provider.

Taxes inevitably would increase to fund the gargantuan takeover of the industry and, with no competitors to keep them in check, prices on government-controlled energy would skyrocket.

No thanks, Sen. Sanders. Keep your “free” handouts, wrap them in a sigh, soak them in the sun and make a groovy lemon pie.

Bob Carlstrom is the chief of staff of the 2 million-member Association of Mature American Citizens (AMAC).