Who's Responsible in the White House? 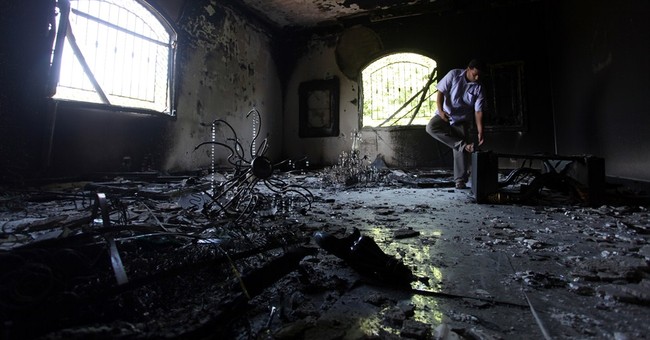 Scoff if you like-but it's true. A paranormal event has escaped the attention of the mainstream media. Not only is the White House haunted, we know the name of the ghost: It's “Not Me”.

It's not like he's unknown either! Bil Keane made him famous in the wildly popular syndicated comic strip Family Circus. Remember in the famous strip when something at the family home went wrong and no one would take responsibility? "Did you break the lamp?" Immediately there was a choir of instant denials. But, there in the background was the little ghost called Not Me. "Who spilled the milk all over the floor?" There he was again running through the kitchen with milk clearly on his shoes. Well, clearly the little devil has moved from the comic strip to the White House!

Four Americans were savagely killed in our country's service in Benghazi. Something went terribly wrong. We now know that months before the disaster our personnel on the ground in Libya begged for more protection and it was denied. We also know that on the night of the attack there was a desperate cry for assistance and no one came. Our government was warned on numerous occasions that an attack was very possible and yet no preparation was made for the defense of our citizens. Someone or possibly many were responsible for these terrible miscues and yet when questions are asked of basically anyone in this administration, the answer is always the same: Not Me did it!

Evidently, however, the little specter is not confined to the White House grounds but moves around the entire administration. The IRS scandal hit the news cycle like a cyclone. Conservative groups were intentionally and unconstitutionally targeted and harassed by the incredibly powerful taxing wing of our government. Daily, we are learning that it was much more widespread than we were first led to believe. Dozens had to be involved and the decision making had to rise to levels of considerable authority. Yet, when anyone at IRS is asked about the scandal, guess who actually did it? That's right-Not Me!! There he is again! The current head of the agency, wilting under TV lights, placed the blame squarely on that little apparition. In fact, many within the agency have fingered the same culprit-the one and only Not Me. The President communicated his absolute disgust at what had happened and named the responsible party. You got it: Not Me. His Press Secretary placed an exclamation point on the accusation by affirming that it was indeed. Not Me. Busy little guy for sure!

There is of course, the other major scandal at the Justice Department. An historic and unprecedented seizure of telephone records from a major American news agency. In the final analysis this could have the potential to be the biggest scandal currently rocking the administration. The mainstream media that has willingly sheltered this president and all associated with him have now been attacked themselves. Suddenly it's not "them" it's "us" who are feeling the pressure of an ever-expanding and intrusive government. The sleeping lion of the media has suddenly been awakened and they certainly have a history of devouring anyone who shakes them from their slumber. Common sense would tell you that an investigation this big, this historic, and this unprecedented with this much potential for outrage would have reached the very highest levels of management within the Justice Department. It would seem absolutely reasonable to conclude that The Boss himself would have been consulted. That is not the case, however! We know there is going to be a huge investigation, congressional hearings, and media scrutiny unseen during this President's tenure and it's all unnecessary. Several individuals of rank and responsibility have already outed the responsible party. Attorney General Eric Holder looked sternly at the cameras and announced that this was the work of Not Me. The President was asked about the situation and he declared for the entire world that it was Not Me.

There will be weeks, possibly months of hearings, investigations and the like costing the tax payers millions of dollars. Why? What's the use? We already know who's responsible! To a person, everyone in this administration who actually knows the truth has identified who did it all. I say we capture the little phantom and take him to the National Mall for all to see. But wait, can you do that with a ghost?