Bob Barr
|
Posted: Sep 26, 2018 12:01 AM
Share   Tweet
The opinions expressed by columnists are their own and do not necessarily represent the views of Townhall.com. 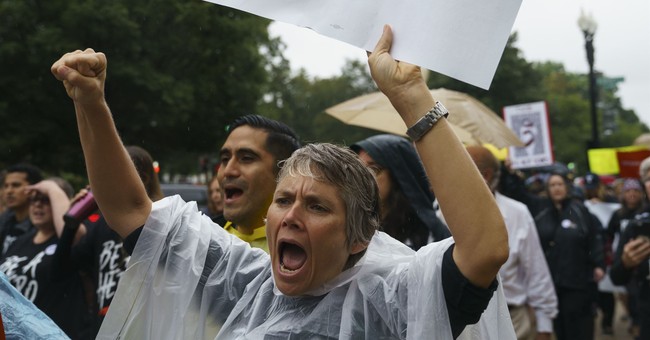 From the safety of the historian’s perspective, what made the French Revolution’s “Reign of Terror” truly terrifying was not the streets of blood or the crash of guillotines, but the Revolutionary government’s utter rejection of the rule of law in order to satisfy the people’s bloodlust during that moment in time. When it was decided that justice must be served quicker and more efficiently when facing enemies of the new order, pillars of western civilization were simply cast aside in favor of mob “justice.”  Public trials, legal representation, verdicts short of death sentences -- all were deemed nuisances to the changes sought by the revolutionaries; and all were discarded with an ease that was truly frightening.

Today, Supreme Court nominee Brett Kavanaugh would be justified in feeling as if he has been transported back to Paris in 1793, as his accusers in the United States Senate scream hysterically about the hindrances of due process in pursuit of their concept of “justice.” To them, the unverified accusations of an accuser are more than sufficient grounds to send the Judge to the chopping block.  His senatorial accusers and the mob they represent “feel” his guilt, with the coup de grace being his membership in a class of persons each guilty by association – white men.

“Her credible allegation of sexual assault against Brett Kavanaugh should disqualify him from ever being confirmed to the Supreme Court,” Sen. Kirsten Gillibrand stated more than a week ago, just days after Christine Ford’s accusations were leaked to the media. Meanwhile, Sen. Mazie Hirono told CNN that Kavanaugh’s “credibility is already very questionable” based on nothing more than her distaste for his judicial rulings; clearly implying he is not due the same presumption of innocence as others. In the minds of both Gillibrand and Hirono – two sitting U.S. Senators – Kavanaugh was rendered guilty the minute he accepted the president’s nomination; and no evidence could rise to the level of providing a basis on which they would consider changing their verdict.

Democrats have reached a new level of intellectual corruption with their smear campaign against Kavanaugh.   In the process, they have essentially rendered Ms. Ford’s allegations nothing more than a political trump card with little, if any, real concern for her well-being. This conduct alone should shake the core of Americans who already fear the political process in Washington has become untenably toxic.

It is the complete and visceral contempt of due process exhibited by Gillibrand, Hirono and their colleagues (and echoed by the Mainstream Media) that should have Americans truly fearful.

The lessons for what America would look like under such a regime are not theoretical. Recent American history, particularly during the Jim Crow era in the South, offers examples of what justice becomes when shortcuts to due process are taken; when the “guilt” of the accused is already presumed, especially in that era when accusations against black men were leveled by white women. Even today, negligence in the judicial process can be a blight on marginalized communities that lack both the education and resources to adequately defend themselves when falsely accused. Yet, Democrats – who regularly profess themselves the “champions” of the downtrodden -- would further weaken the standard for guilt and the standards for due process, merely because they see such a move as favoring their short-term political goals.

While the Democrats’ strategy to wait until the last minute to ambush Kavanaugh and ultimately to delay the nomination of any Trump pick is carefully orchestrated political theater, it is the animus to the rule of law afforded their perceived enemies across the board that should deeply worry America. Whether it is the Electoral College, which they believe was responsible for lifting Donald Trump over Hillary Clinton two years ago, or the theory they could simply pack the Supreme Court with new seats to dilute a conservative majority, Democrats clearly are willing to destroy any tradition or safeguard of American democracy in pursuit of the power they have failed to gain at the ballot box.

Ironically, with this unbecoming conduct Democrats may have reenergized a Republican electorate that might otherwise have stayed home in November, disillusioned with a Republican Congress that has failed to take advantage of their congressional majorities. Now, engaged voters are able to see what is really at stake if the “blue wave” Democrats crave actually comes to pass in six weeks.

The French Revolution’s Reign of Terror lasted 10 months from 1793 to 1794.  If the current crop of Democrat nihilists win the mid-term elections in November, the damage the Rule of Law would suffer in 21st Century America will be far longer.