GOP Conservatives Were “Loyal” – To Principles

Bob Barr
|
Posted: Mar 29, 2017 12:01 AM
Share   Tweet
The opinions expressed by columnists are their own and do not necessarily represent the views of Townhall.com. 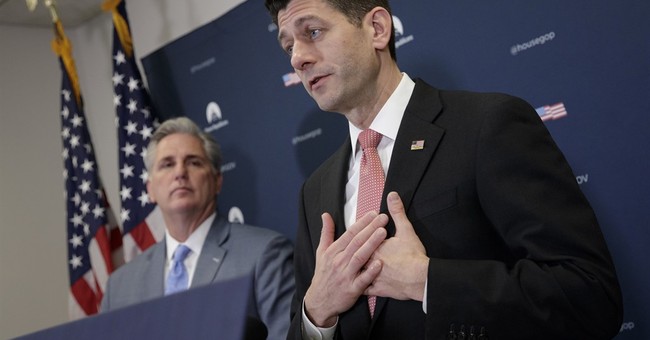 Of all the muscles in the human body, none are perhaps more toned and strengthened than those in the index finger of moderate Republicans in Congress; particularly following the defeat of their high profile, “too-important-too-fail” health care legislation. There certainly was no shortage of finger wagging and pointing this week, following Speaker Paul Ryan’s decision to pull the GOP’s controversial “replacement” of ObamaCare due to lack of support within the ranks.

Supporters of the American Health Care Act, including the White House which demanded its passage “or else,” blamed everybody -- from the House Freedom Caucus to the Cato Institute to Democrats -- for its failure; except, of course, the moderates who cobbled together the faux repeal in the first place.

However, another – and far more accurate – way to look at defeating the AHCA by Republicans would be to say, “It’s about time!”

In national politics, on key issues especially, you rarely if ever, get more than one chance to pass something meaningful. If you allow the moderates/Establishment to convince you that you cannot let “the perfect to be enemy to the good” (a phrase I grew to loathe during my time in Congress after hearing it so many times from leadership), seldom does another opportunity come around; much less one to actually “get it right.”

Ever since George H. W. Bush pressed House Republicans to join in breaking his infamous “read my lips” no-tax-increase pledge, these have been the same empty promises force-fed to conservatives by moderates in Congress to goad them into supporting dreadful bills. And, almost always, conservatives are left holding the bag.

So, when it came time to line-up support on the AHCA, despite its manifest shortcomings as genuine reform, finally enough was enough for conservatives.  Was this not the precise opportunity to “get it right” that was promised to them for years when it came to replacing ObamaCare with the conservative, free market reforms Republicans have claimed for decades are the key to fixing healthcare in America? Members of the House Freedom Caucus, Cato Institute, Freedom Works, Club for Growth and others were asking nothing more than for the GOP to uphold its end of the bargain, and not squander the opportunity with another permanent “temporary fix.”

Yes, passing genuine repeal of ObamaCare and replacing it with a free market based alternative would have been more difficult and time-consuming than what was proposed by Ryan and his team. It would have taken additional weeks, if not months, to draft, debate, and convince both their colleagues in the Congress and the public that government does not  have a magic wand, and should instead give the private sector broader latitude to come up with solutions for efficiency and effectiveness. Yet, this is a fundamental duty of Republicans in Congress – to get it right – rather than taking short cuts, that while perhaps making things a little better is far from the true path needed to make things much better.

In this respect, conservatives were saying “No” because they wanted to stand up for what is right, rather than saying “Yes” just because House moderates wanted reelection material, or because an optics-obsessed White House could check off another campaign promise, regardless of what the end-product looked like. They were finally demonstrating what conservative voters have long wanted from Republicans in Congress – a willingness to stay true to the principles of the Party and the Constitution, even if it means going against Party leaders.

Standing up for these principles is not being anti-Republican, or not “living in the real world” as White House Chief Strategist Steve Bannon suggests; it is simply refusing to be yet another rubber-stamp Congress similar to that which gave us No Child Left Behind, the USA PATRIOT Act, and the massively expensive prescription drug bill – just because a Republican president wanted such legislation passed.

In doing what they did last week, the conservatives sent a message to the Establishment that principles do actually mean something; and that at least a significant number of Republican members will stand firm in that regard.

The lack of “loyalty” by the Freedom Caucus that the President decried immediately following Ryan’s pulling the vote last Friday was in fact a welcome exhibition of “loyalty” to true Republican principles, and to the Constitution-based responsibility of the House of Representatives that is independent of the presidency even if the occupant of that office happens to be of the same political Party as the majority.

Hopefully, congressional leaders and the White House will come to understand this, and see it as an opportunity to begin actually reining in government rather than expanding it.  One can at least hope.