Bob Barr
|
Posted: Jun 01, 2016 12:01 AM
Share   Tweet
The opinions expressed by columnists are their own and do not necessarily represent the views of Townhall.com. 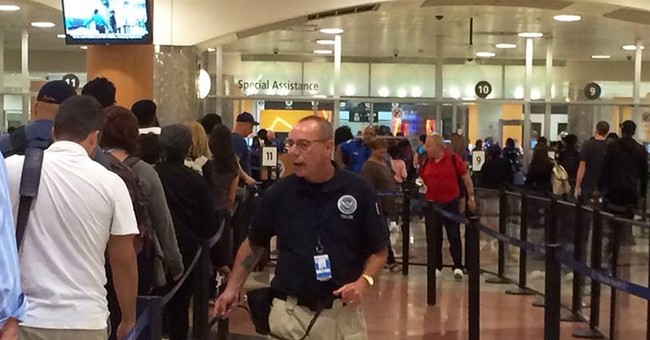 “TSA recommends passengers show up at least 48-hours early for flights,” writes Agent Smith of @TSAgov, a parody Twitter account lampooning the beleaguered Transportation Security Administration. However, when taking a look at the state of security checkpoints at airports across the nation -- where recently wait times have stretched for hours, causing tens of thousands of passengers to miss flights -- it is hard to see where parody ends, and actual security begins.

It is not as if the TSA has not been afforded ample opportunity to become the security clearinghouse for airports it was designed to be when Congress created the agency following the 9/11 terror attacks; but, 15-years and close to $100 billion dollars later, the agency just cannot get it right.

Frustration with the TSA, coming not just from passengers but from airline operators as well, has risen to an angry boil in the last few weeks as wait times for security have increased at some major airports well beyond the “arrive two hours early” recommendation. American Airlines announced last month that 70,000 of its passengers, and 40,000 checked bags, did not make it on to scheduled flights due to the TSA. “We have never seen TSA wait times that affect airlines and passengers throughout the United States like we have seen in recent months,” an executive from the airline told Congress in her testimony focusing on current travel woes.

The TSA’s response? Blame passengers for carrying more bags and, as expected, ask for more money.

It may be true that external factors such as increased airline travel and more passengers turning to carry-on bags to avoid checked bag fees have put additional strains on TSA resources; but the agency tasked with the very specific job of transportation security seems utterly incapable of adapting to even the simplest (and most obvious) security variables it can and should expect in the course of executing its duties. Much of this problem stems from the mismanagement of the agency that has been festering for years; an issue only recently investigated by the House Oversight and Government Reform Committee. In talking to numerous employees and officials, the House committee discovered an environment in which whistleblowers lived in fear of retaliation, and key leadership positions were filled with wholly unqualified individuals.

The House committee also noted the agency’s propensity for wasting taxpayer money on boondoggle projects; highlighting that it took nearly $50,000 to create a “randomizer” app for selecting passengers consisting of nothing more than a left or right arrow. Unfortunately, in TSA-world, this is on the low end of waste and abuse of the taxpayer. For example, the TSA spent more than $30-million on security scanners that were eventually removed from airports due to privacy concerns over the revealing images they produced. Furthermore, as I wrote last year, the TSA has dumped nearly a billion dollars into its Screening of Passengers by Observation Techniques (SPOT) program, which performs risk assessment on passengers using a “scorecard” of warnings signs such as “body odor” and “exaggerated yawning” – in spite of the Government Accountability Office recommending the program be defunded due to its absurdly unreliable methods and dubious results.

Yet, as Department of Homeland Security Secretary Jeh Johnson tells us, we should be giving the TSA more money if we want them to do what taxpayers have been paying billions for already. Actually, the opposite should happen.

Congress should abolish the agency and mandate that airports and airlines assume responsibility for security. The role of the federal government should be to set the security criteria to be met by commercial aviation airports; then have the airlines implement the standards; and finally ensure through reporting and monitoring that proper security checks are maintained and updated as needed to meet changed circumstances. Privatizing commercial air travel security will give the airlines and airports the flexibility and means to address changes to the security environment not possible when working under federal bureaucrats whose “solution” to every criticism is “give us more money.”

Only in the federal government is more funding and more power the answer to incompetence and mismanagement. Congress should refuse to play any further role in this security theater, and do what they should have done years ago – privatize the TSA.