Bob Barr
|
Posted: Feb 17, 2016 12:01 AM
Share   Tweet
The opinions expressed by columnists are their own and do not necessarily represent the views of Townhall.com. 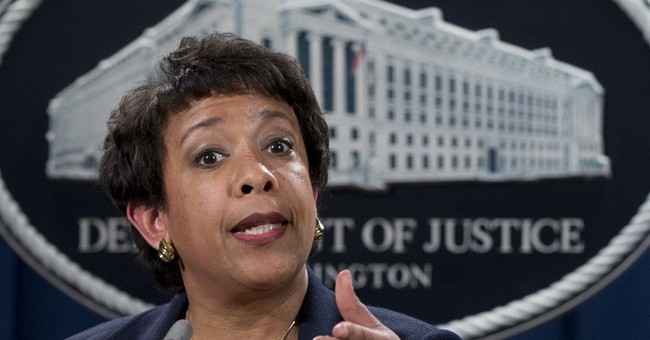 From the Ferguson Police Department’s first public statement about the police-involved shooting of Michael Brown in August 2014, the town of Ferguson, Missouri was doomed. Like Newton’s First Law of Motion, the shooting started a cascading series of events that continues a year and a half later.  The rounds of looting, rioting, protesting and media circuses, has morphed into a massive lawsuit filed against the small suburban town by the U.S. Department of Justice.

If one accepts the allegations in Attorney General Loretta Lynch’s lawsuit, Ferguson is nothing but a teeming hotbed of racial hatred and official incompetence; the only solution for which is federal control.  In the government’s eyes, the town has no regard whatsoever for the Constitution and laws of this country, and has engaged in widespread and systemic violation of civil rights.  Tough stuff, indeed; but the Department’s approach reflects more an example of how to address a manageable problem with a wrecking ball than a tool kit.

Tragic as it was, there was nothing so remarkable or unique about the shooting of Brown that justifies this action by the Justice Department. The aggressive and authoritarian manner in which the Department has hounded the Ferguson Police Department over the past 18-months is far different from the way in which previous presidents and federal prosecutors, including myself, dealt with incidents in which law enforcement officers or departments violated individuals’ civil rights. By vigorously prosecuting such cases individually as warranted, prosecutors and the Department of Justice itself were able to hold the officer or officers accountable; and without attacking entire departments or needlessly imposing federal government control over local government responsibilities.

For U.S. Attorney General Loretta Lynch’s Department of Justice, however, control – not justice – is the real goal; and Ferguson has become ground zero for its crusade to scrutinize and punish law enforcement officers and departments for perceived racial injustices. In effect, the Department is seeking to implement its own form of “Common Core” for Law Enforcement, wherein local control is stripped away in favor of federal policing standards that have been packaged into what may be “politically correct” on the surface, but have little actual impact on the troubling issues that linger in the criminal justice system.

To an Administration obsessed with “optics” more than genuine reform, this façade may fulfill its objectives. However, for those who genuinely care about individual liberty and constitutional conduct within the justice system, they actually are poisoning public debate about criminal justice reform and exacerbating the already strained tensions between citizens, police and the federal government.

For the first time in decades, for example, we have an opportunity to achieve substantial and lasting criminal justice reform through federal legislation. Reforms that would help restore civil liberties to the criminal prosecution process while providing much-needed relief to an overcrowded and costly prison system, currently are pending in the Congress. These measures enjoy strong bipartisan support, including among policy organizations ranging from the leftist Center for American Progress to conservative FreedomWorks. It is one of those rare scenarios in which Democrats, Republicans and the President are in at least partial agreement on an issue that actually strengthens civil liberties.

Unfortunately, without Administration support and in the absence of public demand for passing these reforms, the pending bills have languished without votes to send them to the President for signature.  Ironically, the Justice Department’s highly visible crusade against Ferguson (and other police departments) is much to blame for this failure.

By antagonizing police departments and politicizing police-involved shootings of minorities, the Obama Administration has turned the conversation about “justice reform” into a false dichotomy between support of police on the one hand, or social justice groups like “Black Lives Matter” on the other. In such a polarized environment, real efforts at reform, such as those pending in Congress, are given nary a thought, much less active support from those members of Congress who can help win their passage. Meanwhile, individual Democrats and Republicans who oppose such efforts are undermining the bills before they ever reach the floor.

The clock is ticking on criminal justice reform, and an opportunity such as this for genuine, lasting reform is truly once-in-a-lifetime. If Obama cares to salvage at least a sliver of a notable legacy, he should abandon his shortsighted and misguided drive to place local police departments under Uncle Sam’s thumb, and help shift the public conversation back to substantive reforms that really matter.