Taking Action Now on Infrastructure Can Save Lives in the Future

Bill Walton
|
Posted: May 02, 2018 4:00 PM
Share   Tweet
The opinions expressed by columnists are their own and do not necessarily represent the views of Townhall.com. 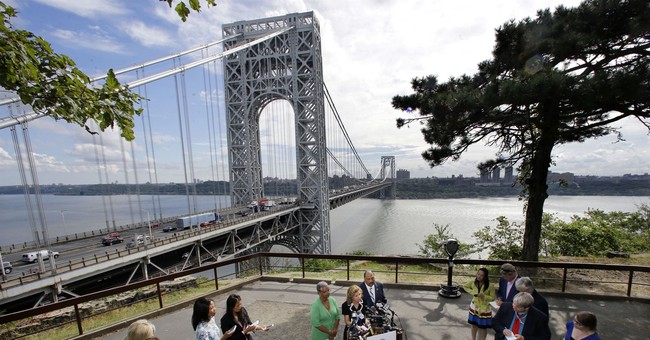 One doesn’t need to travel ahead in time to know that big trouble awaits every American who relies on our nation’s crumbling infrastructure. The chances of bridges collapsing, trains jumping tracks, and tunnels and dams failing increase every year. A 2017 report card issued by the American Society of Civil Engineers assigned America’s deteriorating infrastructure a very disappointing but predictable grade of “D+.”

In Mississippi, more than 100 bridges have been closed due to safety concerns. Huge chunks of concrete have just recently fallen from Boston’s Albany Street bridge onto commuter rail tracks. Chicago is struggling to find ways to repair more than 135 miles of city streets and overhaul an aging mass transit system that regularly experiences breakdowns and disruptions. The collapse of the I-35 bridge in Minnesota during rush-hour traffic took 13 lives a decade ago.

The president is a strong advocate of a plan to work with both political parties to rebuild the nation’s dilapidated infrastructure. But before any substantive improvement can be made to our roads, bridges, tunnels or energy industry, Congress has to simplify and streamline the bureaucratic mess which was created by the National Environmental Policy Act (NEPA).

Predating the Environmental Protection Agency, NEPA was created as a vehicle to assess the environmental impacts of public works projects. Congress wanted to make sure that all federal agencies examine and weigh the potential environmental impact of their actions. This well-intended idea has grown over the years into a bureaucratic nightmare which slows or halts new construction/repair projects with needless government red tape and endless delays.

All too typically, the process will look like this: An executive branch agency will review a proposed public works project, assessing its potential environmental impact as well as economic, cultural, historical, aesthetic and other implications. Thousands of report pages later (and only if all goes well), one government agency will sign off on a permit. After that, a series of other agencies have to weigh in with redundant and needless reviews. If the project ever successfully clears all the government agency hurdles, it likely faces numerous court challenges, which can drag on for many years – in some cases, a decade.

Postponing the start of a construction project by six years typically doubles the cost. Such delays to public projects alone have added $3.7 trillion in costs borne by American taxpayers, according to a Common Good analysis, which calculated how inefficiencies and avoidable pollution added to the tally. It’s sheer madness for our policymakers to accept a mandate that needlessly adds so many years and so much money for life-saving public works projects that we need by yesterday.

President Trump is well aware of the permitting quagmire and has offered a solution. The president’s “One Federal Decision” policy reforms the permitting review process by assigning a single, lead agency to review infrastructure projects, with the permitting reviews to be finalized within 90 days. The follow-up memorandum of understanding signed by the heads of 12 agencies in April directs that reviews be conducted concurrently. The MOU reads like a breath of fresh air, incorporating terms detested by bureaucrats, including “predictable, transparent and timely” and “standard operating procedures.” The president also wants to limit the amount of time construction projects can be delayed by legal challenges and appeals.

Still, more work needs to be done to slay the multi-headed hydra that is NEPA. While executive action is helpful, such reforms lie at the mercy of the next pen-wielder to occupy the Oval Office. Congress needs to act to codify into law this and other reforms dismantling the failed NEPA approach. Considering the extra trillions of dollars NEPA shamefully wastes, Congress should not consider a future spending bill without permitting reform in place.

As early as next year, a deeper harbor, thanks to the Savannah Harbor Expansion Project, will mean potentially thousands of new jobs in Georgia and throughout the nation. But imagine what it might have meant to people struggling through the recession if the project had been completed a decade ago. Congress can’t travel back through time to fix that snafu, but our lawmakers can work together now to pass permitting reforms that will allow our economy to prosper.