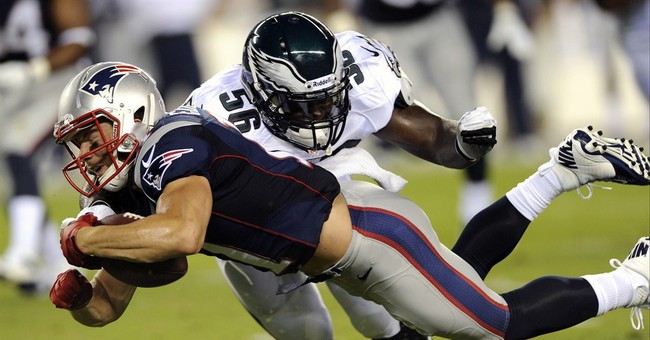 Thank goodness it’s that time of the year again — a touch of autumn is in the air, training camps are going full force, enthusiasm from both the players and the fans has reached a fevered pitch, and we’re all waiting with great anticipation for another exciting season of NFL football.  Most people might think that my zest for football revolves round the fact that I played the game in college, and that I love the idea of thousands of pounds of highly talented humanity smashing into each other in order to score a touchdown.  And those people would be right.  However, since I’ve grown older and more experienced, I’ve come to regard the NFL season as the true and more honest alternative to the Dow Jones, the S&P 500, and the NASDAQ.

Consider that an investment is well-thought-out, properly researched, and thoroughly analyzed. Yet, in their current fashion, the aforementioned major U.S. stock indices are merely a place to make a bet — not make an investment.  And if a wager is to be made, some degree of truth needs to be apparent.  Imagine, if you will, that renowned “corporate raider” Carl Icahn had just announced that my beloved Buffalo Bills are undervalued, and that Icahn was thinking about taking an ownership position in the team, just like he recently did with Apple, Inc. stock.  Would that increase the chances of the Buffalo Bills winning their season opener?  I think not.  Yet, for Apple, that very same announcement was good for a significant one-day increase in their stock price.

The government recently announced a new GDP calculation method; it’s designed to make a faltering economy look healthier.  Undoubtedly, this new approach to GDP computation which includes the addition of unpaid pensions along with research and development, gave a big boost to a tentative stock market.  Using that same thought process, what if the Arizona Cardinals announced a brand new way to diagram offensive and defensive plays — unique schemes that appeared to be unbeatable on the chalkboard.  Would that guarantee a win for the team?  Hmmm, I doubt it.

Unfortunately, the financial markets abound in the government’s creation of facts and figures, all designed to make everyone feel good at that particular moment in time, while quite possibly providing an opportune moment to place a bet.  Nevertheless, if I want to make a wager, I’ll be much more comfortable knowing that Tom Brady is healthy, Peyton Manning can still throw the deep post, and the legs of Aaron Rodgers are as strong as ever.  Unlike a carefully contrived monthly employment report which excludes most people who are out of the workforce, or a manufactured birth/death jobs ratio drawn up by an unidentified governmental bureaucrat, the current NFL injury report is vital information that’s definitely worth knowing.