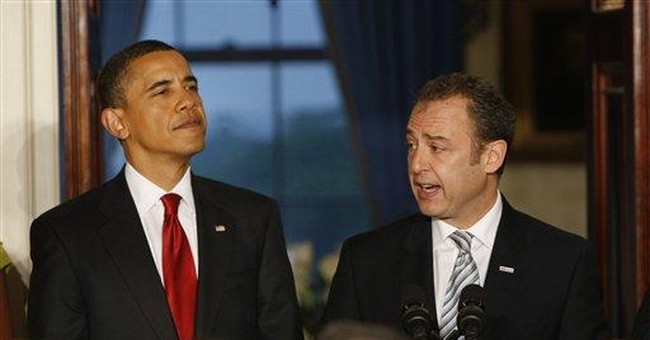 When it comes to fighting for free markets and railing against government intervention in the economy, no one on TV does it better or more passionately than economist Larry Kudlow of CNBC. The anchor of "The Kudlow Report (7-8 p.m. EST) and co-anchor of "The Call," (11-12 p.m. EST) is a former Reagan administration economics adviser and now CEO of Kudlow & Co., an economic research firm. A nationally syndicated columnist, he also has his own blog, Kudlow's Money Politic$ (kudlowsmoneypolitics.blogspot.com) and is a regular contributor to National Review and National Review Online. On Friday, at the end of a week in which we saw Chrysler start down the road to bankruptcy and learned that the Gross Domestic Product had fallen 6 percent over the last six months, I called Kudlow at his office in New York to see if he was still upbeat about the chances for a short-term economic recovery.

Q: You specialize in finding signs of recovery -- "mustard seeds," as you call them. Did the 6 percent GDP percent drop or any of the other events of this week dent your overall optimism?

A: No. There are cross currents. The best part of the story is the economic statistics coming out of Washington are looking better. You're right about GDP, but inside the report, consumer spending was actually stronger - up 2 percent - and inventories really crashed - over a $100 billion decline. So it looks like the consumer is stabilizing or even improving, because gasoline prices are so low it's boosting consumer incomes and boosting purchasing power. Even though the unemployment rate is going up, still over 90 percent are still working. I think that was a big plus.

You've got some other reports.. Business orders are rising. Manufacturing is improving. Some of the regional manufacturing reports from the Chicago Fed and the Richmond Fed showed strong improvement. It's all pretty good stuff, actually. I think it's safe to say that the worst is over. There's another report I want to cite: We've had now three or four weeks of declining jobless claims. That's a leading indicator of the economy. For the first time it's starting to roll over and go back down, and that's very important.

A: Yeah, I think so. I think the stock market is recovering. You're up about 30 percent from early March. I don't know whether it gets to 10,000 or not, but 10,000 is a good benchmark. I think that's part of the recovery story.

I think behind that the key factors -- the key "mustard seeds" for me -- have always been this six-month, seven-month narrative of mine: The Fed is pumping in new money like crazy. Energy prices have just crashed from a year ago or last summer - most importantly, gasoline prices. That's like a tax cut for the economy.

So easy money and lower gasoline prices and, more recently, lower mortgage rates, are all very helpful. That's like another tax cut. From energy and mortgage rates alone, some people have guestimated a $500 billion tax-cut effect. And the Fed has created about $650 billion of new M-2 (the amount of money in circulation) and the Fed's balance sheet - which is the ultimate measure - has risen by over $1 trillion. That's a lot of money, my friend.

I don't think much of Obama's so-called stimulus plan. I don't think government spending stimulates the economy. There are some tax credits in there that probably will help in the short run. They're not real tax cuts because they don't change marginal rates, but there is a cash effect that will help low-end consumers. But it's a very weak impacter.

But I think easy money from the Fed, lower gasoline prices and lower mortgage rates set the stage for recovery. I think GDP will be positive in the third and fourth quarters. I think they are going to be stronger than people think. I don't see this as a long-run story. It's just a little cyclical rebound.

Q: In the long run, shouldn't we be terrified by the prospect - or the near certainty - of serious inflation because of all that money being pumped into the economy?

A: No doubt about it. It's down the road - you're talking about maybe two years. My view is that we'll cross that bridge when we get to it. Ultimately, you may be right. There's no question that the longer-run threat of inflation is something to think about. In terms of what we saw this week, look: President Obama is waging war on investors. He's waging war against businesses. He's waging war against bondholders. These are very bad things.

Obama's team is riding roughshod over bond contracts, over any private-property contracts. They are riding roughshod over shareholders. They have a complete disregard for investors, and this is very bad. It is going to create a reluctance to invest. It drains the animal spirits. It hurts risk-taking. These are very bad things.

Q: You are very critical of the president 's overall direction, right?

A: Really, the broad-based issue here, besides waging war against investors, is an unprecedented effort to control the economy. It's industrial planning. It's intervention on a grand scale. It's a lurch to the left. It's really an attempt to reverse Ronald Reagan's deregulation and low-tax policies that lasted for close to 30 years. He's trying to change the Reagan agenda into a very substantial government regulation of business and the economy.

Secondly, the tax hikes on investors and upper-end individuals and overseas business profits is a bad idea, in my opinion; it reduces incentives to work and invest. But also I think you are going to see many more tax-hike proposals from Team Obama. I wouldn't be at all surprised before the year is out if we didn't see a proposal for a value-added tax, because he's running just gigantic spending and borrowing plans.

I looked at the Congressional Budget Office numbers and really I'm not usually a deficit hawk because I think you can grow your way out of it, particularly if you are reducing tax rates. But I think these are numbers that are beyond the pale. You are looking at an average deficit that is about 6 to 7 percent of GDP in the next 10 years -- each and every year. In the immediate year it's going to be way above that. It's going to be 12 or 13 percent. Then it comes down to 6 or 7 percent; that's a bad number.

And the debt burden grows to 80 percent of GDP, according to the CBO, in the next five to 10 years. I think that -- plus the effort to control business and the breaking up of these bond contracts, which you see with the fight over General Motors and Chrysler -- are anti-growth. Every one of them is anti-market. These things are really going depress our long-run potential to grow. That's what really concerns me. It's my biggest issue.

Q: Obama has such an array of spending plans. Is there any single one that worries you?

A: The single biggest thing I worry about is cap-and-trade, because that would be massive regulation of businesses and massive tax increases. The cost structure of business in the whole country will go up by somewhere between 30 and 40 percent, according to estimates. It will slow down the economy and will really hurt corporate profits and will really damage consumer spending.

Q: If you had had a chance this week to ask President Obama a really tough, scolding, loaded question at his press conference about one of his economic policies, what would you have asked him?

Q: You were very critical of President Obama's handling of the Chrysler bankruptcy deal - you called it "left-wing demagoguery."

A: Yeah. His attack on investors and bondholders is shameful, absolutely shameful. He says he wants people to save more, and yet he doesn't want them to save through investment. I know many of these bondholders personally. I talk to them. These guys represent teachers and firemen and police and widows - the whole nine yards. Their job is to invest their clients' money. Why is that bad?

Q: On your show, you are an unabashed cheerleader for capitalism, but there seem to be so few people like you in the media, in business -- even on CNBC, which isn't crawling with leftists. But they are not too many Larry Kudlows, either.

A: Yeah, we cover the gamut. But I continue to argue that economic freedom is vital, and that free market capitalism -- with all of its faults and the possibilities that we do have recessions from time to time -- is nonetheless the most efficient growth engine out there. I think that Obama is moving us away from free markets and towards government controls. That's the bottom line, and I don't like it one bit. And I think there's a limit to the stock market rally. That's the key. I usually argue for a long-run view, but right now I think investors have to be more activist in managing their portfolios because I don't think you can just invest for the long run. You have to be rather cautious.

Q: Republicans seem pretty stupefied. They have no leader. They seem afraid to stick up for the market in a lot of ways. Do you see any "mustard seeds" in the future of the GOP?

A: I think the party is really dead. I am sure that there are "mustard seeds," in the sense that you can look at individuals who have some good ideas about trying to roll back Obama's regulations - in the Senate people like DeMint, Coburn, Kyl. Over on the House side, you've got some terrific young people - Paul Ryan or Jeff Hensarling. But they are just individual House members and senators. You don't have any national figures -- perhaps Mitt Romney. Ok, he's a classy guy and perhaps Mitt is destined for greater things. But at the moment, I wouldn't say he is a force.

I actually take the view that the most important Republican spokesman right now is Dick Cheney. An odd view, perhaps, but I think that what Cheney did on the CIA interrogation issue was very interesting, when he pushed back and said, "A), releasing these memos is a terrible idea; and B), if you are going to go there, let's release the good information that helped keep us safe." He really rattled the Obama White House by doing that because of his own force and his intellect. I think that on economic policy we are going to see Dick push back also.

Q: And Cheney would get the attention from the media?

A: Exactly. Exactly. So therefore I am quite interested in what he is intending to do.

Q: Is there anything that can happen that would turn you into a pessimist - a doom-and-gloomer -- when it comes to the fate of free market capitalism?

Obama's approval ratings are good but they are not great. They are about in line with many prior presidents. He's more popular than his policies are. I think if Republicans mount a good campaign next year they'll hopefully pick up a number of seats and slow this thing down. But right now we are moving in the wrong direction. It's that simple. We will get a cyclical economic rebound but I don't think it is going to be anything to write home about.