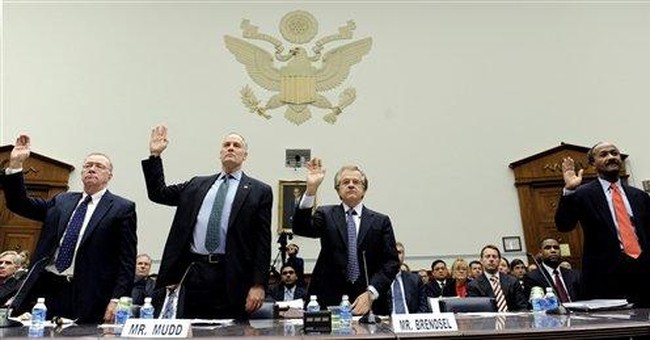 The crash of the economy and the rise of Barack Obama were the big stories of the last year, and both were hot topics in interviews with pundits, authors, think tank experts and newsmakers. Here are some of the interesting, smart or worrisome quotes from 2008:

"The government has brought on the housing problem, partly by these very low interest rates, which encouraged many people to go way out on a limb. They've brought it on by highly restrictive building policies, which have caused housing prices to skyrocket artificially. And they've brought it on by the Community Reinvestment Act, which presumes that politicians are better able to tell investors where to put their money than the investors themselves are. When you put all that together, you get something like what you have."

"What we have to recognize is that in 1995, the homeownership rate was a little bit below 65 percent. That's essentially where it had been in the 30 years up to that point. In 2004, thanks to the subprime market, it reached 69 percent, and that was a homeownership rate that was sustainable only through fraud and risk and irresponsible lending activities. Now that we've returned to normal credit standards ... we're going to be drifting back to the 64 percent or 65 percent homeownership rate. That means that over the next couple of years, somewhere between four and five million people who are now homeowners are going to be 'un-homeowners.'"

"The broader issue -- the long-term change in lending standards, where it might be harder to borrow, where you might have to put more money down, etc. -- is probably going to last a long time. I don't know how long, but I can tell you that the guidance I get from CEOs in the housing industry and the banking industry is that it is likely at least to the end of next year and probably well into 2010."

"They are invested almost entirely in mortgages. They never had very much capital because, as I said, they have been very powerful and they are able to influence Congress. So that what little regulation they had did not require them to hold much in the way of capital. So, if you have a very small amount of capital, and you suffer some major losses, which is happening because, as you know, the housing market is not doing particularly well and people are defaulting on their mortgages, Fannie Mae and Freddie Mac are suffering losses."

Whose crisis is it?

"The fact that the crisis was unaddressed is squarely the responsibility of the liberal Democrats. They fought any reform at all. That's clearly documented. So that part of the economic failure is clearly not Bush's fault. As for the liquidity crisis, I think (Federal Reserve Chairman) Ben Bernanke has not been a very successful Fed chief. I think he misread the economy over the past year, and I think they needed to put a lot more liquidity into the economy."

"One is the free fall of the dollar; that's got to be stopped; that cannot go on. Two is stopping the panic by telling banks and lenders and the accounting industry and the regulatory authorities don't take write-downs on subprimes and some of these other exotic instruments until you actually know what the losses are. In other words, if somebody defaults on a mortgage, you write the mortgage down. But you don't try to guess how much you are going to write off because you don't know."

Will the 'bailout' work?

"No way. I think that it's just going to bring more problems. You can't stop a problem of too much spending and too much deficits and too much monetary inflation with more of it. So I'm positively opposed to the bailout and believe it will just delay the correction that is required. We need to correct the imbalances, and if you interfere, you just delay it and make it more difficult and make the problems worse for ourselves."

Who will pay the tab?

"Your children and mine. Not in the form of debt, which is the standard answer, although they'll pay for that too. But the real cost is, to me, that we will lose the goose that lays the golden eggs -- which is our unbelievably flexible and powerful financial system. We have -- until recently -- had the best capital market in the world. We look across both the stock market down to venture capital to angel investing -- the opportunity to find financing for great ideas was really unparalleled in the United States. That right now is at a standstill. If it does not come back, we will all be poorer for it."

Why you, Bob Barr?

"Sen. Obama's claims to stand for change are very well known. What's less known is his record and the way that in Chicago he's worked against bipartisan reform pretty much anytime he's had an opportunity to do something either for or against it. In Chicago, there is a political tension between reform Democrats and machine Democrats. Sen. Obama has always aligned with the machine Democrats. ... The pattern throughout his life is unmistakable: Sen. Obama's pattern of working against bipartisan reform and accommodating himself to whatever political culture of corruption he finds himself in in any given environment -- it's a very consistent and unmistakable record. It carries through Chicago, Springfield and Washington, as well."

Author of "The Case Against Barack Obama" (Aug. 31)

"What we discovered, in two different places -- first in Hawaii, where he went to high school, and in Chicago, where he started his political career -- is that he is right in the middle of communist networks. In Hawaii, he was mentored by a member of the Communist Party by the name of Frank Marshall Davis. In Chicago, his career was launched and he was close friends with a number of communists and socialists."

"No. If the Democrats get elected, absolutely not. And what I now see, they are all about more government -- more government funding, more government control. I teach at the Harvard Business School. In a class of 100 students, I have 20 fully trained doctors. I say, 'What the heck are you doing here? Why aren't you practicing medicine?' They say, 'I cannot practice medicine anymore.' That's a tragedy and that tragedy will become much worse under a Democratic administration."

The "godmother" of consumer-driven health care

"The court -- for the first time in 70 years -- has given some meaning to the Second Amendment, a provision that was ratified in 1791, and which meant pretty much what the Framers intended it to mean until U.S. v. Miller, the case in 1939, which was misinterpreted by courts across the country to suggest that you could only use guns in the context of militia service. The Supreme Court finally put that to rest."

"For most transit agencies in the United States, if they were to write a mission statement that is reflective of what they do, they would indicate that they exist for the purpose of serving their employees and vendors."

"The United States is the outlier -- it's the place that is strange. All of the Western European countries and Canada have school choice. They don't always call it vouchers but they have it. If you lived in Winnipeg you could go to any private, public or parochial school and the province pays. They have choice. They have choice in Sweden -- socialist Sweden has choice: vouchers for going to religious schools, private schools, public schools. Only the United States has this system where all the money just goes to the government-owned schools. It's unusual. It's weird. It's not sustainable in the long run. Eventually choice will catch on."