Bill Murchison
|
Posted: Apr 10, 2018 12:01 AM
Share   Tweet
The opinions expressed by columnists are their own and do not necessarily represent the views of Townhall.com. 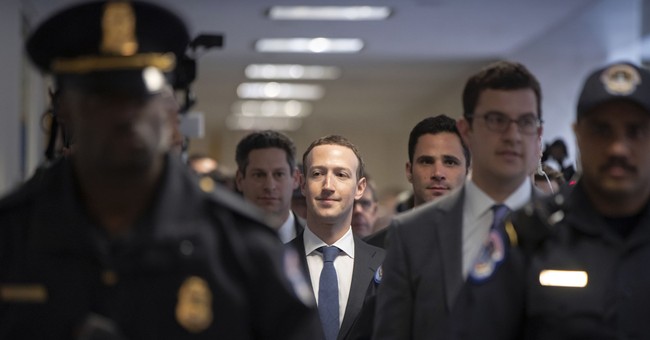 The point on which to keep the eye is the revolutionary context wherein Facebook, using previously unimaginable technology, operates to the benefit or detriment of its billions of users. From whom -- I make bold to deflect the narrative flow -- I am deliberately absent.

When I professed university-level journalism a dozen years ago, one of my ace students set up a Facebook account in my name, so that I might experience the experience. Which I never got around to doing, thanks anyway. If Cambridge Analytics managed to scoop up my Facebook data, layers of dust must have risen in the air. Though what do I know about all that -- member, as I am, of the typewriter generation?

What I think I understand a little bit is the revolutionary nature of what the world is going through with communications -- all the sortings-out and sortings-through that make it impossible to guess how X and Y will be talking to each other inside of, say, a decade.

The outrage over Facebook -- Zuck the Prophet becoming Zuckerberg the Enabler of Snoops and Spies -- shouldn't surprise anyone. It happens this way in revolutions. Bright hopes fade faster than dark doubts. We now know things about Facebook we hadn't suspected: to wit, users throw away their personal privacy.

Not that privacy has ever been, or ever could be, absolute. A team of hard-digging reporters always has had the ability to unearth the goods on anyone. The digging is just easier now with the tools at our disposal; likewise the job has become almost unimaginably complex.

Anybody can get in on the act through tweets, podcasts or Lord knows what all. There used to be gatekeepers of information, called editors. The editors are in disarray, their way of life endangered by the emergence of a news marketplace filled with as many rumors and lies and libels as there exist people with the technological skills to spread them. Pandora's box is wide open, journalistically speaking. We couldn't go back to, say, 1960 if we wanted to.

Two points seem worthy of attention in this context.

The first is that free, unregulated communication is better than the unfree, regulated kind. This is partly because, as Juvenal inquired a couple of thousand years ago, who is going to watch the watchmen themselves? It is partly, also, because the power of truth remains, as ever, the sovereign remedy against falsehood. The great John Milton, as I used to assure my journalism students, had it right when he argued, in the "Areopagitica," against the licensing of speech. "And though all the winds of doctrine were let loose to play upon the earth," he wrote, "so truth be in the field, we do injuriously by licensing and prohibiting to misdoubt her strength. Let her and falsehood grapple; who ever knew truth put to the worse, in a free and open encounter?"

Free and open encounters, to be sure, require some exertion, some sacrifice even. We have to put on our work clothes, and maybe miss things that are more fun -- like (so I'm told) checking our Facebook pages.

Herewith my second point. Wouldn't it be good for us as a culture, as a people, as a nation, to put some effort into a job too long neglected: the restoration of the idea that truth actually exists; that it's not just a matter of personal opinion; that some things, even in the 21st century, are better than other things -- more deserving of honor and loyalty?

Truth, in other words, isn't just what some troll on Facebook says it is. There was truth before Facebook made its initial stock offering; there was truth even before Mark Zuckerberg's future parents laid eyes on each other.

A great to-do the mighty Zuck, plucking at the unfamiliar encumbrance of a necktie, is sure to make in Washington, D.C. I merely hope the furor doesn't get in the way of larger realities -- those sure to be around when the Facebook page has gone the way of the buggy whip.