A Game for 2 Players

Bill Murchison
|
Posted: Jul 04, 2017 12:01 AM
Share   Tweet
The opinions expressed by columnists are their own and do not necessarily represent the views of Townhall.com. 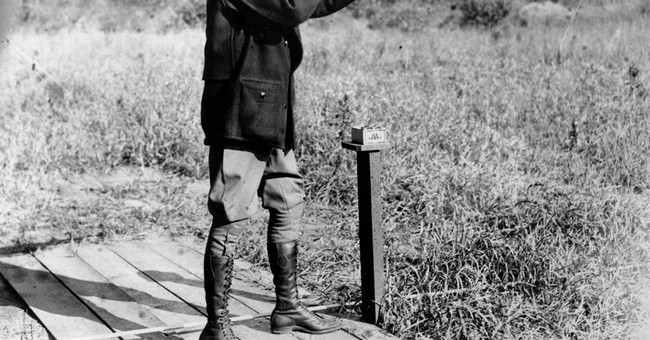 The word "unprecedented" keeps coming up when discussion turns to our president. He likes it that way: scandalizing the "fake press"; horrifying the high-minded among us (such as remain); giving vast swaths of political opinion, far from all of it "liberal," the swoons and the vapors.

Can you see Cal Coolidge ridiculing, say, Rudy Vallee or Walter Lippmann in the manner our president has adopted for the disposal (as he supposes) of Joe Scarborough and Mika Brzezinski?

Let me step backward a couple of paces. We require some perspective. Two points beg for airing, it seems to me.

The first, and lesser, point is the current variety and availability of communication techniques unknown in the Coolidge and, and for that matter, Clinton eras. In short, what you can do -- e.g. Tweet with ferocity and devotion -- you do. Doesn't everybody else involved in the great dog-fight of life?

Then we happen on the larger point. Should we be doing what we're able to do? Should I, America's president, be mixing it on Twitter with Mika and Joe?

No! Nicht! Non! Ixnay! That's the brief answer. I could go on for another 10,000 words.But let us see what gives in this crazy mixed-up culture of ours, which privileges forms of rudeness, crudeness and stupidity masquerading as "free expression." As if James Madison slyly contrived the First Amendment as a means of pulling down civilization. Hint: He didn't.

The point popular culture doesn't seem to get is that "free expression" isn't the answer to everything, or the solution to the quest for joy and jollity. We seem over the past half century or so, chiefly under the stresses and strains of the 1960s, to have acquired the view that if you feel left out by society or stripped of human necessities -- or agitated by your failures -- your entitlement is to rage, rant, kick over the furniture, shoot a cop, burn flags, whatever.

We had a lot of that stuff and nonsense in the '60s and then on into the '70s. Plenty caught on to the plan: Say obnoxious things; issue nonnegotiable demands; despise critics; claim to be right about everything under the sun. We never actually recovered, though many during the Reagan years thought we were on the way. The habit of free expression is a hard one to kick. You feel right and righteous at the same moment -- the way our president feels when he bashes his old pals "crazy Joe" and "dumb as a rock Mika" for reasons and provocations invisible to the ordinary onlooker.

The rules, so to speak, that came to dominate the '60s now dominate the twenty-tens, only more so. That's because they performed so beautifully for the rule-breakers. We came to understand that innocent bystanders had no choice but to take whatever was dished out to them by the outraged. Building on the intellectual achievements of the antiwar, anticop gang that emerged on campus in the mid-'60s and afterward, today's crop of the intellectually right and righteous are in full flower.

The problem is, when there aren't any rules, save those you assert on your own authority, this clears away the roadblocks and inhibitions for everyone else. Including Republican presidents: who, strange as it may seem, take as personal advantage that rule-lessness meant to advance the cause of non-Republicans. I think the operative expression used to be, "Two can play at this game" -- especially when one of the two has an entertainment background.

Respectful listening, human nature being what it is, has never been universal. But there used to be more of it than now. There used to be an obligation to speak good sense, if only so you might persuade those persuadable by good sense. I don't know whether the Supreme Court's grant of privilege to flag-burning as a form of free expression sealed the deal for childish indignation, or whether something else did. Here is our president all the same, letting us know he feels loosed from the norms and modes of the past -- and doesn't care, inasmuch as so few others seem to.

William Murchison's latest book is "The Cost of Liberty: The Life of John Dickinson."