Can We All Get Along?

Bill Murchison
|
Posted: Jun 27, 2017 12:01 AM
Share   Tweet
The opinions expressed by columnists are their own and do not necessarily represent the views of Townhall.com. 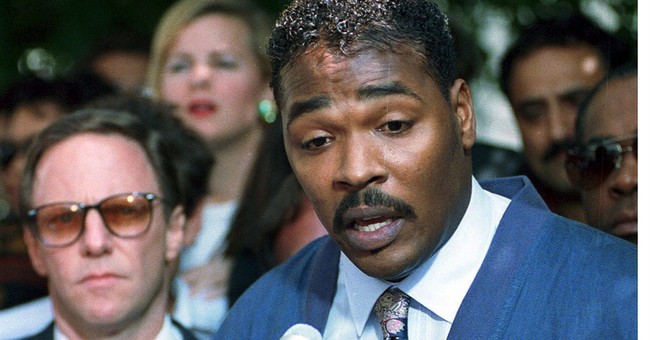 Nobody ever called the late Rodney King a model citizen of Los Angeles. But he gave the world what was likely the most plaintive, plangent query of our time. He wanted to know, in the aftermath of the LA burning, "Can we all get along?" Can we -- huh -- rather than wallop each other and turn the air blue with the making of strained political points?

The King question, in something of its original anguish, comes to mind as the U. S. Supreme Court sets up a constitutional affray over the right of a Colorado baker to decline -- or otherwise -- making a wedding cake for a same-sex couple.

The court takes up the matter of Masterpiece Cakeshop v. Colorado Civil Rights Commission this fall. A judicial rebuke to either side will scorch feelings and rouse unruly passions without settling the deep-down questions involved. A cake, a confection... a thing of sugar, butter and eggs! A cake as stand-in for the ways, increasingly various, in which we understand the relationship of the sexes! How, oh, how, did we ever get here?

Slowly and more than a bit accidentally, thanks to experiences of trying to get the hang of modern times, we got here. Over the last four decades, we, as a nation, have turned over to the political process of distinguishing truth and falsehood -- only to discover that the political process is mentally maimed when it comes to facing life's big questions.

Among the political decisions American politics made during the past decade, at the behest of those the media tend to call "activists," was the decision to activate a new way of understanding the marriage relationship. Whereas the old rule of one man, one woman per marriage seemed to gain general acceptance, accommodation of a new rule -- two men, two women, whenever desired -- became a political necessity for many.

You clearly could argue that The First Amendment allowed it. Something odd happened, nevertheless, in the course of the ensuing debate. Once the Supreme Court granted permission to understand marriage in the new terms, the rug was yanked out from beneath the opposite side.

Belief in the new order of things and disbelief in the old became public necessities, thanks to the way the debate wrapped up. These same actions of politics and vote-counting and public rule making were faced by Masterpiece Cakeshop Lakewood Colorado when its owner, Jack Phillips, declined to bake a cake for David Mullins and Charlie Craig.

Phillips hadn't gotten with the program! He insisted on the integrity of his religious convictions! What nerve! The political types in Colorado -- members of the state civil rights commission - glared balefully at this embodied threat to Order.

What was this business about his convictions, his beliefs? The commission wanted to know about their collective and their legally enforceable convictions. Because that is how politics works: Shut up, you loser! We won.

This, of course, is why civilized societies strive to keep the power politicians -- the do-it-my-way people -- away from transcendent things, where they can do harm. And now, when a baker gets rebuked for declining to bake, critics -- instead of reasoning with him or letting him go his way -- whop him upside the head, judicially speaking.

On to the next cycle of accusation and remonstrance: "Can we all get along?" Apparently not. The duty of the day -- the political duty -- is to punish critics and the dissimilarly minded. Some just plain don't want to "get along," lest amenability to free speech and spacious tolerance of others call into question their political sincerity.

What would it take to fix this troubled America of ours? About a million fewer politicians is a goal to get us started.