Bill Murchison
|
Posted: Sep 07, 2016 12:01 AM
Share   Tweet
The opinions expressed by columnists are their own and do not necessarily represent the views of Townhall.com. 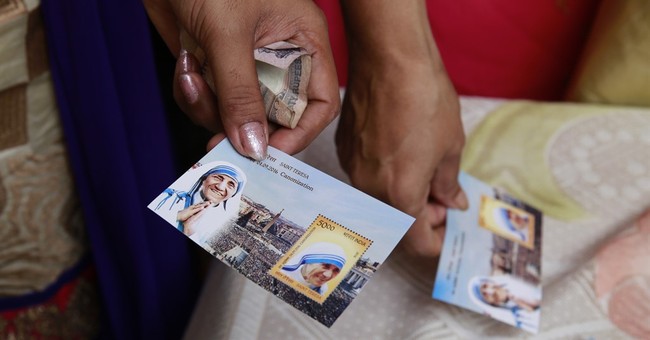 That St. Teresa of Kolkata (formerly Calcutta) could never, ever have qualified for the U.S. presidency is a blessing weighing nearly as heavily in her favor as does the plenitude of good works that led to her canonization.

The U.S. presidential campaign makes a fruitful backdrop against which to consider, shall we say, the Important Things in Life: which things are not always identical to those that presidential candidates and their fans represent routinely as urgent; a border wall, say, or a war on Wall Street.

St. -- Mother, as she had been -- Teresa saw the world in a wholly different way than do most people who want to be president. She saw it as God's world. Thus she saw the people in it as God's people. Her job perforce was not the formulation and implementation of a program; it was service to a program already in place -- a program of Christian reconciliation marked by humility and self-giving as opposed to pride and can-my-campaign-count-on-you-again?

"Blessed are the poor," and the poor in spirit, Christ had said. Which was hardly to say the desperately poor had no needs. Their needs were the business and preoccupation of Christ's servant Teresa, who founded the Missionaries of Charity in 1950, specifically to get down on hands and knees with the lowliest and filthiest. Of her work among the poor she said, "We give it and we do it to God, to Christ, and that's why we try to do it as beautifully as possible."

The human concerns that political people serve, such as peace and security, are by no means debased. But they are concerns on a different level than those to which St. Teresa joyfully ministered. Her "clients" were the truly trodden-upon -- without vote or voice. They included AIDS sufferers and unborn babies. Teresa never let her missionaries, or the world outside her mission, forget that God (who, after all, created life) wished life to be shared by all its recipients -- very much including the unwanted and inconvenient.

Her dismay over abortion, and the growing disposition of the political world to make it a personal choice, put her at odds -- moral odds, anyway -- with many who admired her more secular pastimes, such as medical care for those lacking it. It was not easy for the modern world, a world given to putting choice at the center of everything, even to acknowledge, far less exalt, Mother Teresa's premises and commitments.

Her deep Christian spirit disqualified her not just from the more apoplectic concerns of politics but for membership in any society of "well-doers." Her task was doing "something beautiful for God" -- which was the title of Malcolm Muggeridge's inspiring BBC documentary on her life and works, and of the book Muggeridge subsequently wrote on the same subject. In the quarter century since his death, this great British journalist-commentator has undeservedly slipped from memory. It is worth remembering, in the context of his friend Teresa's accession to sainthood, how she taught him, a religious scoffer, to love Christ above all things. "The face, the glow, the eyes, the love," he would write of her, "it was all so pure and so beautiful. ... It was like being in the presence of an angel. It changed my life. I have not been the same person since."

It figures. The world of Christ -- forgotten amid the hurly burly of presidential politics -- seems to the people of the new century a strange and different place: hardly the center of all human affairs, which was St. Teresa's depiction of it.

Her advancement to sainthood will not deflect the attention of those invested -- our presidential candidates, for instance -- in the notion that the sun rises and sets in the national capital, and that political strife is our portion in life. The politicians, like the poor in Jesus' formulation, we have with us always: sometimes up, sometimes down, never at a loss for reasons to put the other political party in its place. St. Teresa of Kolkata undoubtedly loved them with all the rest of God's people. She just couldn't quite see why they couldn't quite see.