Funny Definition of Democracy You've Got There, Mr. President

Bill Murchison
|
Posted: May 17, 2016 12:01 AM
Share   Tweet
The opinions expressed by columnists are their own and do not necessarily represent the views of Townhall.com. 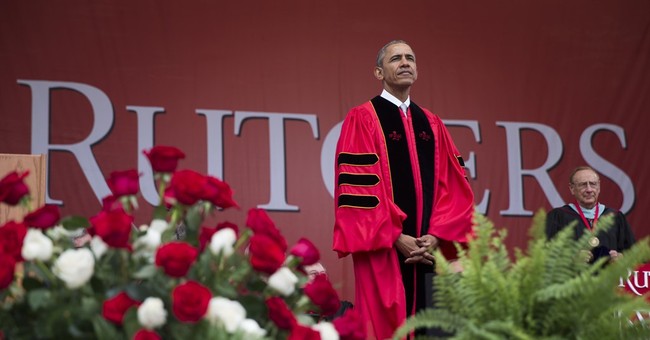 Any Definition of Democracy You've Got There, Mr. President

Do we really need to be talking about restroom access during an explosive political season, with public sentiment already boiling?

Where does the ex-constitutional law lecturer who now serves as U.S. president get off with trying to remake moral policy for a nation of 330 million? Where does he get the idea it's his business to instruct the 50 states that schools must henceforth allow the transgendered -- whatever that curiously concocted word may mean -- to visit the school restroom of their choice? Most of all, where does he suppose he gets the authority to do all this?

Our modern-day Wizard of Oz is blowing and bloviating with glee. It's time someone pulled back the curtains. The president isn't nearly as big a figure as he thinks he is, with power to shut up opponents and magically make the American people over in his own image. No president is that big or grand -- Obama's inflated opinion of himself notwithstanding.

The Obama style, in the absence of congressional support for his policies, is to rule in approved South American style: by issuing orders and directives. For instance, 5 million undocumented aliens, the president says, are entitled to work permits. Or maybe not: The Supreme Court is considering whether the Constitution allows such a sally against congressional authority. Meanwhile, the Obama Department of Energy is trying to close down as many coalmines as possible through the tightening of environmental restrictions.

Obama's constitutional argument, when it comes to restroom segregation, or whatever (boys here, girls there, in immemorial fashion), rests technically on the government's authority over the taxpayer money it spends on public schools. The order goes forth: Let the transgendered decide for themselves what restroom they'd prefer to visit! Really? Why? Because choice in restroom use affirms the rights of boys who have marvelously turned into girls, and of girls traveling in the opposite direction. States that don't get with the program face losing their federal school funds.

All very clear, yes? Except, could our professorial president put his finger on the constitutional clause that gives Washington the final say on sexual mores? One can't recall a single member of the Philadelphia convention, in 1787, arguing the federal government would thenceforth be in charge of sexual identity. The totality of delegates, so far as we know, assumed the matter was in the keeping of churches, families and the sovereign states. Comes now our president to say: All off! The law says no discrimination by sex.

The law does say that; but when the civil rights law in question was passed, half a century ago, the only "transgendered" person anyone had ever heard of was Christine Jorgensen -- over in Denmark. Congress had no intention of laying down new rules about restroom rights. Whence Obama's authority to reset historic moral understandings?

The question is easily answered. He just decided to do it. He said, in effect, all you bigots out there who thought your forbears knew what they were talking about, get over it!

See? To stuff something down the throats of the doubtful and the opposed for the benefit of an electoral faction is the Obama way -- the way to get things done without recourse to argument or intellectual justification.

Polls indeed show the viewpoints of Americans, on moral matters, to be shifting in pronounced fashion, with slight majorities now favoring same-sex marriage rather than opposing it, as was the case a decade ago. Obama tends to see the "arc of history" bending his way, whatever the issue. Might our large-dreaming president be entitled to gratitude for sorting everything out on our behalf? "Have faith in democracy," he counseled Rutgers University graduates only the other day. "It is not always pretty."

He got that part right, anyway.