The Stakes in This Election

Bill Murchison
|
Posted: Feb 23, 2016 12:01 AM
Share   Tweet
The opinions expressed by columnists are their own and do not necessarily represent the views of Townhall.com. 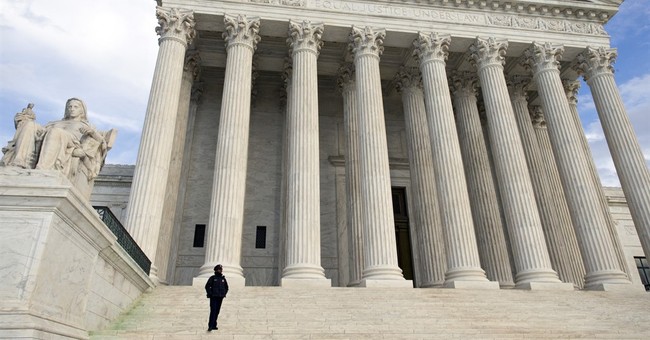 Here in the middle of America's ongoing nervous breakdown, strategic thinking comes laboriously if it comes at all. Yet it seems only reasonable to consider Donald Trump's attempted presidential coup d'etat in light of what happens with the vacancy left by death of Justice Antonin Scalia.

Prior to Trump's pole vault in South Carolina over the heads of his nearest competitors, the topic that was on all minds: How are we going to keep the Supreme Court at least partly friendly to constitutionalists, their most valiant ally having been called from the battlefield?

The New York Times is wrong about many things but right, in my estimation, when it portrays the stakes in the court nomination fight as epochal.

Given one more ally, the court's four liberals could thwart all attempts to call a liberal president and/or a liberal Congress to account -- a feat the court just squeezed out before Justice Antonin Scalia's death, by putting a hold on new Environmental Protection Agency rules meant to start phasing out fossil fuels.

A fifth justice sympathetic to the cause of a "living Constitution," one in constant need, supposedly, of judicial updating, would certainly smile upon liberal efforts to restrict gun ownership; shut down religious escape clauses in cases involving, say, gay rights and contraceptive distribution; narrow the opportunities for independent campaign spending; protect unions representing teachers in their war on educational choice; and heaven only knows what else.

Bigger, badder government is the central progressive cause. (I use the word "progressive" with reservations: "progress" is generally understood as carrying us to a higher level, rather than the meaner estate we would surely encounter under closer government supervision.)

That we nowadays depend on the Supreme Court to blunt assaults from the left is a sign of how low our view of citizen participation has fallen. We're supposed to vote for presidents and members of Congress who prefer liberty to most other goals, leaving the high court relatively little to do, save in a technical sense.

Ha! In these times of citizen lethargy, the Supreme Court has had to do our heavy lifting. How we might fare under a staunchly progressive Supreme Court is a matter best considered late at night, over a sixth shot of bourbon, while a strolling violinist scrapes out "Hearts and Flowers." In 2016, our duty is to prevent such a scene.

So, to get down to (legal) cases: Would a President Trump care enough about the Constitution to fill the Scalia vacancy (I am assuming its continuance next year) with someone akin intellectually to Scalia? Or even to the more politically minded Chief Justice John Roberts? I remain unsure what Trump really understands or cares about, constitutionally speaking (despite the Niagara Falls of boasts and threats rushing forth from his mouth at all times).

Could Trump prevail in November over Hillary Clinton? If not even Republicans trust him, how could we expect genuine conservatives, far less moderates -- and still less so Clinton-skeptical Democrats -- to bow him into office? After a lifetime of unbroken Republican votes, I hereby signal my reluctance to handle a ballot bearing the name of Donald J. Trump.

On whom, if not Trump, might we rely to protect the Constitution? I'll put it this way: on every GOP candidate still standing, down to poor beleaguered and patronized Ben Carson.

The urgency of turning back Hillary Clinton in November is inestimably large -- and not just because of the Scalia vacancy, and of other vacancies certain to pop up before another presidential term runs its course. The New York Times is terrifyingly right. An immediate change in the court's philosophical lineup could change America in ways pleasant and gratifying to the Times.

Gulp. I said six shots of bourbon, not the whole quart.