What This Country Needs 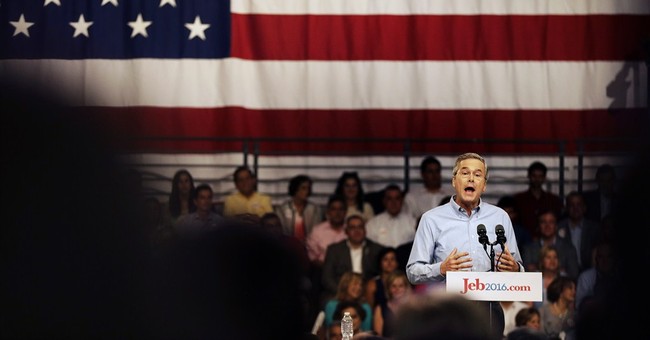 Trending
"The time is out of joint: O cursed spite,

The Amazing Media Machine, dripping oil and self-satisfaction, roared to new life with Jeb Bush's declaration of his presidential candidacy. At last -- something to talk about. We have Jeb -- "Jeb!" as the campaign button puts it -- "stronger than you think" and "doing almost everything to de-emphasize his inheritance," tossed again by waves of controversy over immigration and the core curriculum and, to get down to it, running for president.

Always with the candidate analysis! As with Bush, so with Hillary Clinton: the questions repeated ceaselessly. Can they? Can't they? Why and wherefore? As with these chosen two, so with everybody else: Old Man Sanders and his fuzz-cheeked fans; Marco Rubio and his speed boat; Scott Walker vs. the unions.

Wouldn't it be nice if the issues and perils confronting, prospectively, the people who want to be president got half the attention that funding sources and New Hampshire polls receive? The horserace, the horserace -- is that all any one cares about? What happens after the leader crosses the finish line?

I ask this rude question for a reason. Things are in a mess right now -- a fact that doesn't find much affirmation in the media. Not that the candidates don't point to their righteous intentions respecting the issues of the day: mainly so as to make this part of "the base" or that one take notice. No coherent account of the country's problems gets heard.

So enough of that. Here's what we need to talk about.

1. The parlous condition of the Middle East. President Obama acknowledges we have no strategy for countering ISIS. American leadership, as distinguished from overlordship, needs restoration -- boots on the ground or not, though how you do it without boots I can't imagine.

2. Recent reshufflings of alliances and friendship aren't working. We need to acknowledge as of old the consonance of U.S.-Israeli interests and the non-consonance, for most purposes, of American-Iranian interests. Put it this way: The Israelis are the good guys of the Middle East; the Iranians --well, pffffft!

3. Czar Vladimir Putin seems to have in mind the re-yoking of Russia's neighbors to the Russian ox cart. What does it take to show us that Putin can be trusted as far as anyone can throw a grand piano? American-European unity with the Ukraine and the Baltic countries against Putin's disgraceful designs is of the essence.

4. At home, the biggest problem isn't political; it's moral, conjoined to politics. There isn't much comity among Americans -- less so now than maybe since the pre-1861 period, due to our current gift for using politics as a blunt instrument against the differently minded. We're engaged, whether we know it or not, in extinguishing freedom of thought and speech. The Supreme Court is about to tell us what marriage really "means." Universities put out a crabbed narrative about American guilt for every defect in the modern world: "racism," "sexism," "environmental depredation." America can't catch a break from the hoity-toity thinkers of academe (and the media), who know what a bunch of bums Americans were for most of their history.

5. Naturally this doesn't do a lot for education and intellectual inquiry. Personal identity appears to count more than knowledge or accomplishment.

6. Family -- one of the great "schools" of civilization -- is in disorder as many shun the old structures that supposedly compromise "freedom."

7. The economy! What's all this to do with jobs and pay?! Only everything. A people characterized by decency and common sense can do anything, including make a living. Otherwise, forget it.

Me, oh, my, why does anyone want to be president? But someone's going to get the job and thereupon find, as did Hamlet, following his chat with the ghost, that making things as they deserve to be made is a hard uphill push.

The media from time to time might remind us of this truth and necessity. You know -- in between reporting poll results.