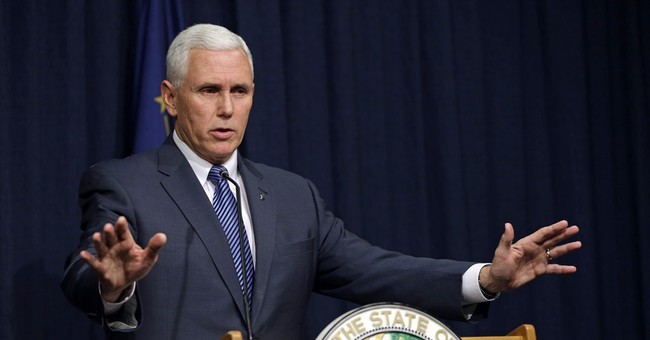 In the political game -- humanity's reward for forbidden fruit chomping in the Garden of Eden -- all disagreements concern power: Who's No. 1 around here; who gets the final say-so.

The ludicrous, and disheartening, dust-up over Indiana's new law on religious freedom shows where growing numbers of Americans think power has shifted with respect to society's fundamental and most important institution, marriage.

Critics of the Religious Freedom Restoration Act, signed into law only last week by Gov. Mike Pence, accuse Indiana of providing citizens legal cover to discriminate against gays -- to deny them jobs or services on "religious" grounds.

The reason these critics crawl with ease through legislators' thought processes is easy enough. In recent months, same-sex couples intending marriage have sued florists and bakers who declined their business on grounds that Christian teaching has historically held male-female marriage to be the estate congruent with God's will.

These set-tos, and others doubtless to come, are one predictable consequence of the spreading conviction that same-sex marriage is about to triumph legally -- hence holdouts against it must be Bad People deserving of restraint, punishment or both.

Nineteen states in addition to Indiana have passed religious freedom laws that might apply in the cases of vendors -- landlords, travel agents, employers of various kinds -- whose theology trumps secular understandings of matters moral and sexual.

Potential applications are in fact much wider: for instance, employer resistance to the provision of birth control devices to employers, a right upheld recently by the U.S. Supreme in the Hobby Lobby case. What about the right (here and there seriously contested) of religious college students to organize exclusively religious clubs on a state university campus?

No possibility seems too far-fetched in these days of aggressive contempt for revealed religion in general and Christianity in particular. I wouldn't put it past a secularist constituency in Oregon or Massachusetts one of these days to attempt hemming-in free speech from the pulpit.

None of these lawyerly gambits is exactly reasonable, but then we hardly live in reasonable times. We live, instead, in times when the foundations of order and rationality appear to be crumbling. To believe that religious sentiments and beliefs and doctrines and teachings ought to influence 21st-century thinking -- in a pig's eye they should!, Indiana law's assailants might as well be saying.

Their language is the language of the civil rights era, when Martin Luther King Jr (a minister of the Gospel, speaking the language of the Gospels) was marching through Selma. "Discrimination" -- in its broadest sense a mark of civilized purpose; to wit, not all human actions are equally worthy -- is the all-purpose reproach to the "backward" and the "bigoted," never mind their rights, never mind their rationales. Away with 'em! Off to the guillotine!

I suppose we could reply, OK, chop and let's get it over with. It's what happens when a new king wins the power and his enemies sprawl in the dust before him.

The disdainers of religious truth, in the form of Scripture and the witness of saints and martyrs, are feeling their oats. The Supreme Court may decree, albeit by the narrowest of margins, a whole new canon of sexual ethics, just right for the 21st century. If you never liked the old canon, or if it embarrasses you as a businessman wary of offending potential customers, you show all bigoted holdouts just how powerless they have become. You say, "Jump!" They respond: "How high?"

The marriage question, deep and profound, and eons probably from settlement, rarely engages those schooled in the art of push-'em-over politics. Arguments against their position would only discommode them. Shut up, shut up!, they explain. If their tactics do no service to republican government or the cause of individual freedom, I suspect they are not much concerned. The pleasure of lording it over the losers, actual or presumptive; pronouncing their arguments unreasonable and unworthy of civilized consideration is more fun in any context than the search for truth.