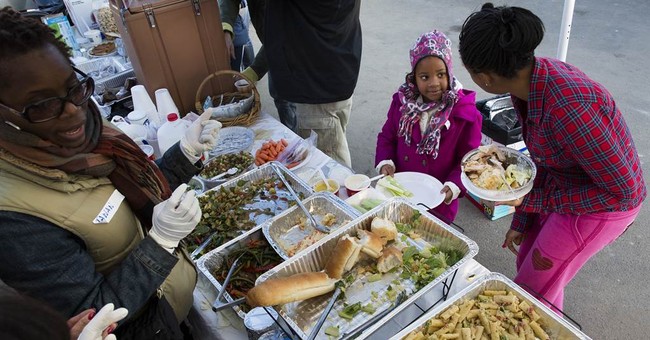 In the dim reaches of long ago, Americans observed a quaint custom. They called it Thanksgiving, or something of the sort.

The custom arose on account of their supposing, often against hard evidence -- weather, war, famine, pestilence, etc. -- there were things for which to be thankful and that, accordingly, thanks were to be rendered. Which meant, by common consent, that the designated recipient of the thanks in question was God.

That was of course before the mighty and influential in American society came to understand they themselves were the authors of all major blessings. The custom called Thanksgiving came to involve in high degree the complicated exercise of administering pats to one's own back.

The country that prepares to sit down with itself at table this Thursday -- table having become the centerpiece of the observance -- will likely minimize the back patting. The reality of things is that things aren't particularly exemplary at the moment. Joblessness persists; economic recovery lags; all Congress does is fight; all the president does, when he isn't doing nuclear deals with foreign wackos, is devise reasons why no one should blame him for anything.

All things considered, that might be enough to say about particular politicians right now. The intrusion of politics into all aspects of daily life is among the largest reasons for today's discontents and apprehension. Maybe it is the biggest reason. Why not? The takeover of life by political plans and political ambitions is marked at all levels of endeavor.

There was a time when citizens judged themselves generally capable of getting along absent the political dream-makers. The dream-makers are too many and too powerful to allow any of us to ignore their presence. They have many plans they want us to execute, such as giving them charge of the provisions we make regarding happiness and health care.

"Choice" is an ideal much praised in political campaigners these days. It turns out in practice that choices, for growing numbers of us, grow fewer and farther between, not smaller and narrower. The majestic oversight of the political process -- from the tax code to the health care market to the policies that imprison children in failing public schools -- brings choice to heel. That is, choice in the free-wheeling sense understood by past generations as underwriting experimentation, risk, venturing, questing. A cautious -- nail biting is not too imprecise a way of putting it -- government of the cautious, by the cautious, for the cautious, understands choice of this sort to be dangerous. What if we lost, or got lost? What if someone got hurt? What if anyone at all got hurt? Wouldn't that be awful?

It would not be so awful as it would be American -- in the old-fashioned, Thanksgiving sense of that still-venerated word: American in rejoicing over risk, rewarding success, offering second, third, fourth, fifth chances to the initially unsuccessful. Or to anyone else. The right to be right or wrong in the weighing of odds, in the making of choices, is the bedrock American right -- guaranteeing nothing in the world but the right to try.

The Thanksgivings of old had purposes as diverse as the people who gathered to offer their thanks and praise. Nonetheless, the praise of God for oversight of the risk-takers and nail-biters alike informed prayers around the vast majority of tables. The priority of God in human affairs was a proposition that commanded general assent. He was in charge. That was more than one could say even of the federal government.

The reconstruction of Thanksgiving to an occasion more like the old one -- humble in thankfulness, grateful for liberties guaranteed to few others in the whole wide world -- would be an enterprise worth tackling one of these days. It would signal, maybe, the rebirth of a nation and a people who once astounded the world with their capacity for hope, for worship, for joy, for -- in the end -- the lax, limber, loose-jointed liberty that made all of it possible and, for all we mere humans know, might do so again.