Of Government and 10.2 Percent Unemployment 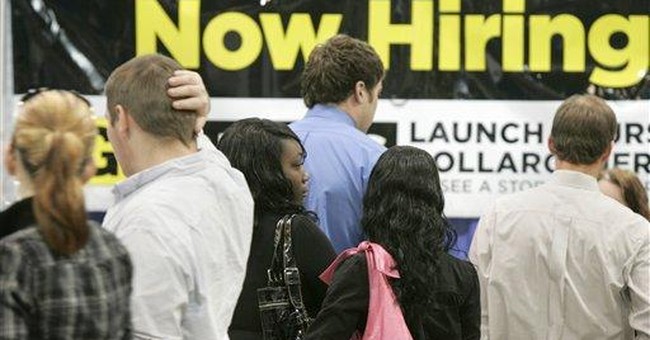 If government would just stop trying to do everything in the world … Well, wait. Let's review what the U.S. government is currently up to:

1. Overhauling health care, or, if not actually overhauling it, talking endlessly about how government should do it.

2. Reconfiguring the way Americans use energy.

4. All the while, trying to restart job growth.

There's a disagreeable pattern here: one of alleged omnicompetence and general nosiness in the service of putting together voter coalitions. We'll get a really close look Thursday when the White House's jobs summit convenes against background noise in the Senate chamber concerning, who knows, "public options," abortion, Medicare cuts, the whole paraphernalia of interference in the intimacies of health and survival.

If government would just stop trying to do everything in the world … perhaps we wouldn't have job summits and anguished debates over public options.

The jobs summit, held amid rightful groaning over a 10.2 percent jobless rate, is case in point concerning the general inefficacy of federal attempts to prescribe for a 300-million-headed economy. That was the "general inefficacy," please note. No one save, I presume, anarchists sees government as a valueless contrivance best abolished and gotten out of the way. Government does a lot of things very well, in the people's broad interest: fight wars, for instance, including the badly maligned wars in Iraq and Afghanistan. Government also does a lot of things very, very, very poorly.

Take job creation. The "stimulus," three-fourths of which hasn't even been spent, has created relatively few jobs: thus this week's summit, featuring businessmen, labor leaders, economists and so on. The idea is to sit around and talk innovative and green jobs, small business incentives, long-range infrastructure planning, exports, private-public partnerships and job-training. Democrats hope if nothing else the summit provides a kick start for plans to extend unemployment benefits. One Democratic senator says government and business could share some labor costs.

Yes. Well. Most of the foregoing ignores two realities: first, that business creates nearly all productive jobs (taking into account government jobs -- e.g., road building -- that proceed from economic growth); second, that the hope of profit is what prods hard work and invention.

In other words, what do we want the jobs summit to focus on -- new government programs or new incentives for profit? Common sense provides the answer: Make it easier, instead of harder, to do business, and business, with a glint in its collective eye, will do the rest.

Arguments for tax cuts and slackened regulation aren't the arguments for laissez faire that "progressives" always make them out to be. Laissez faire means let 'em alone to do whatever they want. Nobody advocates that in undiluted purity. The concept is fun, nevertheless, to contemplate alongside that of make-'em-do-what-Congress-says, which latter concept is a mighty mucker-up of incentives and dreams.

Examples? Here's one from The New York Times, just the other day. We all remember how Congress set out two years ago to address our energy needs by ordering -- yes, ordering -- that refiners more than double their use of ethanol by 2015. If only they could! Says the Times story: "Nobody … counted on fuel demand falling in the United States, which is what has happened during the recession … updated projections suggest that the country is unlikely to be able to use all the ethanol that Congress has ordered up." Never mind, as Gilda Radner used to say.

The perpetual trouble with government regulators is their inability to figure out what the market wants and needs. Bureaucracy plays by the rule book: It says here on page 26 …

And what happens when what it says here no longer matches needs and expectations? At best, a long debate happens. Like now, when the jobs summit has to weigh a variety of "plans," few of which will address the problem as powerfully as would a strong call for more and better profits.

If government would just stop trying to do everything in the world … but you're not holding your breath, right?

Biden's Energy Secretary Just Admitted a Key Fact About Pipelines
Townhall
The latest DeSantis poll numbers in Florida are a total BUZZKILL for Dems AND '60 Minutes'
Twitchy
We Don't Have a President
Redstate
The Morning Briefing: Everything Is Fine—Biden Naps While World Falls Apart
PJ Media