Of Stem Cells And 'Ideologues' 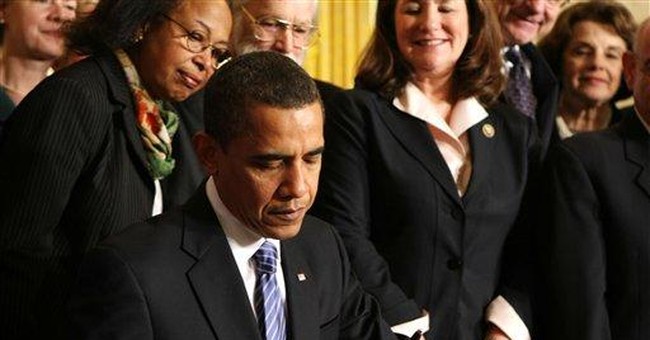 In America, 2009, things happen that you once wouldn't have thought would happen, such as deference toward human life smacked down as outworn ideology. By the President of the United States, no less. So it goes in the Age of Obama.

"Promoting science," said our new chief executive, in overturning a George W. Bush executive order limiting stem cell research on embryos, is "about letting scientists … do their jobs, free from manipulation or coercion … It is about ensuring that scientific data is never distorted or concealed to serve a political agenda -- and that we would make scientific decisions based on facts, not ldeology."

The "ideology" of human life -- life as good, valuable, worthy of protection from unprovoked violence -- underlay the Bush policy of ruling out experimentation on new embryos to find, supposedly, new ways of combating diseases, such as Alzheimer's and Parkinson's and other physical disorders.

Those who regard the destruction of human embryos as equivalent to the destruction of people have made up this stuff -- see? Just spun it out of cotton candy. No "people" there! Just -- you know -- embryos. That's according to the Obama administration's fantastical account.

The President has things precisely backwards. In a stem cell context, the "ideology" is that Science, the great abstraction that only really smart people understand, trumps competing considerations. What Science wants, Science deserves -- didn't you know?

The "facts" of the matter are twofold: 1) a human embryo contains human life -- is human life (as any scientist will acknowledge), at least until destroyed for research purposes; and 2) not even Obama can "guarantee that we will find the treatments and cures we seek" -- though we're going to burn through some goodly number of embryos while trying.

Everyone with a functioning brain cell knew Obama was going to throw out the Bush policy, because he campaigned on the issue. The real shock lies in recollecting just how wobbly is the pulpit from which he preaches. For all the disdain Obama showed the "political agenda" behind the Bush order, his redo on stem cell research is fluorescently political. Liberals, who make up Obama's biggest constituency, dislike the right-wing "fundamentalists" they accuse Bush of courting. Family members of Alzheimer's and Parkinson's patients clamor for intensified research into causes and cures. If you ran for president as the Un-Bush, you know what victory demands by way of performance.

During the campaign Obama talked of finding "common ground" on abortion and, presumably, other human life questions. Common ground turns out to mean, my ground, my rules, of course you're welcome to stand here on those entirely thoughtful and reasonable terms.

The most that opponents of stem cell research get is acknowledgment of their decency -- with the implied caveat that they ought to drop the "politics."

A long presidency, from the human-life (as well as the economic-financial) perspective, this is going to be. Indeed, the stem cell business raises the question -- leave ethics aside -- of how practical a presidency Obama's will prove.

As you reach out to hit the reset button -- Joe Biden's metaphor -- on American government, how much sense does it make to take aboard huge new difficulties as you purport to solve old ones? How about your critics? Do they need more ammunition -- rhetorical variety -- than they had anyway? Do they merit more than mere "respect" (as Obama put it) for a "point of view" being shut down? Or would that be more than "transformational," "post-partisan," politics truly demands?

The stem cell research order, for all that we saw it coming, joins the already long and growing list of fears about Obama's goals and operational style. Still, you learn who the "ideologues" are: people who don't see things the way their new president does.