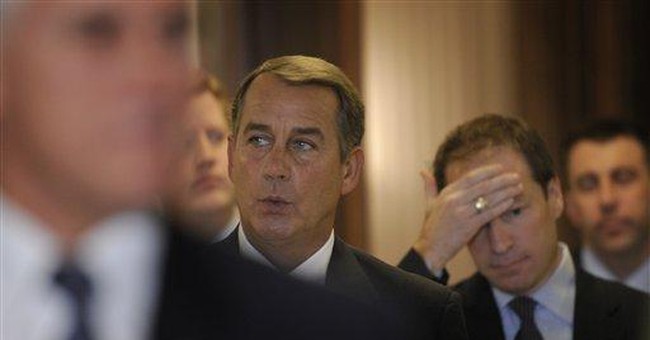 The Republicans have a chance. Not that they deserve it. Not that they won't blow it. Still, a chance who'da thunk it back in those parched and yellow days of November 2008?

The chance the Republicans have, in the winter of 2009, was eminently predictable, stemming from human factors such as -- ahem -- misunderestimation, by the Democratic victors, of the difference between pointing to problems and actually addressing those problems intelligently and usefully.

In politics, no matter how good you say you are, you probably aren't that good: maybe not even half as good. Having learned as much about and from the Republicans, voters have the chance to rediscover the adage applies to both parties.

The Pelosi team in the House, seemingly, isn't one tenth as good and brilliant as they let on during the campaign. Nor -- let us strive to put this charitably -- has the Obama team, including its No. 1 member, moved with the grace and sure-footedness that member led us to expect. Hardly anyone but the House Democrats thinks the -- ha-ha-ho-ho -- "stimulus" bill has more to do with stimulus than with the enactment of boilerplate Democratic goals, chief among these being the distribution of pork. The Democrats shut the Republicans wholly out of the process -- and received not one House Republican vote.

President Obama, without having stepped directly into the kitchen where this gastronomic mess was prepared, gave the concoction his top Michelin rating. Now the Senate is considering a do-over that the Republicans, if they stay united, can force: less spending-for-the-sake-of-spending, more tax cuts aimed at job creation.

We'll see. Meanwhile President Obama, feeling the need to redeem some of his more dicey campaign promises, decides to close Guantanamo Bay's terrorist detention camp, with no plan in hand for dealing with the inmates. He appoints to the Cabinet two top Democrats whose tax policy is to ignore payments they don't care to make. Ex-Sen. Tom Daschle, nominated to head up health and welfare policy, never suspected he owed taxes on a car and driver that a client provided him absolutely free? Ah, the good life in Washington!

If Democrat Tom Daschle's cheerful disdain for the obligation to pay taxes doesn't cancel out Republican Jack Abramoff's freebooting lobbyist career, still it can remind voters that claims of moral superiority from politicians of any cast aren't especially becoming.

Yes, Democrats, too, have feet fashioned of clay -- a problem afflicting the human race since Adam. Even if Republicans aren't constitutionally any smarter, here is their chance to remind voters -- aha -- that the Second Coming didn't occur a few days ago, in Washington, for all the ballyhoo that surrounded the occasion.

Are the Republican smart enough to pick up the balls their opponents keep bobbling? We first have to find out:

* Whether Republicans really believe their own rhetoric about pork. Unless they try seriously to slice big hunks of the stuff from the "stimulus" bill, there's no reason to take them seriously as an opposition party.

* Whether Republicans are as resourceful in debate as are the Democrats. What? Can't show ordinary people how mega-deficits cramp the economy and undermine job creation? Go home. Find some other line of work.

* Whether the "economic" wing of the party understands the desirability of an alliance with "social" conservatives as well as the socials understand -- and practice -- it. I rarely hear the socials griping about the free market; I hear free enterprisers all the time blubbering over what they mischaracterize as foolish fixation on the pro-life and gay "marriage" issues.

* Whether Michael Blackwell, the new, black national chairman, can figure out how to show minorities the blessings of a life consecrated to freedom, not government servitude.

And that's for starters. It goes that way in politics; one day up, the next day down, then up again. Of course you have to know what you're doing. That's the trick on which today's Republicans didn't exactly write the textbook.