The Comparative Insignificance Of Politics 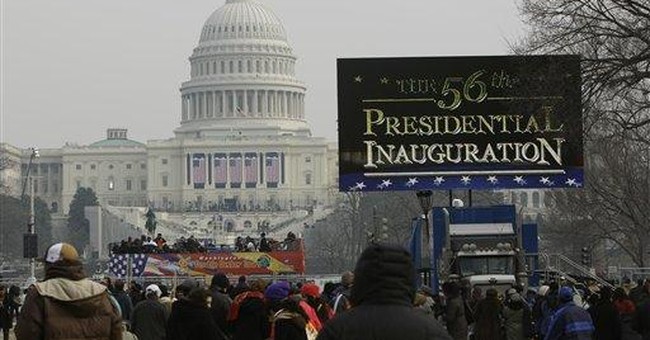 What nobody is going to listen to during inauguration week is cynicism, or anything that savors thereof: the sound of pins pricking happy balloons, the minimizing tone of voice that says, "Ummm, HMMM, just you wait "

When it comes to Barack Obama, we're not into that. We're into -- no cynicism intended -- a Lincoln moment. Really, a post-Lincoln moment, in that when the Great Emancipator took the oath of office in 1861 he had emancipated no slaves whatever, and in truth, didn't make up his own mind to do so for more than two years. Of Barack Obama, 28th in line behind Lincoln (if you count Cleveland's two terms separately), Great Things are expected, and expected imminently.

The "we'll see" factor in all this means that time spent prognosticating about economic recovery, or nuclear weapons in Iran, or Medicare, or Supreme Court appointments doesn't make much sense. The best thing about prognostications is that few who hear them remember them. No one really knows, though media sages -- especially those on the cable channels -- often seem to know everything.

A point worth noting, in precisely this context, is the comparative insignificance of electoral politics in daily life. Comparative -- not absolute. Politics matters. It merely happens to matter less than politicians and their enablers, including many of us voters, generally suppose.

It doesn't matter whether the Republicans or the Democrats are in: They're going to mess up, fall short and disappoint. My own sense of the matter is that Republicans tend to mess up less frequently than Democrats, but on the evidence of the past half dozen years, that claim might not stand up even in a Republican-controlled federal appeals court.

Politics deals most appropriately with the organization of human affairs: arrangements of one sort or the other concerning the ways humans live and work together, the means by which they cooperate to keep from killing each other. In classic politics, some times all you want is to keep people from killing one another. To make them love and admire and respect one another -- that's a different matter.

One gets the idea that much of the nation in January 2009 is poised for a love-fest, if not for the Age of Aquarius. It might be time, after years of acrimony, for a little sweetness and light. Who's going to make that happen, nonetheless? A new president? Not that this one lacks admirable traits, but come on. Governing is about policy choices that a majority inevitability inflicts on a minority, until their respective roles and the policies change again.

Political men and women don't "unite," they divide, as we shall see again and again in due course. Even within their own parties politicians divide over questions of power and how to wield it.

Generally, when a society functions well, it does so in those areas of life that flourish outside the public sphere -- families, churches, civic organizations and the like. Here the members rarely operate on the basis of raw power, acquired during bitter, head-counting contests for supremacy; they operate on the basis of mutuality and of consent to rules clearly understood, only occasionally disputed.

For keeping the national peace, for building highways, regulating the terms of trade, punishing evildoers, and so forth, hire a politician. He understands the uses and forms of collective power. For the upbuilding of community values, the nurturing and spread of shared norms, the cultivation of the spirit, the training of the heart -- apply elsewhere besides the corridors of government. Go to church, get married, or join a club.

What a good thing it is that politicians don't dominate us any more than they do. To the particular politician who undertakes now to lead us -- what can anyone say but God bless and all the luck in the world.