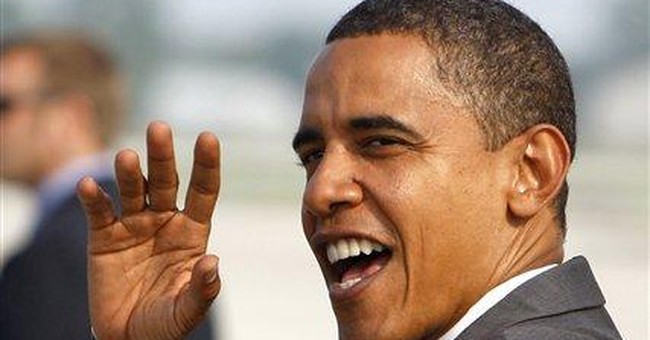 Not a one of us non-economists -- and probably not a lot of economists either --know for sure how the Paulson-Bush rescue plan will play out now or down the line.

I venture a guess that is grounded less in dense economic theory than in some apprehension of the human condition. The guess is that the politicians, 2008 fashion, will muck things up in considerable degree. There is one more point to advance here. It is that the lust for sticking political thumbs into economic pies is the main reason we should keep politicians as far away as possible from whatever table the pie rests upon.

I take up the points in order.

Anyone notice there's a presidential election going on? Both parties desire credit for resolving the present financial mess. Certain members of both parties actually desire such an outcome for its own sake. They're probably outnumbered by those who just want to win the election, but let's give credit where it's due.

Still, the market's Monday sinking spell -- just when we thought we'd heard a bugler blowing "charge" -- was occasioned largely by doubts that the good old Democrats are going to stand by and let the White House claim credit. No, the Democrats are talking about what the Wall Street Journal styled "a regulatory crackdown," with a role for partial government ownership of companies being rescued. So the Democrats also want to be heard calling for compensation limits on executives of said companies. What any of this huffing and puffing has to do with passing the Paulson plan you may guess. The relevance of it all is gaining a little short-term political credit: say, enough to get Sen. Obama elected president.

The second point mentioned above is, I think, more fundamental in nature -- the point about the separation of politicians from economics insofar as human realities make it possible.

The point, I said, is grounded in observation of human nature. The human craving to lay hands on a problem and twist it here and there is immutable. The political expression of that craving frequently has malign consequences. That's because political success depends on white-knighting it -- showing the yokels what the bien-pensants in the House and the Senate have kindly figured out in their behalf. Intrinsically vain, show-offy, meddlesome, the worst politicians think economic statesmanship consists in massaging whatever economic constituencies are most important to their election hopes: Wall Street, labor unions, subprime mortgage borrowers, protection-minded farmers, etc. When election is your highest aim, you go with whatever constituency helps you get elected. Human nature, I said.

As it happens, free market economics, which rightly stresses the superiority of non-interventionist policies, works better in general. It's merely that the market isn't ever as free as it needs to be to function. Groups want favors. They want backs scratched and ears rubbed. As much as is possible, and as often. Pretty soon you've got a subprime mortgage mess, and a $700 billion bailout of institutions "too big to fail" without taking down their neighbors.

Here we are, then -- beginning, it would appear, a new cycle in which regulators and bureaucracies, responsive to the political trade, make the big, important calls for us. You know -- to protect us. That's until somewhere down the line, as during the wreck of the Carter presidency, we reacquaint ourselves with the cost of political protection: the distortions, the unfairnesses, the political logrolling that goes into government control.

How the Democrats will acquit themselves this week, with the Paulson package on the table, we'll see soon enough. Will hopes and plans and designs for the election of Barack Obama drive the train over Republican objections about even more government intervention -- if possible -- than the Bush administration proposes?

I, um, don't believe I'd rule it out, on the basis of what we're seeing right now.