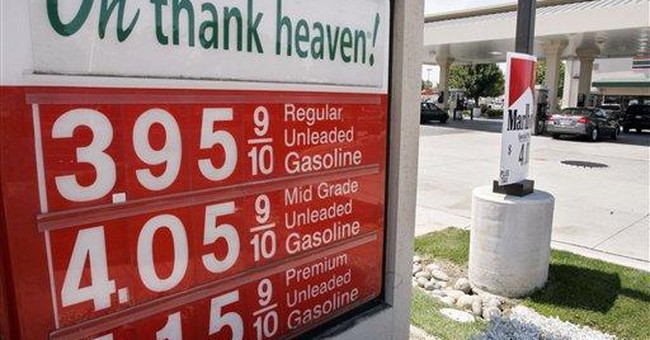 One major problem with politics -- as we've all probably figured out by now -- is that politicians view every human challenge as political in nature, meaning, particularly these last few years. Objective No. 1 in the political trade is sticking to it The Other Party.

What else could explain Democratic obstinacy and obfuscation over offshore oil drilling? The national interest certainly couldn't explain it.

A basic principle of oil exploration is that you look for oil where it is, instead of where you'd like it to be. Assuming, in the Democrats' case, there's any place they would like it to be.

When, over the weekend, Speaker Nancy Pelosi announced she was ready to let the House consider expanded offshore drilling, she had to do so in the context of whamming the Bush administration, which, she alleged, "has increased our dependence on foreign oil, damaged our economy and left consumers paying record prices at the pump."

We all may be assured of one thing: The speaker herself isn't interested in finding oil. Her recent claim -- "I'm trying to save the planet" (by keeping drillers away from offshore waters) -- has less to do with securing stable energy supplies than with helping guide the Democrats to absolute control over Washington, D.C. The nation's need for energy can wait a bit. First, we have to kick a few more Republicans in the pants.

The speaker's offer to "consider opening portions of the Outer Continental Shelf for drilling" comes to us accompanied by language about "appropriate safeguards" -- whatever "appropriate" means to a congressional committee -- and repudiation of "taxpayer subsidies to big oil." (That entire countries -- e.g., Russia, Iran, Venezuela and Saudi Arabia -- constitute "big oil" in a special and dangerous sense is a thought one guesses the speaker wouldn't utter under torture.)

The speaker's turnaround on "considering" offshore drilling likely has more to do with voter anger over high gasoline prices than with sudden recognition that, oops, it's time to increase domestic oil supplies.

Demagoguery -- note the Greek origins of the word -- has been with us always: an indestructible part of our Edenic inheritance. A self-styled leader of "the people" wants power. He -- or she -- pumps the voters up, promising to bring down the bad guys and raise up the good ones. Him -- or her -- for instance.

Well, all right, we'll never have done with demagogues and demagoguery short of the Second Coming. What we can do meantime is sniff it out, point to it, warn of its consequences. The consequences of demagoguing the enterprise of drilling oil wells is potentially vast. Nobody, until recently, saw anything wrong with drilling wells, especially if the wells were in godforsaken places like, ahem, my native Texas. Or in Texas' offshore waters. You wanted oil? You drilled. It was as simple as that. You drilled, you found the oil, brought it to the surface, refined it, sold it.

During the "energy crisis" of the '70s, when reduced imports of oil caused prices to soar, anti-oil company demagoguery flowered. The formerly serious and sensible cold war hawk, Sen. Henry (Scoop) Jackson of Washington, memorably waggled his finger at an array of oil company presidents on whom he threatened to "slap subpoenas" if they didn't cooperate with the public interest represented -- oh, so clearly! -- by the senator from Washington. Successor demagogues have this year staged the same sideshow in variant forms. As if oil companies existed to bleed the customers rather than satisfy their needs!

Forget logic. Forget realism. Demagoguery of the Pelosi-Democratic party sort is about acquiring political advantage through smearing an industry that potential Democratic voters can be persuaded to dislike and punish.