Betsy McCaughey
|
Posted: Mar 03, 2021 12:01 AM
Share   Tweet
The opinions expressed by columnists are their own and do not necessarily represent the views of Townhall.com. 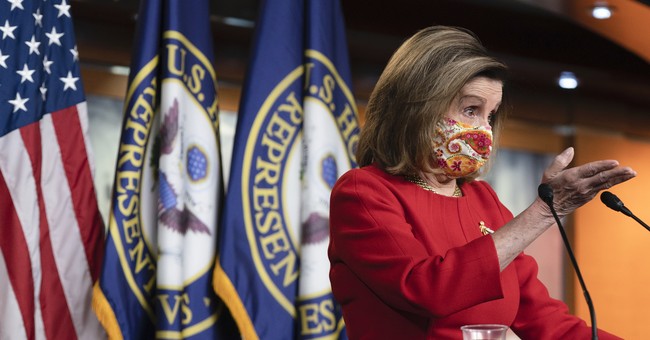 Nancy Pelosi's top priority is to turn America into a one-party nation ruled by Democrats. Her bill, H.R. 1, to be voted on this week, trashes the U.S. Constitution in an attempt to rig the system and make it virtually impossible to elect a Republican president or Congress again. It's a power grab.

The bill eviscerates state voting laws and forces all the states to conform to a set of rules that includes automatic voter registration. Anyone who goes to a DMV or applies for food stamps, Medicaid or other social services, or attends a public college will be automatically enrolled to vote. Noncitizens are obligated to identify themselves and opt-out, but there are no criminal penalties if they don't. From California to New York, Dems are already pushing to allow noncitizens to vote in local elections. They see this as their roadmap to a future permanent majority

H.R. 1's bag of tricks also includes banning state voter ID requirements. Anyone can show up on Election Day to vote, registered or not, and simply sign a statement that they're a legal voter. H.R. 1 is being sold as a reform to make voting easier. In truth, it makes cheating easier.

H.R. 1 compels states to send out absentee or mail-in ballots universally, favoring Democrats who tend to use this method. It also forces states to count ballots that arrive by mail as late as 10 days after the election. Say goodbye to election night finality.

H.R. 1 also legalizes ballot harvesting, a practice many states are struggling to stop. A political organization pays a worker to walk through housing projects and neighborhoods, knock on doors, offer to help residents fill out the ballots they've received in the mail, and then submit the piles of completed ballots. It's a recipe for fraud.

The authors of the Constitution worried that Congress would try to seize control of presidential selection using dirty tricks like those in H.R. 1. That's why they acted "to take the business as far as possible out of their hands," according to Charles Pinckney, a framer from South Carolina.

Congress, said Pinckney, "had no right to meddle" in it. The framers provided in Article II, Sec. 1 that only state legislatures would have the power to determine how the president is chosen. No national rules.

But Pelosi has no qualms about trashing the Constitution to kneecap her opponents.

H.R. 1 also asserts Congress has the authority to make the District of Columbia into the 51st state. That would hand Democrats two more Senate seats, breaking the current 50-50 tie. Voter registration in D.C. is 76 percent Democratic and only six percent Republican.

Pelosi ignores that only a constitutional amendment can change the status or parameters of the District.

H.R. 1 also would expose supporters of conservative causes to disclosure and harassment. In 2013, then-President Barack Obama's Internal Revenue Service tried to strong-arm tax-exempt Tea Party organizations into disclosing their donors. Pelosi's bill would give that thuggish tactic the force of law, requiring organizations to disclose their donors.

When Alexander Hamilton, James Madison and John Jay advocated that the public ratify the new U.S. Constitution, they signed under the name "Publius" to shield their identities. Americans today deserve the same freedom, whether they're writing or donating to causes.

Pelosi's democracy-destroying bill will pass in the House, where Democrats have a majority. President Joe Biden has promised to sign it if it passes the Senate. So much for Biden's unity pledge.

Under current Senate rules, 60 votes are needed to enact H.R. 1. Democrats don't have them yet. It's up to Senate Minority Leader Mitch McConnell to protect the 60-vote filibuster rule. He's called the bill "the Democratic Politician Protection Act," and deplores it as a naked attempt to change the election rules to benefit one party.

The bill is just what you'd expect from Pelosi. But the Senate needs to rise to the occasion and protect honest, competitive elections -- the foundation of our freedom.