Betsy McCaughey
|
Posted: Jun 05, 2019 12:01 AM
Share   Tweet
The opinions expressed by columnists are their own and do not necessarily represent the views of Townhall.com. 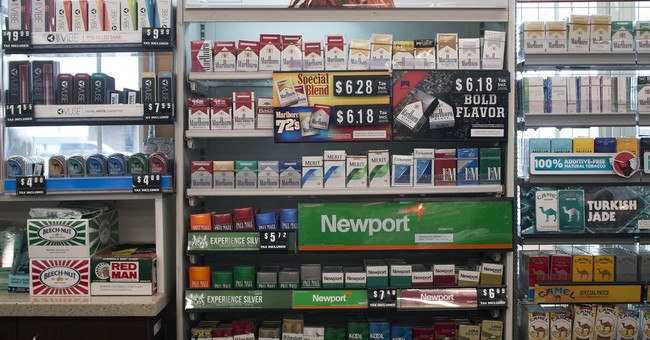 The nation's biggest meeting of cancer specialists unveiled several breakthroughs on Saturday. The horrible news is what's not improving. Only a miniscule 4% of men and women at high risk of getting lung cancer from smoking go for a CT scan to detect it while it's curable. That 4% figure has barely budged in a decade. Lung cancer detected before there's coughing or other symptoms is at least 80% to 90% curable. People who wait until they feel sick have as little as a 10% chance of surviving.

Cost isn't the problem. Insurance can pay for CT (short for computed tomography) scans. But the public is clueless that they're necessary. There's no public campaign because lung cancer is a politically incorrect disease, tainted by its link to tobacco. Most politicians, charities and corporate underwriters haven't wanted to touch it.

Unlike breast cancer. Everyone wants to join the war against that. An endless array of products from M&Ms to lipstick display the pink breast cancer ribbon. In 2016, all the presidential candidates were asked where they stood on breast cancer, as if anyone could be for it. A Maine newspaper announced that Sen. Susan Collins is "working to end breast cancer by 2020." Here in New York, Gov. Andrew Cuomo bragged about a 2016 state law barring copays for breast cancer screening. Never mind that federal law already accomplished that. Politicians hustle to bask in the glow of a pink campaign about a blameless disease.

All that publicity and political mojo is working. An amazing 68% of women get regular mammograms at 55 and over. "Women don't even ask their doctors if they should get a mammogram. They just do it," explains Dr. Daniel Libby, clinical professor of pulmonology at Weill Cornell Medical College. "But they're not hearing a message that if they have a history of smoking, they also need a CT lung scan."

Lung cancer advocates need to take a page from the pink ribbon campaign. Nearly twice as many women die from lung cancer as from breast cancer. Women smokers are 1.5 to 2 times as susceptible to lung cancer as men who smoked the same amount, warns David Yankelevitz, professor of radiology at Mount Sinai Medical Center in New York.

Fear of false positives is preventing some people from getting scanned. With a false positive, the scan shows a spot on the lung, and the patient undergoes a biopsy or waits months in anguish for another scan and then finds out it isn't cancer.

New research published in Nature Medicine shows that artificial intelligence -- computers making decisions based on algorithms -- may soon eliminate most false positives. Until then, they're no joke, says Libby, but hardly as awful as discovering you've got a later-stage cancer that's not curable.

Now that nonsmokers are affected, the stigma around lung cancer is fading. Sens. Dianne Feinstein, Marco Rubio, Joe Manchin and Shelley Moore Capito are sponsoring a bipartisan bill to promote lung cancer research and detection, particularly for women. "In 2019, an estimated 66,000 women will lose their lives to this terrible disease," says Feinstein -- not to mention the death toll for men. Now that politicians are grabbing the issue, the next step is choosing a ribbon color.