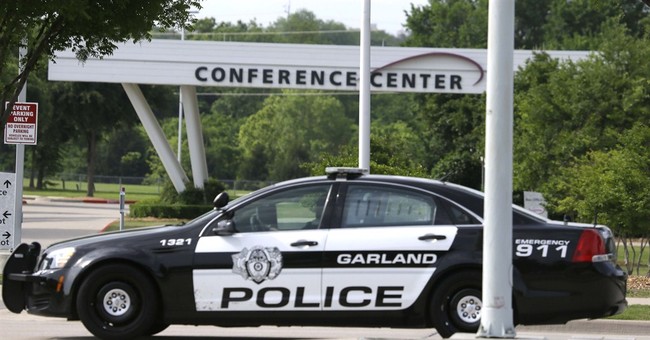 Culwell Center first hosted on January 17th Sound Vision Foundation’s Stand with the Prophet, which it stated was more than an event. It was “A movement to defend the Prophet Muhammad, his person, and his message” directly responding to the murder of 16 people, mostly Charlie Hebdo satirists, in Paris.

Culwell Center next hosted on May 3 the American Freedom Defense Initiative’s (AFDI) Muhammad Art Exhibit and Contest, which paid tribute to Charlie Hebdo satirists. It also responded to Sound Vision’s event, which in coordination with the Council on Islamic Relations (CAIR) was part of a greater effort advocating Shari’a compliance throughout American laws.

Coverage of the January 17th event focused on “Islamaphobic” protesters “picketing an Islamic conference.” Yet most reporters never mentioned the speakers who have publicly affirmed “killing as an essential element of Islam” and have known ties to terrorism.

To be “anti-Islam” and “anti-Shari’a” is to reject submission to Allah and to the legislation outlined in the Qur’an. There is nothing bigoted, racist, or personal in rejecting a political ideology that opposes the U.S. Constitution. Even the European Court on Human Rights has ruled more than once that Sharia law is “incompatible with the fundamental principles of democracy.”

This type of reporting also promotes a culture that normalizes gender violence, which ranges from sexism to blaming the victim for her abuser’s crime. For example, instead of reporting on Shari’a law in Irving, Texas, Dallas Morning News reporter Alvi Selk asked its mayor Beth Van Duyne bizarre and sexist questions about her child custody arrangements, boyfriend, and how she “balances work life, family life, and life in general.” I can’t recall any reporter in my lifetime asking a male politician how he “balances” fatherhood, life and public duties, or to disclose his child custody terms. Attempting to shame women, not men, is only one of many stigmas with which women in public positions must deal.

If women’s rights were an issue, reporters might cover abuse of women and girls permitted by Shari’a that might help save lives. The Times of London first exposed and helped bring to justice a pedophile ring hidden by city officials and police for 16 years. News organizations also played a helpful role in Scandinavian and Western European countries grappling with near-bankrupted budgets largely due to welfare and crime costs associated with Shari’a compliant communities.

Reporters could also write about good news occurring worldwide. Christians are outpouring love towards Muslims from Chapel Hill to Upsalla, bringing healing to the voiceless and oppressed.

Instead, by blaming Geller, a Jewish woman, for the failed hate crimes committed by Islamic gunmen on May 3, the media only reinforces well-known stigmas associated with “Battered Wife Syndrome.” Blaming the victim for the offender’s crime and making excuses for the offender hurts vulnerable women and girls who unlike Geller have no resources or voice to defend themselves.

I asked questions after the January 17th Culwell Center event to feminists and human rights groups, which still remain unanswered.

Are there any other feminists and human rights advocates like Geller who are demanding that women and girls in America be protected from Shari’a law? Why is there silence about Shari’a, which legalizes: