A New Front in the War on Free Speech

Bernard Goldberg
|
Posted: Oct 17, 2017 12:01 AM
Share   Tweet
The opinions expressed by columnists are their own and do not necessarily represent the views of Townhall.com. 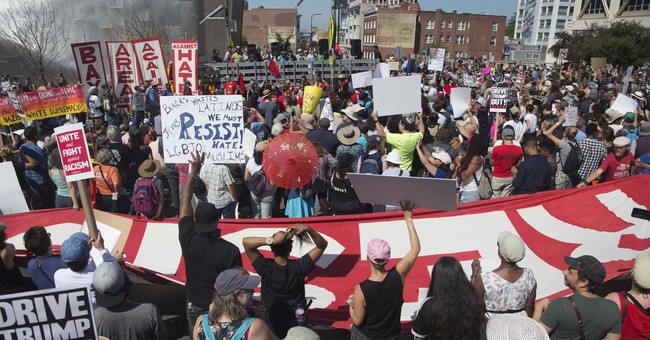 Hothouse flowers threw another hissy fit on a college campus recently. But this time it was different. This time the target in their progressive crosshairs wasn't some conservative bogeyman whose views were deemed unacceptable and so had to be shouted down.

This time left-wing students, at the College of William & Mary in Virginia, went after the ACLU, an organization that champions all sorts of liberal causes and no one is calling right-wing.

Call me a bad person, but it's fun to watch the left devour its own. And here's something else to giggle about: The ACLU speaker who was silenced by the progressive mob was on campus to speak about ... free speech on campus.

You can't make this stuff up.

This time the speech police were students affiliated with Black Lives Matter and were angry with the ACLU for defending white supremacist rights to rally in Charlottesville, Virginia. So instead of letting the woman from the ACLU speak, they chanted things like, "liberalism is white supremacy" and "Your free speech hides beneath white sheets" -- reportedly for a full hour.

It was bound to happen. Why would left-wing students be content with simply shouting down conservatives? Why wouldn't they shout down any views they don't like? That's what authoritarians do. Stalinists aren't happy until everybody thinks the way they do, until all unacceptable ideas are crushed.

So, after shouting down the ACLU representative, the Black Lives Matter students issued a statement trying to justify their actions. "(O)ur protest of the ACLU event ... was driven by our firm belief that white supremacy does not deserve a platform. The right to free speech is a fundamental human right. However, speech that condones, supports or otherwise fails to explicitly condemn injustice must be directly confronted."

What they mean is that "The right to free speech is a fundamental human right" -- as long as we agree with what you have to say. And what they mean by "directly confronted" -- is shouted down.

You would think that by the time they reach college they'd understand a little something about how our free country operates; you'd think they'd understand that the First Amendment protects all kinds of speech -- not just speech Black Lives Matter deems acceptable. Once upon a time, it was liberal college students who fought to expand free speech on campus. Too often these days, it's their ideological progeny that's trying to shut it down.

The grownups who, at least on paper, run the school, said the behavior was "not acceptable," but citing privacy concerns wouldn't say what they would do about it. Here's an idea: How about expelling the students who shouted down the woman from the ACLU. Or would that offend the delicate hothouse flowers and cause them too much mental anguish?

Any time campus bullies get away with shouting down speakers it only encourages more of the same. We've seen plenty of it already at too many colleges. And unless the authoritarians are sent packing, we'll see a lot more.

But what we've been witnessing on campuses for some time now is only a piece of a bigger picture involving left-wing sanctimony. In the Age of Trump, progressives, who see themselves as noble and virtuous, have become quite open about how hateful they can be.

You've heard about the CBS executive who got fired after the Las Vegas massacre for posting this observation on her Facebook page: "I'm actually not even sympathetic bc country music fans often are Republican gun toters."

And after Hurricane Harvey, a professor at the University of Tampa tweeted that red state Republicans pretty much deserved what they got. "I don't believe in instant Karma but this kinda feels like it for Texas," he wrote. "Hopefully this will help them realize GOP doesn't care about them." And when Irma hit Florida, he took to Twitter again: "Those who voted for (Trump) here deserve it as well."

Not everybody on the left, of course, is so crass. But what we do have here is a modern-day progressive mindset: If you don't think the way we do, if you don't believe in what we believe, if you hold views we don't like, then you have no right to speak on campus. And in the grownup world, if you voted for Donald Trump you don't warrant our empathy even in the wake of a massacre in Las Vegas or natural disasters in Texas and Florida - because you're Republicans.

So Republicans, take note. Donald Trump touched a nerve when he ran against the liberal media that a lot of ordinary Americans had lost faith in. Running against self-righteous progressives in 2018 and 2020 may hit the same nerve.