Freedom From Speech on Campus

Bernard Goldberg
|
Posted: Sep 26, 2017 12:01 AM
Share   Tweet
The opinions expressed by columnists are their own and do not necessarily represent the views of Townhall.com. 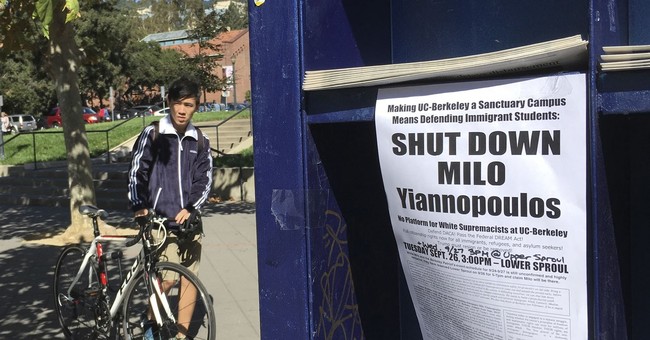 It's not exactly a secret that liberal college campuses are among the most illiberal places in America. Liberals talk a good game about diversity -- but it's not diversity of opinion they have in mind. Just ask any number of prominent conservative speakers who got shouted down when they tried to speak on campus.

We know about the anecdotal evidence -- the conservatives whose talks were disrupted at University of California, Berkeley, at Middlebury in Vermont, and at Claremont McKenna College in California, to name just a few. But now we have an important broad-based study that documents just how intolerant those liberal snowflakes really are.

John Villasenor of the Brookings Institution surveyed 1,500 undergraduates around the country and found a disturbing number of them don't have a clue as to what the First Amendment is about. And large numbers of students have little interest in even listening to opinions they don't like.

The survey asked if the First Amendment protects "hate speech"?

It does, but a stunning 44 percent of the students said that "hate speech" is not protected by the Constitution. Thirty-nine percent said it is.

The survey also asked about what actions the students thought was allowable to silence speakers they don't like. Here's one of the questions:

"A student group opposed to the speaker disrupts the speech by loudly and repeatedly shouting so that the audience cannot hear the speaker. Do you agree or disagree that the student group's actions are acceptable?"

More than half of the students, 51 percent, said it was acceptable to shout down the speaker; 49 percent said it wasn't.

How about violence? Do students think that actual violence is acceptable to silence views they don't want to hear?

While 19 percent appears to be a small number, that's still 1 in 5 students who support physical violence to shut down speech they don't want to hear. As the study points out: "Any number significantly above zero is concerning."

And when asked which fostered a better education -- banning speech on campus that offends some students or allowing all kinds of speech even if some students are offended, a majority of students -- 53 percent -- said they prefer attending a school that prohibits "offensive" speech. (At one college rally a student was holding a sign that read: "We Condemn Freedom of Speech that hurts other people's feelings.")

How did so many college students become so close-minded and intolerant of opinions that don't jibe with their own? This isn't something that happens overnight. It's a malady that evolves over years.

Let's remember that while a lot of college students went through middle school and high school learning all about how Columbus was a white European who destroyed the New World he came to discover, and about how our Founding Fathers were racists, and about how to put a condom on a banana, they clearly weren't taught much about civics and the Constitution. And they apparently weren't encouraged to expose themselves to alien views, opinions different from the ones they hold.

But surely their professors on campus know better. So why haven't they drummed into the heads of these pampered brats some useful information about the First Amendment? Why haven't the grownups on campus done more to encourage civil liberties and open debate?

But who cares about any of this if you're not a conservative on campus who's been marginalized and bullied by the hard left? Well, consider this: You can't have a free country -- not for long anyway -- without the freedom to speak your mind without fear of being shouted down or punched in the mouth by people who don't like what you're saying. Someday, these cupcakes will leave college and enter the real world. What then?

Now, when they're exposed to views they don't like, some school administrators offer them puppies and bubbles and coloring books to get over their trauma. Recently, at Berkeley, students were offered free mental health therapy if they were emotionally shaken by the views of a young conservative speaker named Ben Shapiro.

You think when they leave college their bosses in corporate America will give them a coloring book if they're having a hard day?

The Brookings study states that, "Freedom of expression is deeply imperiled on U.S. campuses." That's not only a college problem. That's an American problem.

So here's an old school way to deal with the problem: Expel students who disrupt speakers expressing views they don't want to hear. And give them some Play-Doh on their way out.

But that would require a modicum of backbone by college presidents, something that sadly seems to be in short supply.