Where Does It End?

Bernard Goldberg
|
Posted: Aug 22, 2017 12:01 AM
Share   Tweet
The opinions expressed by columnists are their own and do not necessarily represent the views of Townhall.com. 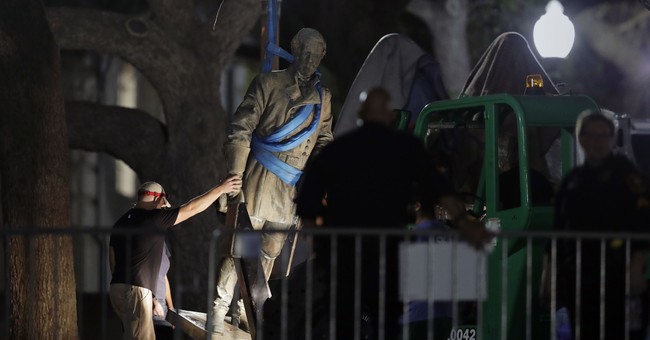 When I was in high school, in the early 1960s, my family embarked on a car ride south -- from New Jersey to Florida, where we had relatives. Along the way we got hungry so my father pulled his 1954 Plymouth into a parking space outside a country roadside restaurant. Just as we were about to get out of the car, I noticed a sign that said, "Whites Only" or "No Coloreds" -- something like that. My parents weren't bigots. They were appalled at what they saw on TV coming out of places like Mississippi and Alabama. But they were hungry and were people of a certain age and generation. They just wanted a sandwich before getting back in the car. I told them I wasn't going in, that I wouldn't go near a place run by racists like that. That's all it took. My father put the car in reverse, pulled out of the parking space, and we were heading south again.

I tell you this story to make clear that I had no time for bigots then and nothing has changed over the years. Although I was born in the south, I have no emotional connection to its history. Maybe that's because I was born in the South ... Bronx.

So I understand why there's so much concern over statues in public places honoring Confederate soldiers who fought a war at least in part to maintain traditions -- traditions that included owning slaves.

You can make a case that Donald Trump was the wrong one to ask the question, but it's a question worth considering: Where does it end?

Is taking down a statue of Robert E. Lee or Stonewall Jackson or Jefferson Davis enough?

In Durham, North Carolina, a mob chanting "No KKK; no fascist USA," slung a rope around a statue of a generic confederate solder and pulled. After it toppled to the ground, they kicked the heap of crumpled metal.

Is that where it ends -- with a mob deciding what statues stay and which ones go?

Asking who's next and where does it end doesn't make you a white supremacist, or even unreasonable. It doesn't mean you sympathize with the reprehensible neo-Nazi slugs who marched in Charlottesville. But as Kyle Smith put it in National Review, "We are reaching the point where, if the Washington Monument were to be blown up tomorrow, it would be anyone's guess whether jihadists or the 'anti-fascist' Left did it."

George Washington, after all, owned slaves. And if we don't blow it up, how about just calling it something else? And while we're at it, how about changing the name of the capital of this country?

Or maybe just changing the name of a few parks will do.

A pastor in Chicago has asked the mayor to remove the names of two presidents -- George Washington and Andrew Jackson -- from parks on the South Side because, he said, the city should not honor slave owners in black communities.

And what about the Jefferson Memorial? Should we board it up or just call it something else?

Should we change the name of Yale University because Elihu Yale, in addition to being a merchant and philanthropist, was a slave trader?

And what about Japanese-Americans? Do they have a case for tearing down monuments honoring Franklin Roosevelt, a man who put more than 100,000 innocent Americans of Japanese descent behind barbed wire in remote internment camps during World War II. Talk about stains on our history!

Leftists already shut down speech they don't like on college campuses, including public universities funded by taxpayers. Is it such a stretch to silence people we detest from the public square?

And if you think the anti-fascist activist gang cares about the First Amendment for people they hate, you're naive. These are not the ideological descendants of the civil rights heroes of the 1960s; they're more like the progeny of the hard left radicals who wanted change "by any means necessary."

So, let me ask one more time: Where does it end?