The Strategy of Going Too Far

Ben Shapiro
|
Posted: Sep 27, 2017 12:01 AM
Share   Tweet
The opinions expressed by columnists are their own and do not necessarily represent the views of Townhall.com. 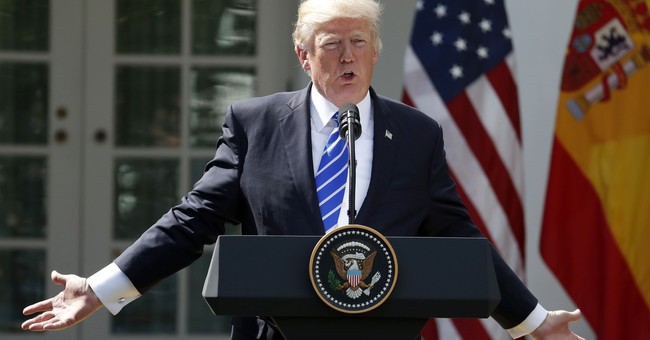 There's a running argument on the right these days. It begins each time the left overreacts to a Trumpian move with wild radicalism, alienating Americans in the middle. Some on the right attribute the left's penchant for political hara-kiri to President Donald Trump's masterful manipulations -- it's just part of his genius. But the more plausible argument is that Trump isn't playing anyone -- he's perfectly authentic. And most importantly, he always goes just a bit too far.

Going too far can be a political liability. But it can also tempt opponents into a game of chicken. And that's where Trump's hyperbolic approach to every issue sometimes redounds to his benefit. If Trump had stated last week in Alabama that he opposed former NFL quarterback Colin Kaepernick's brainless decision to kneel for the national anthem, he'd have been well in bounds. Instead, Trump went further. Channeling his old WWE/"The Apprentice" persona, he bellowed, "Wouldn't you love to see one of these NFL owners, when somebody disrespects our flag, to say, 'Get that son of a b---- off the field right now. Out. He's fired. He's fired!'"

The left leapt on Trump's over-the-line statements -- and proceeded to land directly on a political land mine. Instead of ripping Trump for overstepping the boundaries of the presidency and talking about the necessity for preservation of First Amendment freedoms, the left called for widespread participation in kneeling. They couldn't merely side against Trump; they had to side with Kaepernick.

This, of course, was political idiocy. The vast majority of Americans think that kneeling during the national anthem is disrespectful, and that it represents a slap in the face to the military and the American flag. They think this because Kaepernick has explicitly said so: "I am not going to stand up to show pride in a flag for a country that oppresses black people and people of color." But prompted by a strategy of knee-jerk massive retaliation, the left decided to jump on board with Kaepernick anyway.

Meanwhile, Trump's own supporters saw nothing wrong with his statements -- particularly once the left knelt with Kaepernick. Where some Trump supporters might have been tempted to say that Trump went too far, now they were more likely to back him -- after all, he was speaking truth to those who would protest the flag.

All of which suggests that saying too much is actually a smart way to trigger your enemies and rally your base. President Obama knew this; it's undoubtedly why he made statements about Trayvon Martin looking like his fictional son. Sticking a fork in the eye of your enemy sometimes leads to your enemy blindly groping his way into the street, only to be mashed by the passing cars of political reality.

But none of this is good for a more rational politics. We should all be able to recognize that kneeling for the national anthem is foolishness, and that the president has no business calling for the firing of those in the private sector exercising First Amendment rights. That requires no overreach, and it doesn't make headlines. But it does create a unity sorely lacking in our politics.