Ben Shapiro
|
Posted: May 25, 2016 12:01 AM
Share   Tweet
The opinions expressed by columnists are their own and do not necessarily represent the views of Townhall.com. 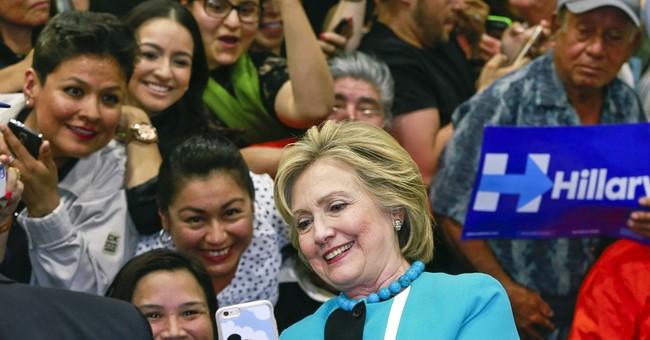 Is Hillary Clinton the Only Innocent Person in a 10-Mile Radius?

Clinton will tell you how honest and transparent she is, right after cackling hysterically to stall for time. She will tell you that she always cooperates with law enforcement, that she has attempted to turn over all materials to relevant authorities, that it's just one giant coincidence her friends and family are constantly being swept up in prosecutorial dragnets.

It isn't a coincidence.

Just look at the people with whom Clinton surrounds herself.

Her husband, former President Bill Clinton, is a serial philanderer, a perjurer, a sexual assailant and an accused rapist.

Clinton's former Chief of Staff Cheryl Mills stalked out of an FBI interview after being asked about Clinton's emails. Mills worked as a close assistant to Clinton back during the go-go 1990s. According to Judicial Watch, she helped prevent the Clintons from turning over 1.8 million emails to that organization during litigation. Mills was also placed in charge of document production for the State Department on the Benghazi investigation. According to Gregory Hicks, the second-ranking U.S. diplomat in Libya at the time of the attack, lawyers told him not to talk to Congress.

Clinton's assistant, Huma Abedin, has been dragged into the Clinton email-server scandal. Even after she left Clinton's staff at the State Department, Clinton granted her "special government employee" status even as she took pay from the Clinton Foundation. Abedin's husband is, of course, former Congressman Anthony "Carlos Danger" Weiner.

Clinton's chief fundraiser for years was former Virginia Governor Terry McAuliffe. He's now under investigation by the FBI and the Department of Justice for fundraising improprieties, including his time at the Clinton Global Initiative. He personally guaranteed the Clintons' loan for their Chappaqua home.

Clinton's foreign-policy guru is Bill Clinton's former aide Sidney Blumenthal, a radical-leftist hatchet man so corrupt that the Obama administration refused to allow Clinton to hire him during her role as secretary of state. Nonetheless, the Clinton Foundation paid him $10,000 per month, even as he sent her memos about foreign policy that included subjects upon which he was doing separate business.

So, is Clinton's association with a number of suspicious characters just a giant coincidence? Or, perhaps, is it a sign that Clinton herself is corrupt and surrounds herself with other corrupt individuals willing to protect her?

It's hard to believe the former, given that Clinton sticks by her corrupt friends for decades. Corruption surrounds her like the cloud of dust that always seems to follow Pig-Pen. That won't change if she's placed in the White House -- it will get worse. Power always makes corruption worse. Clinton should know: She's the only first lady ever fingerprinted by the FBI, and she'll presumably be the first secretary of state interviewed by the FBI. As president, she'd make her husband's deeply corrupt administration pale in comparison.

So no, Clinton can't be trusted. There's a reason polls show that even fewer Americans trust her than the narcissistic pathological liar Donald Trump. All of which means that this election cycle now pits the two most dishonest people in the history of American electoral politics against each other.