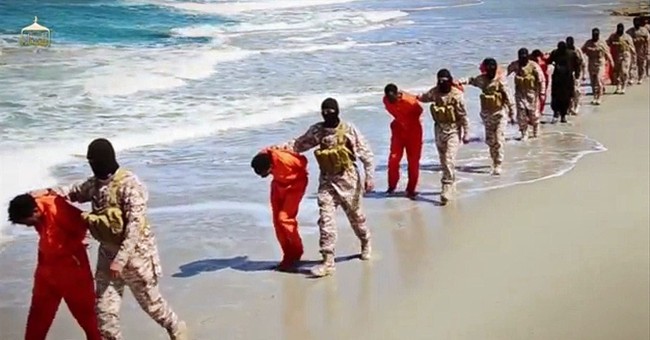 Headless bodies lie in the sand. Above those corpses stand the black-clad minions of ISIS, outlined against the coastline of Libya. This is the second video in three months depicting Islamic terrorists cutting the heads off of Christian captives.

Bodies float in the Mediterranean Sea, face down. Twelve Christian bodies, thrown from a rubber boat by 15 Muslims. Their launch point: Libya.

Approximately 700 more bodies float face down in the Mediterranean, victims of a smuggling operation gone wrong when their rickety craft sunk as it made its way to Italy. Its source location: Libya.

These are the wages of Hillary Clinton's war.

In June 2006, as then-Senator Hillary Clinton, D-N.Y., prepared a run for president, she stated that President George W. Bush had "rushed to war" in Iraq. A few months later, Hillary spoke of her opposition to Bush's surge in Iraq, stating that it was a "losing strategy." Iraq, a war for which Hillary voted, had been conducted on the back of flawed intelligence estimates and without a clear plan.

Five years later, Secretary of State Clinton rushed to war, allegedly manufacturing evidence to do so, and with no plan whatsoever for victory. According to The Washington Times, Clinton "was the moving force inside the Obama administration to encourage US military intervention to unseat [dictator Moammar Gadhafi] in Libya." Clinton claimed that if the West did not intervene in Libya, Gadhafi would pursue a genocide against his enemies; in March 2011, she imagined a scenario in which "Benghazi had been overrun, a city of 700,000 people, and tens of thousands of people had been slaughtered, hundreds of thousands had fled. ..." That genocide never materialized, nor did the best intelligence estimates support that argument.

Not only that: Hillary also ignored all available evidence suggesting that the Libyan opposition was honeycombed with terrorists. She ignored Admiral James Stavridis, NATO Supreme Commander for Europe, who admitted "flickers in the intelligence of potential al Qaeda, Hezbollah." Al-Qaida backed the Libyan uprising. There was a reason that neither Hillary nor President Obama risked going to Congress for approval of the Libyan adventure: they would have been rejected.

Nonetheless, in October 2011, Hillary arrived in Tripoli to declare victory, stating that she was "proud to stand here on the soil of a free Libya." When Gadhafi was sodomized with a knife and killed two days later, she laughed uproariously on camera: "We came, we saw, he died!"

Gadhafi wasn't the only person who died. Hillary's war ended with terrorist chaos in Libya: a full-scale terror takeover of regions of the country including Benghazi, the exile of the legitimate government, a massive refugee crisis growing day-by-day amidst the upheaval. That refugee crisis has grown significantly worse since Hillary's war. As Vox.com, a leftist outlet, points out, 1,600 migrants "have drowned in the Mediterranean this year." Why? Again, according to Vox.com, when Moammar Gadhafi "ruled Libya, his government had an agreement with Italy to try to intercept and turn back ships leaving for Europe. ... And in the utter chaos that's engulfed Libya over the past few years, there's no government entity really capable of patrolling the Mediterranean."

Hillary Clinton's foreign policy has promoted chaos around the world. Nowhere is that better illustrated than in her signal foreign policy legacy, the collapsed state of Libya.