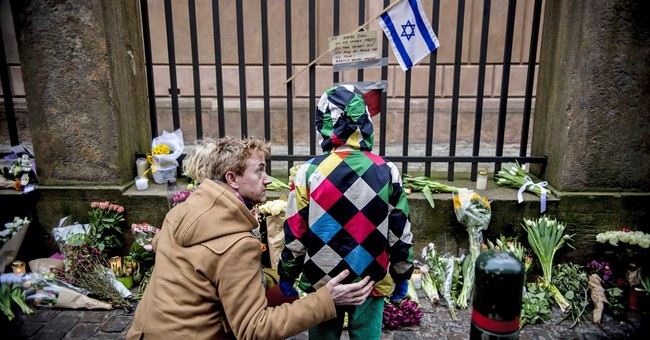 In the aftermath of the killing of a man at a Copenhagen synagogue by a member of the Religion of Peace, Israeli Prime Minister Benjamin Netanyahu said, "This wave of attacks is expected to continue. Jews deserve security in every country, but we say to our Jewish brothers and sisters, Israel is your home." Russian emigre Natan Sharansky echoed Netanyahu's call, stating, "There is no future for Jews in western Europe."

In response, European leaders shouted down Netanyahu. "We know there are doubts, questions across the community," said French President Francois Hollande, who was elected with in excess of 93 percent of the Muslim vote. "I will not just let what was said in Israel pass, leading people to believe that Jews no longer have a place in Europe and France, in particular." The same week, Jewish tombstones were spray-painted by the hundreds in eastern France.

But undoubtedly, European anti-Semites will now claim that Netanyahu's comments simply demonstrate why Europe must force out its Jews: because Israel is just so awful. That, at least, is what a German court in the city of Wuppertal concluded after convicting two German Palestinians of setting fire to a synagogue. The Wuppertal court stated that the men were simply attempting to bring "attention to the Gaza conflict." In other words, Jews are fair game because of Israel.

But it's precisely the reverse that is true: Israel is fair game because it is Jewish. This is the dirty little secret of anti-Israel policy: It is almost entirely anti-Semitic policy. That is why Muslims attack Jewish synagogues in Paris during the Gaza war: because Israel is a stand-in for the Jews, not the other way around. Were Israel a Muslim country, the rest of the world would see it as a beacon of light and hope for the future of an entire religion. Because it is Jewish, Muslims target it for destruction, and the rest of the world tut-tuts Israel's nasty habit of attempting to survive. The extra-American world hates Israel because it is Jewish. It does not hate Jews because of Israel. Israel is merely a convenient excuse.

Ironically, radical Muslims, in targeting Jews throughout the world, reinforce the necessity of a state of Israel. Their argument seems to be that Israel is an unnecessary Jewish nationalist cancer; to prove that argument, they suggest killing Jews all over the planet, leaving no place safe for Jews except for Israel.

And so Jews go to Israel by the droves. European governments can rip Netanyahu all they want for his supposedly brusque dismissal of European tolerance, but that supposed tolerance means less and less when Swedish Jews abandon entire cities as the authorities make way for radical Muslims. European governments can condemn the Gaza war, but Jews see that war for what it was: an exercise in Jewish self-preservation, with the Europeans once again attempting to prevent such self-preservation.

Unlike the Europeans, Americans continue to side with Israel because America is founded on Judeo-Christian principles. America embraces Judaism, and so it embraces Israel, not the other way around. The formula is simple: Love Jews; love Israel. Hate Jews; hate Israel. Opposing Israeli action may not be anti-Semitism, but it sure does have a funny habit of backing the agenda of anti-Semites.