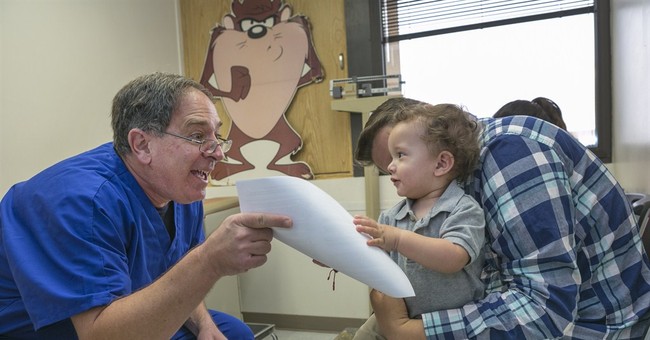 This week, controversy broke out over whether state governments have the power to require parents to have their children vaccinated. New Jersey Governor Chris Christie, no stranger to compelling his citizens to stay off the roads during blizzards, announced that he had some sympathy for the anti-vaccination position: "I also understand that parents need to have some measure of choice in things as well. So that's the balance the government has to decide." Kentucky Senator Rand Paul doubled down on Christie's remarks, stating, "I have heard of many tragic cases of walking, talking, normal children who wound up with profound mental orders after vaccines. ...The state doesn't own your children."

Christie and Paul aren't the only politicians sympathizing with anti-vaccination fanatics; in 2008, then-Senator Barack Obama repeated widely debunked claims of links between autism and vaccination. Skepticism of vaccination crosses party lines, unfortunately -- although the most organized anti-vaccination resistance comes from the New Agey left in places like Santa Monica and Marin County, who worry more about infinitesimal amounts of formaldehyde in vaccines than about death by polio.

Unsurprisingly, older Americans believe that children should be vaccinated against diseases like measles, mumps and whopping cough, by a 73 percent to 21 percent margin. Americans 18-29, by contrast, believe by a 43 percent to 42 percent plurality that government should not mandate such vaccinations.

That's because young people don't remember a time when such diseases claimed lives. They don't remember a time when the vast majority of Americans weren't vaccinated. Older people do. Many of them lost loved ones to polio and measles and mumps and rubella. In 1952, over 3,000 Americans died of polio and well over 21,000 were left with mild or severe paralysis. Thanks to Dr. Jonas Salk's vaccine, there have been zero cases of natural polio in the United States since 1979.

The same is true of measles. According to Dr. Mark Papania of the Centers for Disease Control and Prevention, more than 90 percent of Americans suffered from the measles by age 15 before widespread vaccination beginning in 1962. From 1956 to 1960, he reports, "an average of 542,000 cases were reported annually." That included 450 deaths per year, as well as 150,000 cases of respiratory complications and 4,000 cases of consequent encephalitis per year, many of which resulted in later death. Then mandatory vaccination kicked in. Until a major upswing in 2014, we averaged less than 100 cases of measles per year in the United States since 2000.

The point of mandatory vaccinations is not merely to protect those who are vaccinated. When it comes to measles, mumps and rubella, for example, children cannot be vaccinated until 1 year of age. The only way to prevent them from getting diseases is to ensure that those who surround them do not have those diseases. The same is true for children with diseases like leukemia, as well as pregnant women. Herd immunity is designed to protect third parties.

But Americans have short memories and enormous confidence in junk science. Parents will ignore vaccinations but ensure that their kids are stocked up with the latest homeopathic remedies, Kabbalah bracelets and crystals. St. John's wort, red string and crystals all existed before 1962. They didn't stop the measles. Vaccination did.

That doesn't mean that all vaccinations should be compulsory, of course. There are certain diseases that can only be transmitted by behavior, like HPV. There are others that are too varied for effective herd vaccination, like the flu shot. But when it comes to measles and mumps and rubella and polio, your right to be free of vaccination -- and your right to be a dope with the health of your child because you believe Jenny McCarthy's idiocy -- ends where my child's right to live begins.