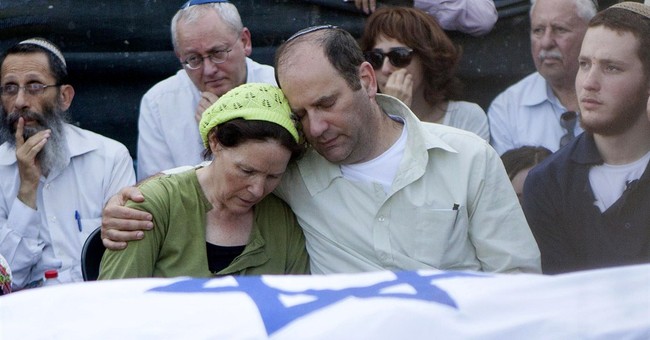 On Monday, three Jewish boys were found dead, murdered by the terrorist group Hamas: Eyal Yifrach, 19; Gilad Shaar, 16; and Naftali Frenkel, 16. Frenkel was an American citizen. The three were kidnapped while hitchhiking some three weeks ago. In the interim, President Barack Obama said nothing about them publicly. His wife issued no hashtags. His State Department maintained that $400 million in American taxpayer cash would continue to the Palestinian unity government, which includes Hamas.

Presumably Frenkel did not look enough like Barack Obama's imaginary son for him to give a damn. Or perhaps Frenkel hadn't deserted his duty in the American military, and therefore his parents didn't deserve a White House press conference. Maybe Michelle Obama was too busy worrying about children's fat thighs to spend a moment tweeting out a selfie to raise awareness.
Or maybe, just maybe, the Obama administration didn't care about Frenkel because he was a Jew.
Jewish blood is cheap to this administration. That seems to be true in every administration, given the American government's stated predilection for forcing Israel into concessions to an implacable and Jew-hating enemy. But it's particularly true for an administration that has now cut a deal with Iran that legitimizes its government, weakens sanctions, and forestalls Israeli action against its nuclear program. It's especially true for an administration that forced the Israeli government to apologize to the Turkish government for stopping a terrorist flotilla aimed at supplying Hamas. And it's undoubtedly true for an administration that has undercut Israeli security at every turn, deposing Hosni Mubarak in Egypt, fostering chaos in Syria and by extension destabilizing Jordan and Lebanon, and leaking Israeli national security information no less than four times.
Now the corpse of a 16-year-old Jewish American is found in Hebron.
The Obama administration's first response: to call on the Israeli government for restraint. State Department spokeswoman Jen Psaki said on June 2, "Based on what we know now, we intend to work with this government." Now, just a month later, that government has murdered an American kid. And now she says that the Obama administration hopes "that the Israelis and the Palestinians continue to work with one another on that, and we certainly would continue to urge that ... in spite of, obviously, the tragedy and the enormous pain on the ground."
To which the proper Israeli response should be: go perform anatomically impossible acts upon yourself.
The Obama administration had the opportunity to stand clearly against Jew-hating evil. Not only did it fail to do so but it funded that evil, encouraged that evil, militated against fighting that evil. But that's nothing new. Jew hatred is as old as the Jewish people. It's just found a new home in the White House.