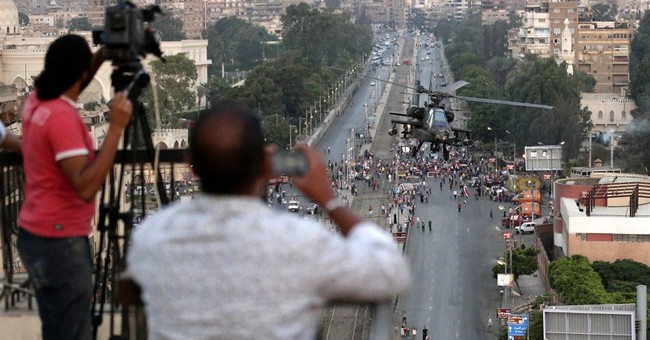 With the Egyptian military killing Muslim Brotherhood in the streets and Muslim Brotherhood members burning down churches and parading nuns through those same streets, President Barack Obama took to the microphone from a golf course in Martha's Vineyard to clarify America's perspective. Here were his inspiring words: "America cannot determine the future of Egypt. That's a task for the Egyptian people. We don't take sides with any particular party or political figure. I know it's tempting inside of Egypt to blame the United States or the West or some other outside actor for what's gone wrong."

There is a reason that many in Egypt are upset at the United States -- by taking no side, America is taking a side. Egyptian secularists feel abandoned by the United States, given rumors that the Obama administration now wants to cut off aid to the military; the Islamists rage against the American machine because the Obama administration did nothing to uphold President Mohamed Morsi's election.

Meanwhile, President Obama sails blithely along on the winds of self-assurance.

Thus far, the only common thread to the Obama administration's Middle East policy is Obama's unwillingness to pursue anything remotely representing an American interest. In Tunisia, President Obama said nothing about the collapsing rule of Zine El Abidine Ben Ali, a longtime American ally, until Ben Ali fled the country; then he celebrated. Within months, an Islamist party ruled the country. In Libya, President Obama hesitated when rebels began launching attacks against defanged dictator Muammar Qaddafi; then he stepped in and provided defense to those Islamist rebels. They promptly turned around and murdered four Americans in Benghazi. In Syria, President Obama sent Hillary Clinton out to tout Bashar Assad as a reformer; then he decided to give guns to the al-Qaida-aligned Islamist insurgency.

What were America's interests in these countries? President Obama never explained how the United States was better off with the Ennahda Party in power in Tunisia, Libyan Islamists ruling the countryside in Libya, and al-Qaida running Syria. But he did ensure that American aid kept flowing. In Egypt, however, Obama has cut off aid to the secularist military as they fight the Muslim Brotherhood.

America (SET ITAL) does (END ITAL) have interests in Egypt. Egypt's powerful military poses a regional counterbalance to Iranian ambition. Egypt's border with Israel has been Israel's most peaceful border for the past three decades. Egypt controls the vital Suez Canal, an artery for oil flow. But none of these interests seem to matter to President Obama, who doesn't want to take sides. He seems indifferent as to whether Islamists control the canal, the missiles and the government. Churches burn; Obama fiddles.

And Obama doesn't merely fiddle -- he does so in authoritarian fashion. If he wanted to cut off aid, all he had to do was declare Egypt's coup a coup -- but that would be tossing power back to Congress. Instead, he cut off aid (SET ITAL) and (END ITAL) declined to declare a coup a coup, essentially stating that all foreign policy funding should run through him personally. If he wakes up on the other side of the bed, the Muslim Brotherhood may find itself on the short end of the stick again.

Unpredictability makes for instability. Nowhere has that been truer than in the volatile Middle East. Adding the wavering president's oddball views of foreign affairs to the mix is a recipe for disaster.