Is Obama Breaking the Law? 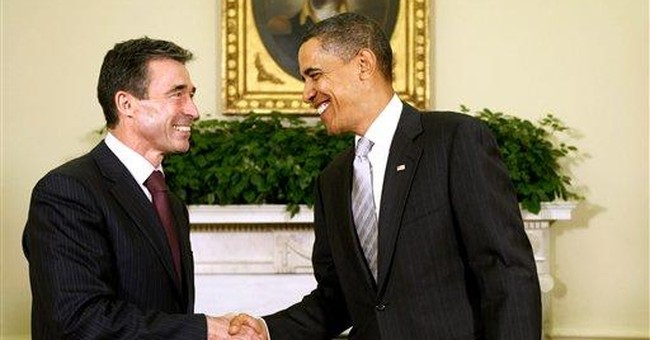 In March 1850, Karl Marx spoke to the Central Committee of the Communist League. In order to bring about true change, Marx stated, the world needed not a massive, singular upheaval, but a "permanent revolution." The revolution would not be accomplished in a moment; it could be accomplished only through renewed and constant dedication to a political program, by a constant attempt "not to improve the existing society but to found a new one."

President Obama is not a communist, although he certainly has a soft spot for communists ranging from Van Jones to Frank Marshall Davis. Obama is, however, a devotee of the Marxist philosophy of politics: permanent change. Or, in his case, permanent campaigning on change.

While most presidents enter the White House and begin to engage in the business of executing the laws faithfully, President Obama has seized the massive power of the Oval Office to launch an unceasing, relentless campaign for his own re-election. He has used taxpayer money to pay off his friends and allies, ensuring that they remain in his camp. He has used the weight of the federal government to quash his private sector foes. And he has used the might of his office illegally, encouraging federal agencies to coordinate with "community organizations" in working with private actors to push the Obama agenda.

Obama's buddies from the nonprofit world were there, too: Michelle Miller of the Service Employees International Union (SEIU), a group that spent almost $61 million on behalf of Obama's election in 2008 and is closely allied to the disgraced ACORN; Sally Kohn of the Center for Community Change, a far-left organization in support of illegal immigration and nationalized health care.

The meeting was dedicated to putting community organizers and artists in the same room, with the tacit promise of funding from the NEA ever present. According to the report, that promise was actually more than tacit: Garcia Durham allegedly told the assembled crowd that "government and its policies should be shaped by participants' voices in connection with the NEA."

There's only one problem with this: it's illegal. Under the Anti-Lobbying Act, government employees may not expressly urge individuals to "contact government officials in support of or opposition to legislation." Nor may they “provide administrative support for lobbying activities of private organizations." Under the Hatch Act, similarly, federal employees cannot solicit or discourage participation in political activity for anyone under consideration for a federal grant or contract.

Under the regulations of the Office of Management and Budget, all charitable 501(c)(3) organizations -- organizations like the Center for Community Change -- are forbidden from receiving funds that go to "the enactment or modification of any pending federal or state legislation by preparing, distributing or using publicity or propaganda." All of these laws may have been violated.

This isn't just about violation of federal law, however. This is about an administration that sees no problem with using its resources to entrench an extra-governmental mass movement it can mobilize at a moment's notice. President Obama himself has endorsed that strategy, keeping his non-governmental "Organizing for America" program up and running.

President Obama campaigned on change. He's echoing Marx in his embrace of perpetual change. What's more, he's abandoning his commitments to transparency and honesty by utilizing base political graft to achieve his permanent revolution.