GOP Primed to Take Back Pennsylvania 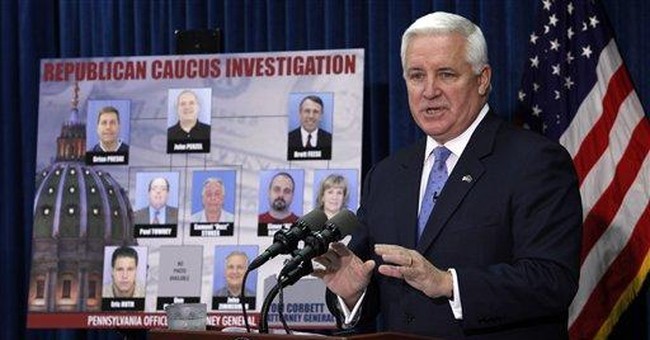 Just ahead of redistricting, Republicans are in prime position to win the governor’s mansion and both chambers in the Pennsylvania General Assembly.  Additionally, Republican U.S. Senate candidate Pat Toomey appears to be on the verge of boosting GOP gains in the Keystone State.

Political prognosticator Charlie Cook currently rates the governor’s race in which GOP nominee Tom Corbett has mounted a stellar campaign, as “Lean Republican.”  Several polls indicate that Corbett has opened a wide lead over his opponent.  In the state Senate, Republicans control 30 of the 50 seats, leaving that majority safely in the GOP’s hands.  The House is closely split with 104 Democrats and 99 Republicans, meaning a pick-up of three seats will change the balance of power in the lower chamber.

The result of such a change “could bring sweeping policy changes to a state that can't seem to make up its mind whether it wants to be blue or red,” reports The Associated Press.  “[T]he outcome of legislative races could largely determine what the state does about its multibillion-dollar budget shortfall, the funding crisis for public-sector pensions and redistricting — not to mention the thousands of bills lawmakers will introduce during the coming two-year session.”

According to political scientist Terry Madonna, “public opinion research shows an enthusiasm gap, with Republican voters more likely to vote this fall, and independents leaning Republican.” This factor clearly favors Republicans, who “are salivating at the chance to parlay a favorable national political climate into a return after four years to majority status.”  Further, Rep. Dave Reed, the GOP’s point man on House campaigns said, “‘We've got a menu of seats we can win from.’”

The New York Times recently detailed the impact that a GOP sweep would have on Pennsylvania’s U.S. House seats.  “[O]n the eve of redistricting, when the state is likely to lose another Congressional seat, the Democratic hold is looking tenuous.”  With less than two months before Election Day, outgoing Democratic Governor Ed Rendell senses that things don’t look good for his party’s chances in November.  “‘The Democrats are generally tarred with the brush of incumbency, and when the economy is bad and people are losing their homes, their 401(k)’s, their investments, there is a tendency to lash out at those in power,’” Rendell said, “‘I think that’s advantaged Republicans.’”

One such Republican looking to capitalize on the Keystone State’s political landscape is the GOP nominee for the 161st House District, Joe Hackett.  In 2008, Hackett narrowly lost his bid for this seat but with the incumbent Democrat seeking higher office, the 26-year veteran of federal and state law enforcement is poised to win this time around.

Harping on the failed Democratic leadership in Harrisburg, Hackett told the Delaware County Daily Times, “‘When the governor fails to sign into law a state budget on time, it has impacts that go far beyond layoffs of state workers…thousands of local parochial school students went for up to two months without text books due to the lack of state funding.  We cannot allow this to happen again.’”

While President Obama and other national Democratic leaders make repeated visits to Pennsylvania in an effort to quell voter angst, Republicans are poised to sweep the state giving future officeholders, such as Joe Hackett, a huge opportunity to enact “meaningful change.”

To learn more about Joe Hackett’s bid in the Keystone State, visit http://www.hackett2010.com.