The Return of the One-room School

Barney Brenner
|
Posted: Mar 20, 2021 12:01 AM
Share   Tweet
The opinions expressed by columnists are their own and do not necessarily represent the views of Townhall.com. 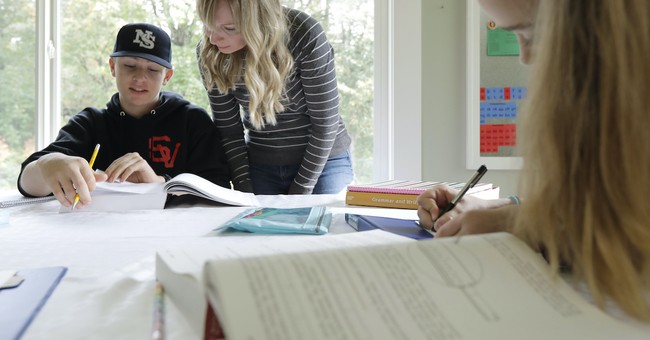 And not only might it be in your own living room, but it could become an excellent pathway toward taking back our beloved Republic from the insidious forces which have lurched us to the left for decades.

There are compelling reasons for parents to yank their kids from the typical school, especially for those who love America and its founding values and principles: the rampant teaching that the United States is a racist and evil country and has been from its very beginnings, the precipitous decline in academic rigor and results which has increasingly plagued our schools for generations, and the evolving gender-dysphoric unisex-education courses with their abhorrent bathroom and locker-room policies which imperil female pupils in particular.

All this is the outcome of our public education system having been hijacked by the radical Left. (As an aside, when you see the term “public” school, think “government” school, with all its attendant implications and drawbacks.)

Author, educator and talk-show host Dennis Prager uses inclusion of The New York Times’ widely discredited “1619 Project” as a benchmark for whether you should remove your child(ren) from the public schools.

For those unfamiliar with this travesty of teaching, it posits that slavery, not liberty, was our founding principal; that our War of Independence from Britain was fought to preserve that institution; and that despite slavery being a virtually universal practice for all of recorded history (which we were among the first to abolish), we bear unique responsibility for it and repercussions from it must be atoned for to this very day.

And it doesn't require the “1619” title for your child to be exposed to this nefarious curriculum. Elements of that dogma in the schools predate the August 2019 introduction of this dishonesty by the Times. The same removal admonition holds true for “Critical Race Theory,” the doctrine that the U.S., a country where minorities have unprecedented freedom and opportunity, practices white privilege and white supremacy, and that our institutions, laws and our very founding were and are inherently racist and are used to the advantage of whites. And to cloak the presence of this insanity, that curriculum is often inserted under the banner of “diversity, equity and inclusion” or “iCivics.”

For a preview of what may lay ahead with the change of administration, note that Kamala Harris praised these teachings in a 2019 tweet, stating, “The #1619Project is a powerful and necessary reckoning of our history. We cannot understand and address the problems of today without speaking truth about how we got here.”

Virtually every nation on Earth teaches the magnificence, real or contrived, of their own country, whether they're mediocre, excellent or horrid. Even North Korea, the deepest hell hole on the planet instructs their students that their decrepit state is as good as it gets and their “Supreme Leader” has been divinely mandated.

So what does the U.S., the greatest nation in history do? The Left is telling our kids how horrible we are, have always been, and, using revisionist garbage from The New York Times and other sources, is rewriting our past. It’s reminiscent of the bygone USSR, where a common cynical comment was, “In Russia, the future is known. It’s the past that keeps changing.”

For those of us who wish our kids to learn to think insightfully, to accurately know our history, and to acquire the fundamentals of scholastic ability – commonly referred to as the three Rs – the choice is clear: we must transfer our children to well-grounded private, charter or home schooling. And here’s the key to opening the floodgates: at least a significant portion of the funding from the government school systems MUST follow the student to whichever learning environment parents choose. This cannot be overstated, as it is the path toward growing neighborhood home schools and hiring teachers or paying parents to run them and thus accommodating increasing numbers of students. (Any objections to paying back parents, with their own money, mind you, overlooks the fact that every parent is a teacher by necessity.)

Arizona likely has the most forward-thinking options available to K-12 kids. Not just deductions but tax credits are available to individuals and corporations for funding the education of any student. Additional credits are given for special categories including kids of military parents and those with special needs, impaired vision, other disabilities, in failing public districts, with certain qualified siblings, and reservation residents.

All that said, options for home school funding, even with pending legislation, covers but a tiny fraction of the school-age population. In spite of the fact that each child leaving district schools lessens the burden on government, the tooth-and-nail fighting to prevent such remuneration is intense. Critics of using tax money (read taxpayers money) for private, charter or home-schooling alternatives gloss over the fact that not all of each student’s funding would follow them. This then leaves a higher per-pupil budget for the remaining public attendees, so objections on fiscal grounds ring hollow. But there's something more important to the Left than money: ideology and control, which they are loath to relinquish. So this process will be a battle royal – but well worth fighting if we’re to reverse our national decline.

And hysterical rantings about destroying the cherished public schools are just that. If anything, the academic competition could force a welcome improvement in the government school system as an effort to stem any exodus. School boards have authority to change course.

Vladimir Lenin, the first dictator of the Soviet Union, knew that if you get kids early enough, you will indoctrinate them for life. He famously said, “Give me four years to teach the children and the seed I have sown will never be uprooted.” In our country, the Left has been doing this for decades, to our ongoing detriment. It must stop now or the plunge will be permanent.

With per-pupil budgets nationwide ranging from around $10,000 to over $30,000, any reasonable fraction of that money following the students home would represent a tectonic shift in education and funding structures. And great curricula for home teaching are available. The launching of PragerU Resources for Educators & Parents (PREP) promises to provide great material to home-schoolers. Hillsdale College’s Barney Charter Schools (coincidentally named) has taken root in numerous states and that institution has excellent home school resources as well.

Patriotic parents and religious families should strongly consider leading the charge. Their futures depend on it. And everything must be brought to bear on red state legislatures as they can be the catalysts. If this potential sea-change is successful, then the next generation of Americans will be yet another which understands the legacy they have inherited and they’ll be the ones to restore our country to its shining city status.