A Case for Carson 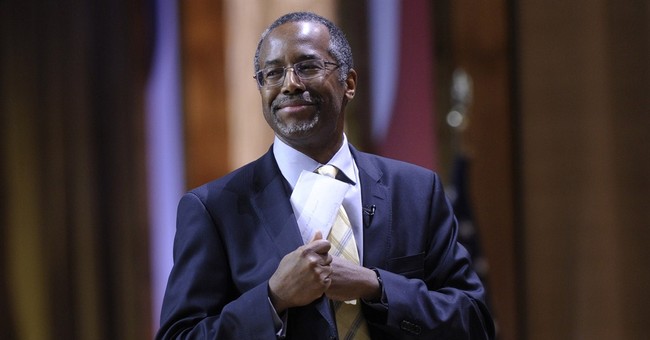 The objections are clear enough. Dr. Benjamin Carson has had no direct political experience. He’s never even run for, let alone held, public office. And the presidency is no place for novices.

Those points may be valid – to a degree.

But our country, at the hands of people with LOTS of political experience, has been steering a dangerous course – under administration of both parties – toward ever-increasing federal spending, regulation and debt, and the perception that there’s one set of rules for Washington DC and another for the rest of us.

We’ll know soon enough whether the new Congress will advance a change of direction or return to business as usual. But if it’s the latter, it won’t take a brain surgeon to realize that the remedy has to come from outside the District of – oh, wait a second!

While it might not take a neurosurgeon, the ability to speak persuasively has become indispensable in campaigns for high office. Another attribute, much needed but often absent, is wisdom. Dr. Carson has both of these qualities – in abundance.

The most famous request for wisdom to govern a people came from King Solomon, a man whose life was notably guided by God. When you look at the life of Ben Carson, you can’t help but see God’s hand there as well.

As a youth, a violent incident with a knife could have landed him in jail – or worse. Instead, it brought an epiphany which miraculously changed his life. His childhood schooling could likewise be considered extraordinary. He rose from the bottom of his grade-school class to achieve degrees from Yale University and from the University of Michigan Medical School.

His adult life has also been a series of miracles, most of them performed on others by his gifted hands.

But Carson enjoys other advantages not shared by the rest of the Republican field. There’s an army of many thousands of families, spread over all 50 states, who have literally been touched by this man – with lifesaving results. He and his wife Candy have a national scholarship organization. His growing following reaches across racial, ethnic and party lines. And although largely not in the political sphere, his life has had a multitude of leadership roles. He’s also a formidable fundraiser. Couple all that with a likeable presence and an off-the-charts life story and his appeal could leave all contenders in the dust.

Dwight Eisenhower was a leader in the modern era who went right to the top on his first foray into politics. But a comparison can also be made to a great president from earlier times who won the White House against the odds and when he was needed most.

Before his fortuitous presidential victory, Abraham Lincoln had won one Congressional race – and lost several, including an attempt at the US Senate. But he also had the gifts of oration and wisdom during a perilous period in our history.

Eisenhower, Lincoln and Carson all consistently surrounded themselves with the best people available, the former two for the field of battle, and Carson in the surgical arena. Those who seek the best counsel make the best leaders – and presidents.

And the precarious times we’re in – internationally, economically, medically, racially – calls for a top-notch team at the helm.

Some lament Carson’s lack of foreign policy experience. But he’s already spent more time in and spoken more favorably of our best ally in the Middle East, Israel, than the current Commander in Chief. He also comments more candidly and compellingly than Obama about Cuba, the Islamic State, Iran and Vladimir Putin.

Others have raised questions over a remark about guns he made to Glenn Beck.

Having seen urban carnage first-hand in the OR, his concern was only that weapons “don’t fall into the hands of criminal elements or insane people.” He further clarified his “desire to always defend the Second Amendment” and that he wouldn’t “allow a bureaucrat to remove any law-abiding citizen’s rights for any kind of weapon that they want to protect themselves.”

Pretty clear. And in short, a candidate that conservatives could rally behind.

After the malaise and pessimism of the Carter years, Reagan’s “Morning in America” was a welcome reprieve. We could benefit from a similar contrast two years from now.

The other Republican candidates have essentially been stalking horses for Dr. Carson. But we’ll know in the next few months whether he’s looking to emerge from the pack.

Without naming any presidential contenders, Rush Limbaugh this week was discussing racism, media and politics and stated that the “right conservative candidate” would have what Rush called “bust-out support” from voters nationwide.

I don’t see anyone who he’s more likely to be thinking of.