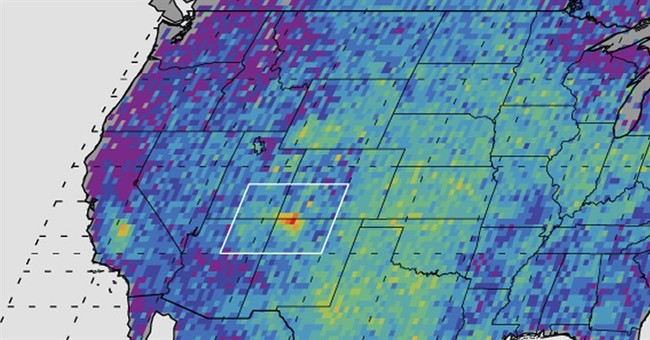 The Sunday Times headline smacked of conspiracy and governmental corruption: “Energy Firms in Secretive Alliance With Attorneys General.” The firms and the AGs have valid concerns that the EPA is grossly overestimating air pollution caused by energy companies order to place even more restrictions on US energy drilling and production.

The Times fretted instead that a complaint letter sent to Washington by the Oklahoma AG was drafted by industry lawyers. No insight from the article whether the letter was truthful or accurate. (The AG had edited the letter and made appropriate changes, but it was so well-researched and written, few were needed.)

And it takes some searching of the article’s internal links to get to the text of the letter. Readers who did would find it damaging not to the targets of the article but to the EPA. Judging from the 1500+ comments, few bothered.

Citizens, taxpayers and energy users (meaning all of us) should be cheering that there’s a new sheriff in town, actually a posse of attorneys general, who have the power to stand up against the overreach of Obama’s EPA.

In 2008, Obama famously declared war on coal. We now have more insight into his frack-attack: concerns in the letter were damning. Under Obama, the EPA changed its methods for measuring emissions to show 35 times as much discharge from conventional gas wells. For frack wells they multiplied prior results by 8850.

But wait, there’s more! Factor in multiple incorrect assumptions about how those emissions are managed and you get results which can fairly be trusted by no one. The obvious questions are, “Which of the wildly divergent estimates are correct, if either, and if the EPA can be so inaccurate in its assessments, how can we believe anything they say?”

In fact, the EPA has a history of playing fast and loose with facts in order to promote its current eco-fascist agenda. (For anyone bristling at that label, harsh socioeconomic and political control over industry and the livelihoods of citizens defines fascism. Throw in some environmental hysteria and the portrayal is complete.)

And they’ve been doing this – on steroids – for the entire six years of this destructive administration.

As part of its war on coal in Oklahoma and Arizona, the EPA wants to reduce haze, which not only has no defined health risks, but the measurements they’re using are similarly bogus. Of no concern to EPA bureaucrats are the devastating effects on struggling citizens, since Obama’s war may entail the closing of power plants which not only provide household electricity, but run pumps delivering water to southern AZ. The EPA also wants to burden almost the entire continental US with new ozone restrictions.

The fact is that the small amounts left of formerly significant pollutants are disproportionately expensive to address and their further reduction often confers no measurable benefits. But the human cost of regulation in diminished way of life is rarely considered.

The NY Times, never bothered by DC government’s growth, writes breathlessly of “the unprecedented, secretive alliance that [OK AG Scott] Pruitt and other Republican attorneys general have formed with some of the nation’s top energy producers [you know, the ones supplying us with electricity, fuel and the necessities of modern living] to push back against the Obama regulatory agenda.”

Apparently the unprecedented level of secrecy surrounding this administration has gone unnoticed by the Times. Big business is evil but not big Washington. The nearsightedness of major media would be laughable if so many folks weren’t its victims.

US citizens are sick of Obama’s overreach and in addition to giving Republicans a significant majority in the Senate in November, they also voted in state legislators, governors and attorneys general whom they hope have the will to stand up for and defend them from a regime which is, to our detriment, “fundamentally transforming the United States of America.” The implication that these elected officials will somehow roll over and allow environmental destruction is deceitful.

Should the Oklahoma AG have rewritten the “smoking gun” letter to have appropriate authorship? Perhaps. But the misdirection of fear and the hiding of issues of genuine concern has been a significant hallmark of the Times since at least the 1930s. The New York Times, which has had genuine plagiarism issues, has little authority to carp about this document.

And the real question remains. Does this EPA manipulate and falsify data and harm industry and citizen in pursuit of its eco-agenda?