Autry J. Pruitt
|
Posted: Apr 27, 2016 11:03 AM
Share   Tweet
The opinions expressed by columnists are their own and do not necessarily represent the views of Townhall.com. 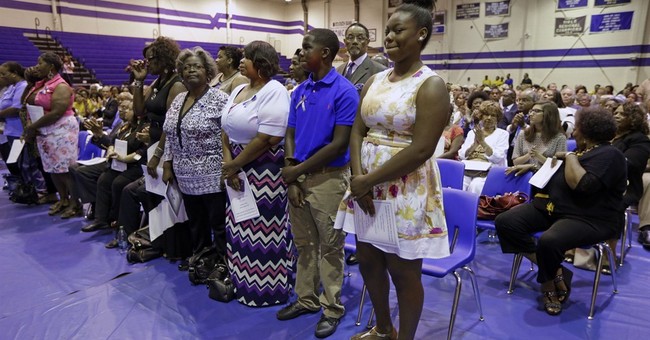 There’s a scene from the television show Blackish in which the character Andre Johnson, a black advertising executive, is approached by a white colleague seeking advice on a new ad campaign. After fumbling through a pathetic white-wimp-speaks-jive schtick, he finally tells Andre, “We wanted to know how you think a black guy would say ‘good morning,’”

After a moment of mock reflection, Andre replies, “Probably just like that.”

This vignette illustrates the dilemma Republicans face. Looking for ways to talk with African Americans, the GOP has turned to the opposition, in which we see Democrats like Hilary Clinton speaking with a fake black accent and telling an African American radio host she carries hot sauce in her purse. This is the false reality that many Republicans have bought into; that there’s some kind of secret code involved when talking with blacks. Remember the Ebonics craze?

I have news for my conservative friends; talk with blacks the way you would talk to anyone else. This may come as a shock but blacks vote their interests just like anyone else would. History confirms this. John Kennedy won only 68% of the “non-white” vote in 1960. Four years later, Lyndon Johnson won 94% of that same voter group.

What happened in the intervening years was the Civil Rights Act of 1964, legislative work on the Voting Rights Act, and LBJ's commitment to his Great Society. These were substantive actions that improved the lives of black Americans so it should surprise no one that Johnson was rewarded with a nearly 50% increase in the black vote.

The Civil Rights Act and the Voting Rights Act made an indelible mark on race relations but unfortunately, the war on poverty that Johnson embraced was little more than a bamboozling of African Americans. History confirms this as well. Fifty years and $22 trillion dollars later, the black family has been decimated by a system that encourages single parenthood and absentee fathers. Black wealth has eroded to an average of $11,000 compared with $97,000 for whites. Urban violence still haunts many communities, with blacks eight times more likely to be murdered than whites. Black unemployment is a national disgrace, hovering at more than 30% for black youth.

Current Democrat policies of pandering and peddling government trinkets are an absolute failure, meaning Republicans now have a reason to talk to blacks. The question is, do they have a way to talk with Black America? They do if they’re willing to explain policy and temporarily forsake the adulation to which they’re accustomed at campaign rallies.

Republicans can address black unemployment by explaining the racists roots of the minimum wage, and how a $15 minimum wage and provisions of Obamacare are strangling job growth in black communities. The GOP can lay out policies that promote and celebrate family as opposed those that encourage disfunction and heartache in African American households. Republicans should also push school choice - give every urban poor kid the same choice that rich white kids have.

These ideas must then be amplified. Television commercials and radio spots targeting African American voters are a start (please avoid the all-to-cliche urban black voiceover by a guy who doesn't speak English well). But the GOP must also be willing have the direct and difficult conversations that are necessary to get blacks thinking about conservative policies. Republicans must engage the likes of Eric Dyson and Ronald Martin. They have to interview with media figures like Tavis Smiley, and be prepared to suffer the boos and thumbs-down that may initially greet them. In short, Republicans can no longer let Hillary Clinton and the Democrat Party run away with the African American vote.

Be humble, but not apologetic, about ignoring the black vote. Address issues that are important to African Americans but don't just lean on the notion that, “we are all Americans,” because the uncomfortable truth is that most blacks don’t feel included as Americans. Don't tell us those feelings are illegitimate; acknowledge them and listen sincerely.

Some strategists will argue against this approach, claiming the optics of being booed by a black audience are untenable. However, I can say without reservation that the black community will give a Republican tremendous kudos for coming into the community, telling the truth as they see it and taking the punches. African Americans have always given "honor to whom honor is due,” and you will get credit beyond your belief and begin to open up a conversation.

This sort of approach would be unexpected for most GOP candidates, which is part of its tactical appeal. If Donald Trump has taught the Republican establishment anything, it is that one must own the news cycle, and one way of doing that is by doing and saying the unexpected with sincerity. This is what campaigning honestly and authentically in the black community would do. It would take Democrats by surprise, put the GOP on a path toward success, and restore the faith that America is the land of opportunity for all.

So when you see me on the street, don't give me a fist bump, Just say, "good morning.”